Politicians – Politicians from across the world. Including Abraham Lincoln, Charles de Gaulle and Indira Gandhi.

Famous Portuguese – a list of famous  Portuguese including the great explorers from the Age of Discovery. Also Christiano Ronaldo, Salazar, Jose Mourinho and Afonso I

Famous Russians – A list of famous Russians from Tsarist Emperors to composers and authors. Includes; Catherine the Great, Lenin, Stalin, Putin and Gorbachev.

Age of Discovery (15th – 17th Century) A period of exploration and maritime journeys across the world’s oceans to discover new land. The Age of Discovery led to increased trade and European settlements in Africa, Americas and Asia.

Famous people of the Gilded Age (1870 to 1900) The great industrialists, such as J.D. Rockefeller, J.P. Morgan and Andrew Carnegie who defined the Gilded Age.

Edwardian Age (1901 to 1914). A period of growth in science, technology and also rising tensions between the major powers. Also saw the ‘heroic age’ of exploration.

People of the Cold War (1948 to 1990) Famous people who participated in the Cold War between the Soviet bloc and the US/NATO allies.

People of the Twenty-First Century (2001 -) Politicians, musicians, authors, scientists and sports figures of the New Millennium.

Famous slaves – People who became well-known despite being kept in slavery. Including Moses, St Patrick, Spartacus and Nat Turner.

Other groups of people

Books that changed the world – Important books which influenced and changed society and the world. Including The Republic, The Iliad, The Communist Manifesto and The King James Bible.

Famous Composers – A list of famous and influential composers throughout history, including the greatest composers, such as Bach, Mozart, Beethoven, Brahms and Mendelssohn.

Famous intellectuals – Great intellects thoughout history and in particular during the Twentieth and Twentieth Century. Including Einstein, Newton, Descartes, Keynes and Milton.

Self-Made Men A list of men who have succeeded in the world starting from humble beginnings to become successful in different fields such as business, science, the arts and sport.

People who were born ahead of their time. A list of people whose ideas, actions and speech were not fully appreciated during their lifetime.

Young people who changed the world – A list of inspirational children and young people who have made a positive difference in the world.  Including Anne Frank, Malala Yousafzai

People who made a stand People who defied unjust laws and supported a particular principle, human right or justice.

Controversial people  A list of people who have courted controversy or whose opinions have divided the world.

Famous and iconic faces – A list of people with iconic and famous faces. Faces that represent beauty, ideals, suffering or illumination.

People who founded great Empires – A list of the principle figures who founded the world’s largest and most influential empires, including the Roman, Greek, British, Qin, Russian, Mongol and Mughul Empires. 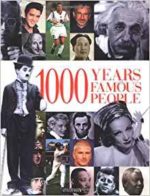 1,000 Years of Famous People at Amazon

Meet the movers and shakers of the last millennium in this comprehensive and detailed look at the famous, along with their achievements, and their legacies.