The Romantic period or Romantic era lasted from the end of the Eighteenth Century towards the mid 19th Century.

Romanticism was a movement which highlighted the importance of:

William Blake (1757 –1827) Poet, artist, and mystic. Blake wrote Songs of Innocence, Songs of Experience, The Four Zoas, and Jerusalem. Blake is not considered a classical, romantic poet, but his new style of poetry and mystical experience of nature had a significant influence on the growth of romanticism.

Robert Burns (1759 – 1796) Scottish romantic poet who was influential in the development of romantic poetry. He wrote in both English and Scottish and also contributed to radical politics.

Samuel Taylor Coleridge (1772 –1834) English romantic poet and a member of the “Lakes Poets.” Coleridge’s famous poems included The Rime of the Ancient Mariner, Christabel and Kubla Khan. Coleridge helped to bring to England the concept of German idealism. (an important strand of Romanticism)

John Keats (1795 – 1821) English Romantic poet. One of his best-known works is Endymion: A Poetic Romance (1817). Famous poems include; A Thing of Beauty (Endymion), Bright Star, When I Have Fears, Ode To A Nightingale.

Writers of the Romantic period

Sir Walter Scott (1771 – 1832) Scottish historical novelist, playwright, and poet. Scott’s novels gained a global appeal, and he was an important romantic novelist. Notable works include Ivanhoe, Rob Roy, The Lady of the Lake, and Waverley.

Honore de Balzac (1799 –  1850) French novelist and short story writer. Balzac was an influential realist writer who created characters of moral ambiguity – often based on his own real-life examples. His greatest work was the collection of short stories La Comédie Humaine.

Alexandre Dumas (1802 – 1870) Author of historical dramas such as The Count of Monte Cristo, The Three Musketeers, and the Marie Antoinette romances. Dumas was a larger than life character and influential writer.

Gustave Flaubert (1821 – 1880) Influential French writer who combined both literary realism with aspects of the romantic tradition. He is best known for his novel Madame Bovary (1857).

Writers of the American Romantic Era

Walt Whitman (1819 – 1892) American poet. Wrote Leaves of Grass, a groundbreaking new style of poetry. Whitman was a bridge between the movements of transcendentalism and realism. 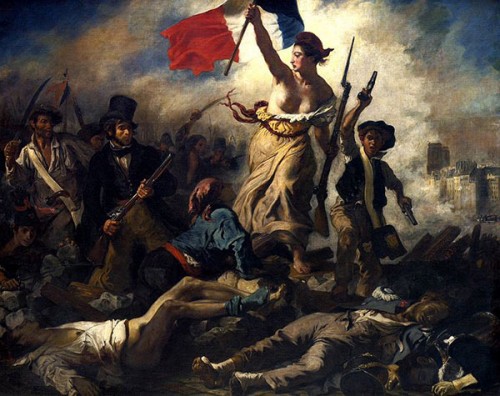 John M.W. Turner (1775 – 1851) British landscape artist. Known as the painter of light, Turner was an artistic figure from the Romantic period and one of the precursors to Impressionism.

John Constable (1776 – 1837) English romantic painter. Constable was noted for his landscape paintings of Dedham Vale – offering an idealised view of the countryside – one of the ideals of romanticism.

Composers of the Romantic period

Franz Liszt (1811 – 1886) Hungarian composer and virtuoso pianist. Liszt was a prominent member of the “New German School” of musicians. Significant compositions include; Piano Sonata in B minor (1853), “Liebesträume No. 3″.

Pyotr Tchaikovsky (1840 – 1893) Russian composer. Tchaikovsky was the greatest composer of the Romantic period. Compositions include the 1812 Overture, Romeo and Juliet Overture, Piano Concerto No. 1 in B flat minor and ballet compositions – Swan Lake and Nutcracker.

Gabriel Faure (1845 – 1924) French composer of the late Romantic period. Faure composed intimate Chamber music and many compositions for the piano. Famous works include choral masterpieces – Pavane and Requiem, and his Nocturnes for piano, such as Après un rêve” and “Clair de lune”.

Edvard Greig (1843 – 1907) Norwegian composer. Greig was one of the most notable composers of the Romantic period. Famous works include – Piano Concerto in A minor Op. 16, Peer Gynt Suite No. 1, Op. 46, IV. (In the Hall of the Mountain King) and Peer Gynt Suite No.1

Germany: Memories of a Nation

People of the Renaissance (1350s to 1650s) The Renaissance covers the flowering of art and culture in Europe. Primarily in art, but also in science.

People of the Enlightenment (1650s to 1780s) The enlightenment is a period which saw the growth of intellectual reason, individualism and a challenge to existing religious and political structures.