William Blake was one of England’s greatest poets. He combined a lofty mysticism, imagination and vision with an uncompromising awareness of the harsh realities of life.

“Tyger, Tyger, burning bright
In the forests of the night,
What immortal hand or eye
Could frame thy fearful symmetry?”

– William Blake – The Tyger (from Songs of Experience)

As a young boy, Blake recalls having a most revealing vision of seeing angels in the trees. These mystical visions returned throughout his life, leaving a profound mark on his poetry and outlook. William Blake was also particularly sensitive to cruelty. His heart wept at the site of man’s inhumanity to other men and children. In many ways he was also of radical temperament, rebelling against the prevailing orthodoxy of the day. His anger and frustration at the world can be seen in his collection of poems “Songs of Experience”

“How can the bird that is born for joy
Sit in a cage and sing?
How can a child, when fears annoy,
But droop his tender wing,
And forget his youthful spring!”

But as well as writing poetry that revealed and exposed the harsh realities of life, William Blake never lost touch with his heavenly visions. Like a true Seer, he could see beyond the ordinary world and glimpsed the light of the beyond.

“To see a world in a grain of sand
And heaven in a wild flower
Hold infinity in the palm of your hand
And eternity in an hour.”

This poem from Auguries of Innocence is one of the most loved poems in the English language. Within four short lines, he gives an impression of the infinite in the finite, and the eternal in the transient.

William Blake was born in London, where he spent most of his life. His father was a successful London hosier and attracted by the Religious teachings of  Emmanuel Swedenborg. Blake was first educated at home, chiefly by his mother.  Blake remained very close to his mother and wrote a lot of poetry about her.  Poems such as Cradle Song illustrate Blake’s fond memories for his upbringing by his mother:

His parents were broadly sympathetic with his artistic temperament and they encouraged him to collect Italian prints. He found work as an engraver, joining the trade at an early age. He found the early apprenticeship rather boring, but the skills he learnt proved useful throughout his artistic life.

During his lifetime Blake never made much money. It was only after his death that his genius was fully appreciated. His engravings and commissioned work drew enough money to survive, but at times he had to rely on the support of some of his close friends. Because of Blake’s temperaments, he was not always suited to maintaining friendships. On one occasion he got into trouble with the authorities for forcing a soldier to leave his back garden. He faced the possibility of jail, but through being his own defence counsel, he was able to gain an acquittal. Blake was very much a free spirit who readily spoke his mind, so much so that some acquaintances thought he was mad.

The esteemed poet, William Wordsworth, said on the death of Blake:

“There was no doubt that this poor man was mad, but there is something in the madness of this man which interests me more than the sanity of Lord Byron and Walter Scott.”

Blake died on August 12 1827; he was buried in an unmarked grave in a public cemetery and Bunhill Fields. After his death, his influence steadily grew through the Pre-Raphaelites and later noted poets such as T. S. Eliot and W. B. Yeats.

The Art of William Blake 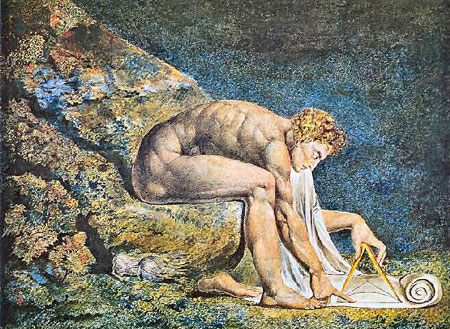 To See a World in a Grain of Sand