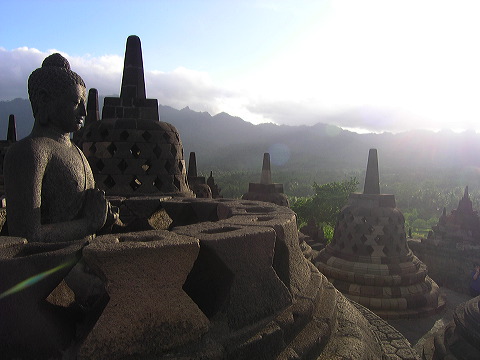 Buddha (c 560BC – c 460BC) Siddhartha the Buddha was a privileged prince who gave up his palatial life to become a wandering ascetic. After realising nirvana he spent the remainder of his life teaching and taking disciples.

Milarepa (c. 1052 – c. 1133) a Tibetan yogi. Milarepa underwent extreme austerities at the behest of his Guru. His devotion and discipline enabled him to be liberated and gain spiritual powers.

Dalai Lama (14th) (1950 – ) the leader of Tibetans both politically and spiritually. The Dalai Lama has practised non-violent opposition to Chinese rule, whilst maintaining Buddhist principles of compassion and forgiveness.

Thich Nhat Hanh (1926 – ) Vietnamese monk who inspired the movement of engaged Buddhism. Hanh has been a prominent peace activist and has written extensively on incorporating Buddhist teachings into everyday life.

Ashoka  (c 269 BCE to 232 BCE) – One of the greatest Indian rulers of all time. Ashoka the Great ruled from 269 BC to 232 BC he embraced Buddhism after a bloody battle and became known for his philanthropism, and adherence to the principles of non-violence, love, truth and tolerance.

U Thant (1909 – 1974) was a Burmese diplomat and the third United Nations Secretary-General. Dedicated to Buddhist teachings during his

Dr B.R. Ambedkar  (1891 – 1956) – Political activist and social reformer who campaigned for greater equality for ‘untouchable castes’ and women. He converted from Hinduism to Buddhism, feeling the religion was more suited to his understanding of equality, science and reason.