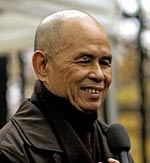 He lives in Plum Village spiritual community in the South of France and travels extensively giving talks on peace and spiritual values. He has been a lifelong peace-activist dedicated to finding peaceful solutions to conflicts. Thich Nhat Hanh has also written extensively on ways to find inner peace and inner happiness. He is credited with coining the term ‘Engaged Buddhism’ – a series of teachings which seek to bring practical Buddhist wisdom into daily life.

He was born Nguyen Xuan Bao, in the city of Quang Ngai in Central Vietnam in 1926. At the age of 16, he entered into a Zen Buddhist monastery and took the name Thich Nhat Hanh. As well as practising meditation, Thich Nhat Hanh founded the School of Youth for Social Service (SYSS) – this was a voluntary organisation which visited rural areas in Vietnam helping to provide education, healthcare services and improving local infrastructure.

In 1960, Thich Nhat Hanh moved to the US, where he studied comparative religion at Princeton University. Thich Nhat Hanh became fluent in several languages and was well versed in different religious traditions. During the 1960s, Thich Nhat Hanh was active in supporting fellow Buddhists who were supporting non-violent efforts to promote peace in Vietnam – a country racked by civil war. Despite not taking sides, Buddhists often faced censure from the South Vietnamese government who accused them of favouring Communists. In 1965, Thich Nhat Hanh issued an influential document ‘Call for Peace’. He wrote:

“It is time for North and South Vietnam to find a way to stop the war and help all Vietnamese people live peacefully and with mutual respect.”

Thich Nhat Hanh was also critical of the US involvement in the Vietnam war. In the mid-1960s, he became acquainted with Martin Luther King. Hanh urged King to speak out and denounce the Vietnam war. King was deeply moved by the requests and teachings of Hanh; in 1967, Dr King made his first statements criticising the war in Vietnam. At the time it was highly controversial, though as the war dragged on, American became increasingly wary of the conflict. Martin Luther King publically nominated Hanh for the Nobel Peace Prize in 1967,

In 1966, Hanh created the order of Inter-Being. This included a retreat centre in Plum Village, France. Later several centres were established around the world. The centres are open to both monks and lay people, who are able to visit for periods of retreat throughout the year. A diverse range of people have visited the Mindfulness centres, attracted by the opportunity to practise meditation and mindfulness. Hanh’s approach has been to combine different elements of Buddhist traditions, such as Zen and Mahayana.

“Many people think excitement is happiness…. But when you are excited you are not peaceful. True happiness is based on peace.”

Hanh has sought to concentrate on more practical elements of Buddhism and place less emphasis on dogma. His books such as Peace Is Every Step: The Path of Mindfulness in Everyday Life, The Miracle of Mindfulness and You Are Here: Discovering the Magic of the Present Moment, have become worldwide best-sellers.

A cornerstone of Thich Nhat Hanh’s teaching is the simplicity of being in the present moment.

“Breathing in, I calm body and mind. Breathing out, I smile. Dwelling in the present moment I know this is the only moment.”

“When we are mindful, deeply in touch with the present moment, our understanding of what is going on deepens, and we begin to be filled with acceptance, joy, peace and love.”

Because of his criticism of the Vietnamese government, Hanh was exiled from his native Vietnam for many years. His base became France, though he frequently travelled around the world. In 2005, he was finally able to return to his native Vietnam to establish new centres and publish some of his books in Vietnam.

Peace Is Every Step: Thich Nhat Hanh at Amazon