This is a list of the major periods in world history. It includes broad global eras, such as the Stone Age, Bronze Age and Iron Age. It also includes modern eras, which have lasted only a few decades, such as the Gilded Age, Progressive Age and the Information Age.

Stone Age (50,000–3000 BCE) The Stone Age refers to the broad range of ‘pre-history’ which lasted from approx 30,000 BC to 6,000BC, where the first metals started to be used. In the stone age, the use of metals was scarce, and the most common building materials and weapons were wood and stone. Much of this history is undocumented, though some archaeological evidence persists.

Bronze Age (3000–1300 BCE) The Bronze age refers to the broad period of history when cultures in Europe, Asia and other parts of the world made the first uses of bronze, from mining copper and tin. Bronze enabled more powerful tools and weapons. It was an age where the first writing systems became devised and used.

Iron Age (1200–230 BCE) The iron age was a period of economic development, where iron and steel enabled a greater use of metal tools which were stronger than previous Bronze Age items. The era led to developments in agricultural production, and we see the first evidence of written manuscripts, which includes great religious texts such as the Indian Vedas, (Sanskrit), and the Hebrew Bible.

Ancient Egypt (3000–300 BCE) Ancient Egypt was a civilisation which inhabited the banks of the Nile. Egypt was successful in using technology to increase agricultural production, giving spare labour for other pursuits, such as cultural, religious and military. Egypt was ruled by powerful Pharaohs, though there began a slow decline after being invaded by foreign powers. By 30 BC, Egypt fell under the rule of the Roman Empire.

Ancient India (7000 BCE or earlier to c. 500CE) Ancient India refers to a long period of history which includes the Vedic ages and the development of Indus and Aryan; it. Ancient India includes the period from the earliest Vedic sages and Vedas, and the great Indian epics of the  Ramayana and Mahabharata are said to have occurred. See: Famous Indians

Ancient Rome (8th Century BCE–476 CE) The Roman Empire was centred on the city of Rome and the Italian peninsula. Rome went through different phases, from classical Republic government to autocratic Emperors. At its peak, the power of Rome extended throughout the majority of Europe, laying many foundations of Western civilisations. Towards the end of the Roman Empire, it adopted Christianity as its official religion; this helped the religion to spread across Europe. See: Famous Italians

Middle Ages (Europe, 4CE–1500CE) Also known as the post-classical era. The Middle Ages stretches from the end of the Roman Empire and classical period and the Renaissance of the 15th Century. It includes the rise of Islam in the Middle East. The Middle Ages is often considered a period of relative cultural ‘darkness’, with severe wars (e.g. 100-year war, crusades), plagues, religious persecution and a relative lack of learning.

Islamic Golden Age (Middle East, 750CE–1300CE) This refers to a period in the Islamic World which saw a flourishing of science, mathematics, and preservation of classical writings, such as Aristotle. The Islamic Golden Age saw the creation of centres of learning, science, and culture, beginning with the House of Wisdom in Baghdad.

Age of Discovery (or Exploration) (Europe, 1400CE–1700CE) The Age of Discovery refers to a period in the late Middle Ages/Renaissance where foreign travel and discovery was an influential part of European societies. In the Age of Discovery, European powers discovered and settled in different continents, changing the fate of the Americas, Africa and Asia. It led to a global spread of Christianity and ideas of Western civilisation; it also marked the growth of the global slave trade. See: Famous explorers 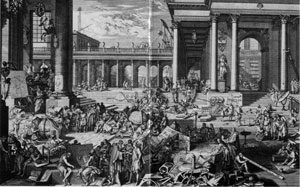 
The Romantic Era (1790s–1850s) Romantic poets (Blake, Keats, Coleridge, Wordsworth and Shelley) and Romantic artists, composers and writers. The Romantic era was partly a reaction against faith in reason alone. It was also a reaction to the industrial revolution, emphasising a faith in nature and man’s spiritual needs.

Industrial Revolution (1750s–1900) The industrial revolution is a phase of social development which saw the growth of mass industrial production and the shift from a largely agrarian economy to an industrial economy based on coal, steel, railways and specialisation of labour.

Age of Imperialism (c. 1700–1950s) The Age of Imperialism refers to the process of (mostly) European powers conquering and annexing other countries. Imperial powers ruled dominion countries directly. The most widely spread Empire was the British Empire, which at its peak covered 25% of the globe, in countries, such as India, the West Indies and parts of Australasia.

Inter-war era (1918–1939) A period of peace in between the two world wars. It was characterised by economic boom and bust, and the growth of polarising ideologies, in particular, Fascism and Communism.

Roaring Twenties (1919–1929) The roaring twenties refers to the period of rapid economic expansion and rise in US living standards. It also saw an emergence of new music and a decline in strict morality. The ‘Roaring Twenties’ was associated particularly with the East coast of the US and major European cities, such as Paris and London.

Great Depression (1929–39) The 1930s were a period of global economic downturn. Major economies experienced mass unemployment and stark poverty. It also led to the rise of political extremism, e.g. Nazi Party in Germany.

The Cold War (1948–1990) The Cold War refers to the period of ideological conflict between the Communist East, and Western democracies. The cold war saw a period of rising tension, especially over the proliferation of nuclear weapons. There was no direct war between the US and the Soviet Union, but both sides gave support to ideologically similar regimes in minor conflicts around the world. See: People of The Cold War

Information Age (1971–present)
The Information age refers to the new modern technologies which have shaped the modern world. These technologies include computers, the Internet and mobile phones. Key figures include business entrepreneurs, such as Bill Gates and Steve Jobs.

American Civil War (1861–1865) The American civil war was the intense fighting between the Federal army, led by President Abraham Lincoln and the Confederate armies of the South, who wished to break away from the union to defend slavery.


Reconstruction Era (1865–1877) The period of rebuilding in the south after the civil war.

Progressive Era (1890–1920) The progressive era was a period of political activism which included causes such as votes for women, labour and trade unions movements and civil rights. It also included movements to regulate aspects of Capitalism and big business.

Elizabethan period (England, 1558–1603) A period in English history marked by the rule of Queen Elizabeth I. It saw Britain emerge as a major world power. It also saw the English Renaissance, with figures, such as Shakespeare and William Byrd.

Victorian age (1837–1901) The Victorian Age co-coincided with the latter part of the Industrial Revolution. In Britain, it also saw the growing strength and extent of the British Empire. The Victorian Age is associated with a stricter type of morality.

Edwardian Age  (1901–1914) A period of growth in science, technology and also rising tensions between the major European powers. Also saw the ‘heroic age’ of exploration.

People of the Twentieth Century (1901–2000) Famous people of the turbulent century. Including Lenin, Hitler, Churchill, Roosevelt and Thatcher.