The Industrial Revolution was a period between the late 18th Century and early 20th Century, which saw rapid growth in mechanisation, industrial production and change in society.

Key features of the Industrial Revolution

Reasons for the Industrial Revolution

Important discoveries/inventions in the Industrial Revolution 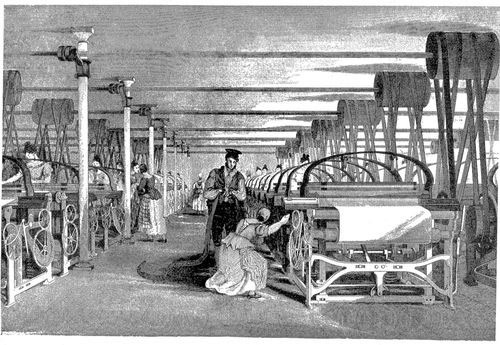 Problems of the Industrial Revolution

Burnley – shows the extent of pollution around 1900.

Benefits of the Industrial Revolution

Political movements of the Industrial Revolution

Marxism. At the height of the industrial revolution, Karl Marx wrote Das Capital and The Communist Manifesto. Marx argued capitalism was inherently unfair and he expected the workers (the Proletariat) to overthrow Capitalism.

Chartist meeting 1848, in London. The height of the Chartist campaign

Suffragette movement. Not directly related to the industrial revolution, but the late Nineteenth Century saw the emergence of women’s groups seeking to gain political rights for women.

Power loom weaving often seen as a threat by “Luddites”

Luddite Movement. Not a political movement, but more a direct action movement (primarily 1811-1819). This involved self-employed craft workers smashing machines, such as weaving looms and spinning frames, which they felt threatened their own job.

Industrial Revolutionaries: The Making of the Modern World 1776-1914

Industrial Revolutionaries: The Making of the Modern World 1776-1914 at Amazon

People of the Industrial Revolution (1780 – mid 19th Century) Famous industrialists, inventors and politicians of the period.

Victorian age (1837 – 1901) The principal figures of the Victorian age and the second half of the industrial revolution.

Inventors – Famous inventors, including many from the period of the industrial revolution.