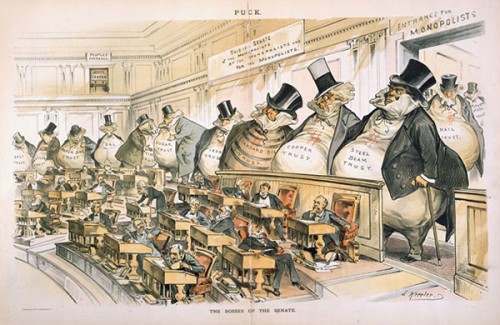 One of the defining elements of the Gilded Age was the railroad industry. Americans developed a love/hate relationship with the railroads. They transformed society enabling greater travel and economic growth, but they were also run by business magnates who wielded enormous power and could set high prices to farmers, suppliers and travellers. While the owners grew very wealthy, the industrial work was also very dangerous, with numerous accidents and relatively low pay.

Where did the phrase come from?

The phrase Gilded Age was coined by Mark Twain in  The Gilded Age: A Tale of Today (1873), which is a satire on materialism and political corruption. Twain probably got the phrase from Shakespeare.

“To gild refined gold, to paint the lily… is wasteful and ridiculous excess.”

Shakespeare’s phrase talks about the wasteful excess of gilding gold. This is an element of the Gilded Age – the greed of the rich who sought to increase their wealth at the expense of others – even though they were already very wealthy.

Key features of the Gilded Age

Positive elements of the Gilded Age

Negative elements of the Gilded Age America in the Gilded Age: Third Edition at Amazon

Famous people of the Gilded Age (1870-1900) – The great industrialists, such as J.D. Rockefeller, J.P. Morgan and Andrew Carnegie who defined the Gilded Age. Plus other political and cultural figures who were famous in this era.