Karl Marx (1818-1883) was a German political philosopher who laid a theoretical framework for Communism – a radical alternative to capitalist society. With his collaborator Frederich Engels, he wrote the best selling “Communist Manifesto” (1848) which sought to ferment Communist revolution around the world. Marx had a powerful influence over the ideological struggle of the twentieth century.

What did Karl Marx believe in?

In essence, Marx believed that Capitalism led to most workers living in poverty whilst the nation’s wealth was owned by just a few very rich capitalists. Marx believed this ever-increasing inequality would inevitably lead to the working class (proletariat) begin a revolution and overthrow the existing class structure and replace it with a Communist system where the means of production were owned by the state. In theory, this Communist system would lead to equality and fairness.

During his lifetime, Marx did not see any successful Marxist revolution and although many of his predictions proved false, it was a powerful ideology that  split the world into two differing ideological camps. It is also a very controversial philosophy as the Communist states of Soviet Union and China ignored democracy and human rights in their efforts to promote a ‘dictatorship of the proletariat.’

Karl Marx was born 5 May 1818, in Trier in western Germany. His father was a successful lawyer who had converted from Judaism to Christianity in order to help his law career.

At the age of 17, Karl Marx enrolled in the University of Bonn to study Law. He was not the most diligent student, enjoying drinking societies and meeting friends. His father eventually had him transferred to the University of Berlin, which had a stricter reputation. During his time at university, Marx increasingly became attracted to radical ideas and philosophies. He became aware of the widespread poverty and inequality of his native homeland. He saw the men in positions of power as hypocrites and felt the current syllabus of teaching inadequate for dealing with modern society.  For a time he associated with a group known as the ‘Young Hegels’ – those students who rejected the ideas of Hegel and sought a more radical interpretation of the world.

“The philosophers have only interpreted the world, in various ways. The point, however, is to change it.”

Karl Marx married Jenny von Westphalen, the educated daughter of a Prussian baron, on June 19, 1843. Shortly after this, he moved to Paris to escape the censorship of the Prussian government who were increasingly cracking down on left-wing agitators.

Paris in the 1840s was a hotbed of revolutionary activity. Here Marx met many similar revolutionaries such as Frederick Engels – an English radical. These two were to become lifelong friends and supporters; Engels would later become the chief financial support for Marx and his family.

In 1844, Engels wrote an influential book The Condition of the Working Class in England – which described the widespread poverty and exploitation of those working in the new urban industries. This helped Marx develop his idea of a proletarian revolution and he wrote his first work in 1844 – “Communism Economic and Philosophical Manuscripts“. This philosophical work sought to show Communism as a moral force for good to overcome the alienation of labour under capitalism.

Marx also became interested in the development of history and the changes which inevitably passed through society. He termed this idea – historical materialism. Marx increasingly began to believe that a Proletarian (Communist revolution) was not just desirable, but, an inevitable consequence of historical evolution.

This period led to Marx and Engel’s most famous work – A short pamphlet titled ‘ The Communist Manifesto‘.

“The Communists disdain to conceal their views and aims. They openly declare that their ends can be attained only by the forcible overthrow of all existing social conditions. Let the ruling classes tremble at a Communistic revolution. The proletarians have nothing to lose but their chains. They have a world to win. WORKING MEN OF THE WORLD, UNITE!”

Unlike the majority of Marx’s work, this Manifesto was short, to the point and included fiery, inspirational language, designed to awaken the desire for revolution.

After the revolutions which swept Europe in 1848, Marx increasingly found himself under suspicion and scrutiny from French and Belgian authorities. He decided to flee to London, England and continue his work from there. 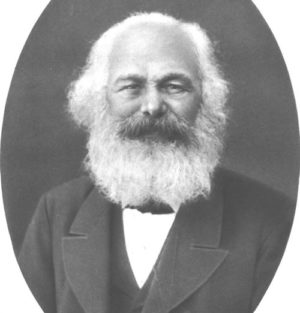 In London, Marx became more involved with the burgeoning Communist Movement. He was influential in the First Congress of the international, where he argued against the anarchist wing led by Mikhail Bakunin. Anarchists believed in a small state and power being decentralised. Marx’s version of Communism was a powerful state owning and managing the means of production.

Another influential event was the Paris Commune uprising of 1871. Though defeated after two months, Marx enthusiastically supported this as being a forerunner of future Communist revolutions.

Marx spent considerable time in the British Library researching political economy. This led to his deepest work – Das Capital – a dense and thorough examination of Capitalist society and economy.

“A commodity appears, at first sight, a very trivial thing, and easily understood.Its analysis shows that it is, in reality, a very queer thing, abounding in metaphysical subtleties and theological niceties.”

Marx also sought to examine all aspects of life from his new Marxist analysis. For example, he sought to show religion and patriotism were merely a tool of Capitalist society to keep the workers pacified whilst they were exploited by capitalists.

“Religious suffering is, at one and the same time, the expression of real suffering and a protest against real suffering. Religion is the sigh of the oppressed creature, the heart of a heartless world, and the soul of soulless conditions. It is the opium of the people. ”

— (Contribution to the Critique of Hegel’s Philosophy of Right)

Following the death of his beloved wife, Jenny, in 1881, Marx’s health deteriorated and he died from Bronchitis and Pleurisy in 1883. He was buried at Highgate cemetery London. 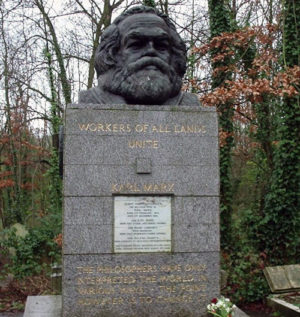 What is the Legacy of Karl Marx?

Marx predicted that in a capitalist society the working class would become ever poorer and the middle classes would become squeezed into either rich capitalists or poor workers. In reality, the opposite happened. The working class in western Europe and US saw rising living standards. Ironically, rising living standards and more education made workers more politically aware and this led to the birth of labour movements. However, in the west, Marxist inspired Communist parties generally struggled, with most workers preferring incremental change through the democratic process.

The most successful Communist revolutions were in the Soviet Union and China – two countries with an under-developed industry and limited working class. These revolutions were not so much led by the working class, but middle-class agitators with support from workers, soldiers and peasants. Lenin, the architect of the Soviet revolution was a devotee of Karl Marx and read his writings closely. Therefore, the writings of Marx definitely contributed to the development of the early Soviet model. However, after Lenin’s death, the Soviet Union was steered more by the personality of Stalin than Marxist teachings. Some defenders of Marx argue the Soviet Union was a travesty of Marx’s vision. Others argue that his call for revolution and a ‘dictatorship of the proletariat’ gave the Communist Party a theoretical justification for using censorship and repression to gain control – making a totalitarian state almost inevitable.

After the fall of the Soviet Union and China’s embrace of capitalism, the influence of Marx and Communism has waned. However, Marxism has left a lasting legacy on economics, politics and even sociology. Even if just as a reference point to criticise, Marxism and the idea of a radical alternative to existing society has a deep-seated imprint on western thought.

The Portable Karl Marx – Includes the complete Communist Manifesto and substantial extracts from On the Jewish Question, the German Ideology, Grundrisse, and Capital, a broad representation of his letters, and lesser-known works, especially his long-unavailable, early works at Amazon.com