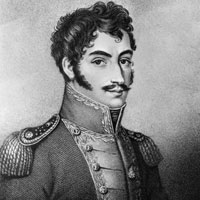 Simon Bolivar (1783–1830) was a Venezuelan military and political leader who was instrumental in helping Latin American countries achieve independence from the Spanish Empire. During his lifetime, Bolivar became known as ‘El Libertador’ through helping countries such as Venezuela, Colombia, Ecuador, Peru and Bolivia all achieve independence. Bolivar acted as a political dictator, but to some extent helped lay the foundations of democracy in Latin America. From 1819 to 1830 he served as president of the Hispanic-American republic known as Gran Colombia.

Simon Bolivar was born July 1783, in Caracas, Venezuela to wealthy aristocratic parents in Venezuela. His parents died when he was young, and he was largely brought up by his nurse, family friends and a series of instructors and educators. One of the most influential of his teachers was Don Simon Rodriguez, who taught the young Bolivar about the ideals of liberty, enlightenment and freedom. When he was 14, his mentor Rodriguez had to flee the country because he was under suspicion of plotting against the Spanish rulers. Bolivar entered the military academy Milicias de Veraguas, where he developed a passion for military strategy.

In 1799, he travelled to Europe to complete his education. Whilst in Madrid, he met Maria Rodriguez and they were married two years later. However, shortly after their marriage in January 1802, Maria contracted yellow fever and died. It left Bolivar emotionally distraught. He vowed he would never marry again and later commented that such a personal blow may have been a reason he threw his energies into politics and not domestic life.

“Look the way things are: if I were not widowed, my life would have maybe been different; I would not be the General Bolívar nor the Libertador,” – Bolivar, 1828

However, although he did not get married he did have several lovers and he became close to Manuela Sáenz who would later save him from an assassination attempt.

Bolivar then moved to Paris, where he continued to read the great enlightenment thinkers of Europe, such as Voltaire, Montesquieu and Rousseau, which had an important influence on his political beliefs. He became enamoured of the ideals and vision of the American and French revolutions. Also, it was in Europe, that the idea of gaining independence for Latin American countries became an aspiration. He met Alexander von Humboldt who had recently spent five years in south America, he remarked to Bolivar:

“I believe that your country is ready for its independence. But I can not see the man who is to achieve it.”

This thought stayed with Bolivar and on a visit to Rome, at the top of Aventine Hill, he made a celebrated vow that he would not rest until his fatherland had been liberated from Spain.

Whilst in Paris he witnessed the coronation of Napoleon. Bolivar was mostly impressed with Napoleon and felt that Latin America needed a similar strong leader. Unlike the United States, he worried that Latin America lacked the education and strength to cope with full liberty.

In 1807, Bolivar returned to Venezuela via the United States. He found that the Spanish colonies were increasingly agitating for independence. When a triumphant Napoleon deposed the Spanish Royal family from political power, people in south America saw it as an opportunity to assert their independence from Spain. Bolivar became heavily involved in the movement for independence and in 1810, he was chosen to go on a mission to Britain to seek military and financial support in their campaign for independence.

Bolivar returned in 1811 and found the country debating whether to declare independence. He spoke passionately in favour. After a vigorous national debate, the Venezuela national assembly declared independence on 5 July 1811. Bolivar was overjoyed and to mark the occasion, he freed all the slaves in his family and called for the end of slavery in the western Hemispher. Bolivar then joined the Venezuelan army, but by 1812, the Spanish had regained control and Bolivar escaped to Cartagena in New Grenada. In New Grenada, Bolivar wrote, “The Cartagena Manifesto” in which he called for renewed efforts for Venezuela to regain its independence from Spain.

“A people that love freedom will in the end be free. We are a microcosm of the human race. We are a world apart, confined within two oceans, young in arts and sciences, but old as a human society. We are neither Indians nor Europeans, yet we are a part of each.” – Bolivar, Letter from Jamaica, 1815

In 1813, he was given his first military command in leading revolutionary forces to liberate Venezuela from forces loyal to the Spanish king. He was successful in several battles and was able to enter Caracas as a ‘liberator’ on 6 August 1813. After taking control, he assumed the role of dictator. However, this first restoration of the republic was short-lived – many fellow citizens were nervous about the revolutionaries and preferred the stability of Spanish rule that they were used to. It led to a bitter civil war, where Spanish led forces succeeded in driving Bolivar out of Venezuela, and he fled to New Granada for a second time. In New Granada, he outlined more of his political thinking and sought to gain support from Great Britain who he admired for its political stability. He also spoke in terms of international solidarity and talked about the shared bonds of peoples who love freedom. But, concerned with problems near at home Great Britain (or the US) were unwilling to send any aid.

In 1816, with the help of forces from Haiti and British soldiers, Bolivar was able to land in Venezuela and he began a long campaign known as ‘the Admirable Campaign’ to take back Venezuela from the Spanish.

During this campaign, Bolivar displayed his talent for military prowess and strong leadership. Despite heavy rains, Bolivar led the army through muddy fields and rivers and across the Andes to Bogota. It was a perilous crossing and some troops died from exposure. But, because it was so difficult to cross, the Spanish never expected an attack. On 7 August 1819, he overwhelmed the Spanish forces at the Battle of Boyaca and was able to triumphally enter Bogota. Bolivar achieved many similar military victories, despite being outnumbered.

“Do not compare your material forces with those of the enemy. Spirit cannot be compared with matter. You are human beings, they are beasts. You are free, they are slaves. Fight, and you shall win. For God grants victory to perseverance.” – Bolivar

When this was successfully completed, he was able to launch campaigns to gain independence for Venezuela and Ecuador. On achieving this goal Bolivar was hailed as ‘El Libertador’ – the Liberator.

In 1821, his successful military campaigns enabled him to become the president of Gran Colombia (a state covering several Latin American countries). Initially, most of the territory was in the hands of Spanish loyalists, but over the next few years, Bolivar’s army grew stronger and a revolution in Spain, reduced the capacity of the Spanish to fight for their overseas colonies.

With the help of his best commander, Antonio Jose de Sucre, he proceeded to liberate Ecuador in 1822. This left the remaining Spanish colony of Peru. The Argentine revolutionary San Martin has liberated parts of southern South America but struggled to defeat the Spanish in the northern region. He decided to allow the more ambitious Bolivar to claim northern Peru as he felt Bolivar had the best military and the political chance of beating the Spanish. In 1824, Bolivar led his army to success and by 9 December 1824, the Spanish army which had numbered 18,000 men surrendered.

The only remaining outpost was then in upper Peru, which Bolivar conquered in April 1825. This new country was named Bolivia after their liberator. It was a remarkable achievement that, from a small unpopular beginning, Bolivar had successfully led the South American countries to gain freedom from Spain.

Bolivar’s grand vision of a federation of Latin American Republics (like the United States) proved difficult to hold together.

Like Napoleon, Bolivar was torn between republican ideals and the need to maintain order. Bolivar like aspects of democracy but also feared that only a strong leader could hold together a country. When writing the Bolivian constitution, he stipulated elections (on limited suffrage) two legislative assemblies but most importantly a lifelong presidency – similar to the British constitutional idea of a hereditary monarch. Bolivar was strongly anti-slavery, but this was unpopular within the Gran Colombia because slavery was such an important part of the Venezuelan economy. Bolivar also had a strong internationalist spirit, one of his dreams was to see a Federation of Latin American countries.

“In the unity of our nations rests the glorious future of our peoples,” (1)

Bolivar felt that a union of states and solidarity would be mutually beneficial. It proved to be an idea ahead of its time, with only Colombia agreeing to ratify Bolivar’s proposals and hopes for a common army were allowed to drift.

There were frequent resentments from different regions and Bolivar was forced to take dictatorial powers to hold the country together. However, this increased the alienation of his political opponents. In 1828, he narrowly avoided an assassination attempt and Bolivar realised that he was a polarising figure and the hope of keeping countries together was not realistic.

In 1830, Bolivar resigned his presidency – turning down offers to become permanent president, preferring to remain an ordinary citizen. He planned to sail to Europe but before he could set sail, he became ill from tuberculosis. He died after a painful illness towards the end of the year.

“Colombians! My last wish is for the happiness of the patria. If my death contributes to the end of partisanship and the consolidation of the union, I shall be lowered in peace into my grave.” – Simón Bolívar

“A republican government: that is what Venezuela…should have. Its principles should be the sovereignty of the people, division of powers, civil liberty, prohibition of slavery and the abolition of monarchy and privileges. We need equality to recast, so to speak, into a single whole, the classes of men, political opinions and political custom.” – Bolivar

“When I contemplate this immense reunited country, my soul mounts to that height demanded by the colossal perspective of a picture so wonderful. My imagination takes flight toward future ages and admiringly observes from them the prosperity, the splendor, and the life which will exist within this vast territory. I am carried away; and I seem to behold it in the heart of the universe, stretching along its extensive coasts between two oceans which nature has separated; but which our fatherland has united by long and wide canals.”  – The Angostura Address (1819)

Bolivar was a charismatic leader and visionary who succeed in liberating large areas of south America. He was emotional, dramatic with a love of flattery and numerous personal foibles. When the cause seemed lost, he showed steely determination, great courage and leadership. He had an internationalist spirit, seeking a federation of American states, and yet he is often remembered as a nationalistic and militaristic figure. He loved the ideals of the American revolution, but felt democracy would not work for his own people. He had no desire for personal wealth or gain. He began life rich but ended it poor. He freed all his slaves and sought (with mixed results) to end slavery in the countries he liberated.

Marquis de Lafayette wrote on behalf of George Washington’s family that Bolivar was “The second Washington of the New World.“

Simon Bolivar was Roman Catholic. He was also a prominent freemason. When attacking Spanish churches he sometimes had their wealth stripped out. In his writings, he sometimes invoked God, but mainly talked of the political struggle.