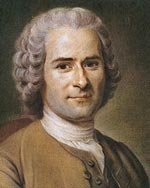 Jean Jacques Rousseau (1712-1778) was a Swiss-born French philosopher. His most influential political work was the Social Contract (1762) – which promoted the ideal of a more egalitarian republicanism. His philosophy had a direct influence on the French and American Revolution. Rousseau was an original thinker and challenged the orthodox religious and political views of the day. For his controversial criticism of established religion, his works were often banned, and he sought exile in different European countries. He was also a musician and lover of nature – because of his freedom of spirit and thought, he is considered an influential figure of the European Enlightenment and a precursor of Romanticism.

At the time, Geneva was a Calvinist city-state ruled, in theory, by democracy, but in practice by a small number of wealthy families. Growing up in Geneva, Rousseau would have been exposed to the tensions between different ideas for a model city-state. He often spoke favourably for Geneva as a model for an ideal state.

His father was a clockmaker, but when Rousseau was ten years old, his father was forced to leave the city, leaving Rousseau and his brother behind with relatives. Rousseau gained a rudimentary education before becoming an apprentice to a notary and engraver.

However, his apprenticeship was an unhappy one, and after finding the gates of Geneva closed after curfew, he left the city and wandered to nearby Savoy.

After leaving Geneva, Rousseau was fortunate to come under the guidance of Françoise-Louise de Warens, aged 29 – a Catholic noblewoman of Protestant background.

De Warens was a formidable character – cheating her husband out of money to become an evangelist for converting young Protestant men to Catholicism. She had a gregarious nature – a great entertainer, lover of music, literature and a profligate spender. For a time, De Warens and Rousseau also became lovers.

With the backing of De Warens, Rousseau became well versed in philosophy, music, mathematics and other subjects.

In 1739, Rousseau came into an inheritance and moved to Lyon, before moving to Paris in 1742.

In 1745, he met Thérèse Levasseur, a laundry maid. She became his lover, friend and later wife. Rousseau said they had five children, but all were left at an orphanage, something he later admitted to regretting.

In Paris, he became a close collaborator with Denis Diderot, and the two became leading intellectuals of the day. They published the influential magazine Encyclopaedia. Their writings were radical and anti-clerical. Rousseau’s writings stood out for its forceful and captivating style.

Rousseau was also an excellent musician; he attempted to sell a new system of numbered musical notation to the Académie des Sciences. His system was rejected, though he was offered praise for his mastery of the subject. Rousseau was also a composer, and his works were warmly received by King Louis XV.

Rousseau could probably have gained employment as a court composer for the King, but he increasingly felt the barrenness of worldly life. In particular, he was drawn to the awareness of how worldly achievements and riches could easily corrupt the better nature of man. This could have been partly due to his Calvinist upbringing, but also the visible evidence of the stark inequality in modern French society.

His friend Diderot was imprisoned for his anti-clerical writings, and this galvanised him further to consider philosophical questions. It was while walking to visit his friend in jail that he later recording having a sudden, illumining thought:

“that man is naturally good, and that it is from these institutions alone that men become wicked”

In 1750 he published A Discourse on the Sciences and the Arts. It was an essay on how civilisation could have a destructive influence on human beings. It won first prize from the Academy of Dijon and gave him growing fame as an influential philosopher.

The idea that society had taken a wrong turning was not new; perhaps his most radical idea was that man was essentially good. This idea of the inherent goodness of man was rejected by Catholicism and especially Calvinism which emphasised the sinful nature of man.

In the 1750s, the Italian opera company came to Paris. The unique Italian style stood in contrast to established French opera. The French opera was more classical in form – emphasising the importance of harmony and adherence to traditional rules. Italian opera broke with these formal rules, placing melody and the pre-eminence of the musical spirit above classical expectations.

Rousseau admired Italian opera and became its greatest exponent during the strong debate with French music traditionalists. To Rousseau, his defence of Italian opera sprang from musical taste, but also a philosophic preference for artistic expression over rules. This can be seen as an underlying feature of the later Romantic period, which prioritised artistic spirit over classical traditions. Rousseau wrote one opera Le Devin du village – which was received with acclaim. Mozart later based the text of his operetta Bastien und Bastienne on it. But, Rousseau was more concerned with his work as a moral philosopher and wrote no more operas.

At this stage, he started to fall out with his former friends at the Encyclopedista. While fellow Encyclopedistas were generally materialistic and atheistic, Rousseau was increasingly attached to his belief in the divinity of man’s soul and the universe.

In 1754, he returned to Geneva – renouncing his Catholicism and returning to his original Calvinist religion. He was welcomed back because of his literary fame. He took his lover Sophie d’Houdetot (a French noblewoman), pretending she was his nurse.

In 1761, Rousseau published a romantic novel  Julie, ou la nouvelle Héloïse. It was set in the beautiful French Alps and touched on themes of sin, temptation and redemption. Behind the novel, Rousseau wished to explore issues of personal authenticity – and the importance of rejecting false social norms. It was a publishing sensation, and it has been suggested as the best-selling book of the Eighteenth Century. Over 70 editions were in print before the end of the Century, and Rousseau became a celebrity author, receiving ecstatic reviews from readers, who became deeply invested in the characters and moral dilemmas of the book.

“Man is born free, and everywhere he is in chains. Those who think themselves the masters of others are indeed greater slaves than they.”

The Social Contract was Rousseau’s most important political work, building on his earlier Discourse on Inequality (1754), it provides a framework for classical republicanism. Rousseau attacked the social contract of Hobbes, arguing Hobbes’ view was biased towards the needs and desires of the wealthy. Rousseau proposed a more egalitarian social contract which saw all the population as free and equal members. Rousseau also suggested that, in the ideal social contract, individuals would give up their natural rights in return for civil rights decided for the best interest of the community. To Rousseau, liberty involved obedience to self-imposed laws for the best interests of society.

Emile is a treatise on the ideal education of young children and how to maintain the purity and divinity of man from the corrupting influences of society.  The Fourth book included many criticisms of formal Christianity, suggesting the ideal religion was a form of ‘natural religion’. Rousseau had a strong faith in the existence of God, but his sense of religious feeling came from a connection to nature and also man’s own conscience – the “divine voice of the soul in man,” – He saw this as greater than mental rationalism and religious dogma.

He also stated all religions are equally worthy, in that they can promote virtue if practised properly. This was highly controversial, in the religious climate of the time, and the book was banned in Paris and Geneva. Warrants were issued for his arrest.

As a result, Rousseau fled to Switzerland, but the Swiss authorities stated he was unwelcome too. Voltaire offered an invitation to Rousseau – despite many differences – Voltaire admired the courage of Rousseau in writing the anti-clerical passages of Emile.

In the end, Rousseau accepted an invitation from Frederick the Great of Prussia to reside in Motiers, Prussia. This invitation occurred, despite Rousseau’s former criticisms of Frederick.

However, after two years, local Pastors started denouncing Rousseau as the antichrist for his ‘blasphemy’. Rousseau was pelted with stones by locals, and he was forced to move back to Switzerland on a tiny island the Ile de St Pierre, but again after a short time, he was ordered to leave by the authorities. Unwelcome in Europe, he accepted the invitation of philosopher David Hume to move to England.

After two years in England, Rousseau’s relationship with Hume soured as critical articles began appearing in the British press. Facing a barrage of criticism from various sources, Rousseau became more paranoid and often feared he was subject to conspiracy theories.

In 1767, he returned to France with an assumed name, despite a warrant for his arrest being in place. Despite his false name, Rousseau was recognised and was welcomed by many in French society. He was offered support by many nobles. He moved from Lyon to Bourgeon and a farmyard near Grenoble – before moving back to Paris.

During this period, Rousseau took an interest in Botany, writing Letters on the Elements of Botany. He also began writing Confessions – his autobiographical notes which were a rebuttal of the many criticisms circulating in the press. These were finished in 1770 and contain much of our biographical information about Rousseau. They were not published until 1782, after Rousseau’s death.

In 1776, Rousseau was knocked down by a great Dane dog while walking in a Paris street. He was concussed and, after this, his health deteriorated.

Two years later he passed away after an apoplectic stroke; he was buried on the Ile des Peoplers. Sixteen years after his death, his remains were moved to the Pantheon and placed near the remains of Voltaire.

The French Revolution (1789-1799) occurred just over a decade after Rousseau’s death. His egalitarian republicanism was a guiding philosophic ideal behind the ideals of the French revolution. His ideas on the ‘general will’ were also used as an excuse by Robespierre to justify the Reign of Terror and suppression of dissent.

Rousseau’s ideas on republicanism had an indirect impact on the American Revolution. Thomas Jefferson would have been influenced by the French philosophers of Voltaire and Rousseau.

Rousseau was an influential figure in the European enlightenment. He can also be seen as a precursor the Romantic Period. He had a great love for nature, and in music, religion and philosophy Rousseau sought a liberation of old forms and ideas.