Herbert Hoover (1874 – 1964) was the 31st US president from 1928-1932 during the difficult years of the Great Depression. Faced with a collapsing economy, Hoover struggled to introduce any effective policies for reversing the Great Depression and he lost the 1932 election in a landslide to Franklin Delano Roosevelt. Before the Great Depression, Hoover had cultivated a reputation for being a very successful administrator and humanitarian; he was efficient and effective in distributing aid to European countries during and after the First World War. In the 1920s, he was one of the most active ministers in Calvin Coolidge’s government. However, his reputation as a great humanitarian was forever changed by the huge economic and social costs of the Great Depression, which rightly or wrongly were associated with Hoover’s presidency.

Hoover was born to Quaker parents in a rural part of West Branch, Iowa. Aged nine, he was orphaned and he moved to Oregon to be bro ught up by an uncle. He was brought up with Quaker values of thrift, concern for poor, industry and hard-work. He graduated from Stanford University in 1895 with a degree in geology. His first job was working in a mine in California for 10 hours a day at 20 cents an hour. However, Hoover was very ambitious and using his degree and hard-work, he soon graduated to supervising mining projects and his skill was rewarded with gaining profitable contracts around the world. In 1900, he was in China at the outbreak of the Boxer Rebellion. Hoover distinguished himself by organising relief efforts for foreigners trapped in China during a time of hostility towards them.

By the outbreak of the First World War, Hoover had amassed a personal fortune of over $4 billion through his investments in mining projects. During the war, he was chosen by the American government to organise relief for Americans trapped in Europe and also relief efforts for Belgium which was under occupation by the Germans. Hoover used his forceful personality, efficiency and clarity of vision to organise substantial humanitarian aid – especially to Belgian citizens caught up in the war. Hoover was ideally suited to the task and was a powerful organiser. He was later accused of sharp practises and personally benefitting from his humanitarian efforts. Although, this was not proved he did illegally buy chemicals from the Germans because they were cheaper for his business. Hoover’s talent for organising humanitarian relief, was only matched by his capacity for self-aggrandisement. He called his own relief efforts in Belgium as

“the greatest charity the world has ever seen”

He wasted no effort in publicising the importance of his work and he was very prickly at any kind of criticism or perceived sleight. He personally wrote a letter to the editor of a local newspaper which had questioned his judgement. Also, although he was a great administrator and made a huge practical difference to those reliant on aid, he did not exude personal warmth or empathy. He avoided meeting those who were destitute, preferring to concentrate on organising at a distance. Hoover was praised for his organisational abilities but struggled to make close connections. One close associate said he could not remember Hoover ever laughing in 30 years of knowing him.

“Hoover was hardworking, incorruptible, self-assured and self-reliant. But he was also aloof, shy, wary of crowds, awkward at superficial social relations, and extremely sensitive to criticism.” William A. DeGregorio, The Complete Book of U.S. Presidents (1984)

However, these criticisms aside, Hoover became a well-known figure in America and a real American hero – a humanitarian giant who displayed America’s generosity (and growing economic power). When America entered the First World War, Presiden Woodrow Wilson appointed him to return to America and oversee domestic US food production. Hoover launched into the project with customary gusto and launched successful campaigns for Americans to have ‘wheat free’ and ‘meat-free’ days – so that troops abroad could be fed better.

With another great success in organisation, Hoover was the natural candidate to lead American relief efforts at the end of the First World War. After years of naval blockades, food was in very short-supply, especially in defeated countries like Germany and Austria. Hoover led the American Relief Administration in supplying food to millions of people. When Soviet Russia experienced the great famine of 1921-23, he also organised food supplies to Russia. It was a controversial decision as many Americans saw Communist Russia as an ideological enemy (including Hoover), but Hoover countered that with humanitarian aid, the important thing was feeding people and not politics. He said:

“Twenty million people are starving. Whatever their politics, they shall be fed.”

In 1921, Republican President Harding appointed Hoover to be Secretary of Commerce. Hoover proved one of the most dynamic and progressive members of the Republican administration. At the time, the Republican orthodoxy was one of minimal government intervention and allowing markets to function without interference. However, as a natural organiser and administrator, Hoover turned his attention to new business, such as radio broadcasting and aviation. Hoover was responsible for the first pilot licenses and an attempt to improve the safety of air travel. Hoover also helped to start projects such as the Hoover Dam and first interstate roads. He took it upon himself to try and solve traffic congestion, labour disputes, child safety measures and the price of rubber. His ambition greatly expanded the purview of the Chamber of Commerce.

In 1925, President Calvin Coolidge was elected and he kept Hoover in his position. Coolidge was even more of a laissez-faire president taking a back seat in government, working only 4.5 hours a day and spending many hours napping in the White House. In the vacuum of decision making by the president, Hoover became the de facto one of the most powerful people in America. In 1927, the Mississipi basin suffered a very severe flood with millions left homeless. Hoover was the natural candidate to take on the relief efforts. He organised temporary accommodation and food supplies to those in distress.

When Coolidge decided not to stand in 1928, Hoover was a natural candidate for the Republican Party, though he was considered quite progressive by the conservative standards of laissez-faire – typical of the Republican Party. On receiving the nomination and the sentiment ‘he had earned the right to be president,’ he replied.

“My country owes me nothing. It gave me, as it gives every boy and girl, a chance. It gave me schooling, independence of action, opportunity for service and honor.” – 1928 Republican Party Conference.

Despite his progressive politics, he was still relatively conservative and also was a keen supporter of prohibition – despite evidence it had led to a growth in organised crime. But, given the prosperity of the past eight years, voters were keen to elect another Republican and in the 1928 Presidential election, he won 21 million votes to rival candidates 15 million. The electoral college was an even bigger majority, with 444 electoral votes to 87.

As President. Hoover attempted some progressive changes. As a Quaker he was concerned with prison reform and sought to improve educational opportunities and conditions for prisoners. He also had a long-standing desire to pursue military disarmament. Hoover was a strong voice for international disarmament at the 1930 London Naval Conference.

“Older men declare war. But it is youth that must fight and die. And it is youth who must inherit the tribulation, the sorrow and the triumphs that are the aftermath of war.”

However, the mood of the Great Depression made his efforts come to nought – with the Japanese invasion of Manchuria in 1931, starting a decade of nationalist expansion.

In the 1920s, Hoover had actually warned about the dangers of the booming stock market. He was concerned about the practice of ‘buying shares on the margin’ and was concerned the bubble would burst. When the Stock Market fell in 1929, he was somewhat aware of the danger this posed to the economy and sought to reassure the public everything would be fine. As the situation deteriorated he sought to introduce policies which would offer some relief. He launched infrastructure projects, government-supplied capital, loans for agriculture and a government-backed mortgage scheme. However, although he worked very hard and had good ideas, the efforts were completely inadequate for the scale of the depression. Although he was a great supporter of capitalism, he was quoted as saying

“The only trouble with capitalism is capitalists; they’re too damned greedy.”

Despite his willingness to innovate, he still clung to orthodox policies such as requiring the government budget to be balanced. He also refused to give direct income payments to the unemployed, fearing it would create ‘welfare dependency’.

“Economic depression can not be cured by legislative action or executive pronouncement. Economic wounds must be healed by the action of the cells of the economic body–the producers and consumers themselves… The best contribution of government lies in encouragement of this voluntary cooperation in the community.” Herbert Hoover, State of the Union Address 2 Dec 1930.

In 1932, 500 medium-sized banks went bankrupt and the money supply fell drastically. In these circumstances, Hoover’s policies amounted to little more than tinkering at the edges. He also made another critical mistake with signing the protectionist “Smoot-Hawley Tariff Act in 1930. It raised tariffs on many imports and had political supporters in the US. But, it was criticised by economists for its likely effect on reducing international trade by even more. 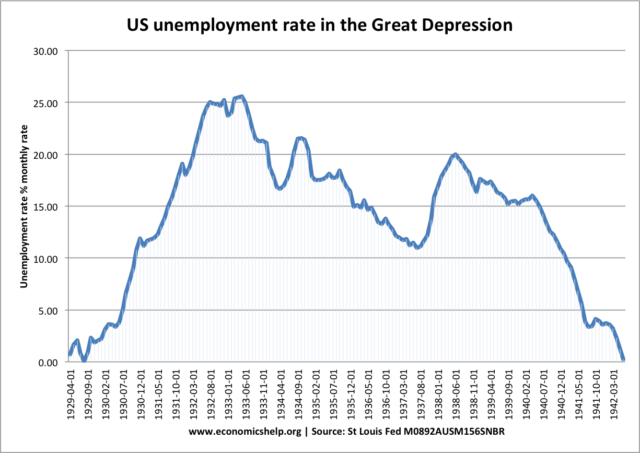 With unemployment of 25% and three years of depression, Hoover became associated with the failings of the US economy. Camps of homeless and unemployed men on the edges of cities became known as ‘Hoovervilles’. In 1932, he authorised General Douglas MacArthur to evict former soldiers in a camp near Washington who were campaigning for a war pension. The army response and brutality towards its former impoverished soldiers reflected very badly on Hoover.

The 1932 election saw Hoover roundly defeated by Democratic candidate Franklin D. Roosevelt. He lost the popular vote by 23 million to 16 million and lost all electoral votes except a few states in the northeast.

After his election defeat, he was deeply embittered claiming the media had launched an unfair smear campaign against him and that the Great Depression wasn’t his fault.

“In the larger view the major forces of the depression now lie outside of the United States, and our recuperation has been retarded by the unwarranted degree of fear and apprehension created by these outside forces.” erbert Hoover, 1874-1964: Chronology – Documents

After Roosevelt’s election victory, his New Deal seemed to breathe new life into the American economy, causing a strong recovery, making Hoover’s record neatly fit the worst periods of the Depression. Hoover became very conservative, criticising the expansion of the New Deal and interventionist approach of Roosevelt. He re-sought the Republican candidacy in 1936 and 1940 but was rebuffed on both occasions. On foreign affairs, he became a vocal critic of any US involvement in Europe. Although he criticised Hitler’s treatment of the Jews, he strongly opposed the US entry into the Second World War (until after Pearl Harbour) and was later critical of America’s involvement in Korea and Vietnam. Languishing on the fringes of American politics, he was partly rehabilitated under Presidents Truman and Eisenhower. He produced reports on the US involvement in Germany and he was appointed head of the Hoover commission into streamlining Federal bureaucracy. Hoover was the sole-living ex-president from 1933 to 1953.

He was offered positions by President John F.Kennedy but turned them down. However, he supported Kennedy after the Bay of Pigs Fiasco and was distraught at JFK’s assassination in 1963.

Herbert Hoover in the White House: The Ordeal of the Presidency

Herbert Hoover in the White House: The Ordeal of the Presidency at Amazon