John F. Kennedy was America’s second youngest elected president. He oversaw one of the most crucial moments in the Cold War (Cuban Missile Crisis) and sought to affirm America’s beliefs in basic human rights by calling for civil rights legislation and an attempt to reduce poverty. Kennedy was assassinated on November 22, 1963 – a tragic death that shocked America and the world.

John graduated from Harvard after completing a thesis on “Appeasement in Munich.” His thesis was later converted into a successful book: Why England Slept (1940). 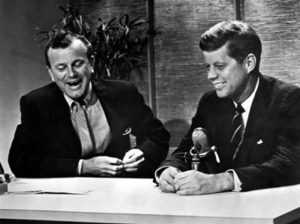 Before America joined the war, John joined the Navy and saw action throughout the Pacific theatre. In August 1943, his boat was rammed by Japanese destroyer Amagiri. John F Kennedy was later decorated for his outstanding bravery in rescuing a fellow crewman; he was also awarded the Purple Heart for an incident later in the war. Afterwards, Kennedy was modest about his actions, saying he felt a bit embarrassed as it resulted from a botched military action.

In 1946, he won a seat in Boston for the US House of Representatives, and in 1952 got himself elected to the US Senate, defeating the incumbent Republican. 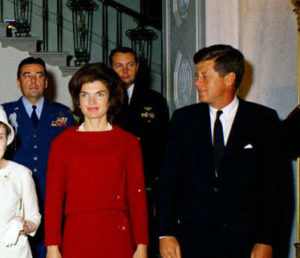 In 1953, he married Jacqueline Lee Bouvier. In 1957 he was awarded the Pulitzer Prize for biography for his book Profiles in Courage, a book about US Senators who stood up for their personal beliefs.

In 1956, he was nearly chosen to be the Vice Presidential candidate for Adlai Stevenson. The national exposure raised his profile, and in 1960 he was selected to be the Democratic nomination for the Presidency.

In 1960, in a very tight election, John F. Kennedy narrowly defeated the much-fancied Republican, Richard Nixon. It was a memorable election with many millions glued to the TV in the pre-election hustings. John F. Kennedy came across very well on TV and looked more relaxed and professional on camera. 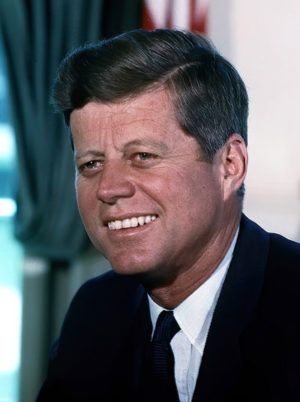 It was the first time a Roman Catholic had been elected president and it was a big issue in America where many Protestants distrusted the prospect of America being influenced by the Vatican. He had to assure voters he was not a Catholic candidate for the Presidency, but someone standing for President who happened to be a Catholic.

During his inauguration, JFK gave a memorable speech, where he famously encouraged citizens to help the nation become strong again.

He also called for greater internationalism.

“We will make clear that America’s enduring concern is for both peace and freedom; that we are anxious to live in harmony with the Russian people; that we seek no conquests, no satellites, no riches; that we seek only the day when nation shall not lift up sword against nation, neither shall they learn war any more.”

One of his early acts was to establish the Peace Corps – a volunteer programme run by the US government, it allowed young Americans to travel abroad and serve in developing countries. Kennedy hoped it would change foreign perceptions of Americans and give Americans a greater sense of international solidarity.

In 1961, after pressure from the CIA, Kennedy reluctantly ordered the Bay of Pigs invasion of Cuba. It was mostly led by Cuban exiles with minimal US support. They hope to overthrow the Communist Fidel Castro. However, the invasion was a failure leading to embarrassing negotiations with Fidel Castro’s Cuba. Despite been reluctant to go along with the policy, he accepted his responsibilty for its failure.

In 1962, figures in the US Department of Defense and Joint Chief of Staff proposed ‘Operation Northwoods’ which involved the CIA planning ‘false flag’ operations to stage attacks on US targets and claim Cuba was responsible – to create an opportunity to start a war against Cuba. Kennedy rejected the proposals but his reluctance to fully commit to removing Castro led to resentment amongst some CIA officers and Cuban exiles who felt Kennedy was insufficiently committed to removing Castro.

In 1962, the world came extraordinarily close to nuclear war during the Cuban Missile Crisis. The Soviet Union moved missiles to Cuba, which was seen as very provocative (despite the US have nuclear weapons in NATO ally Turkey. Many in the American military were keen on a pre-emptive airstrike on the missile bases, but Kennedy chose a more cautious diplomatic approach.

Kennedy found a way to offer Khrushchev a way out without losing face. After several days of tense negotiation, an agreement was reached where the Soviet Union would remove missiles from Cuba in return for a US promise not to invade Cuba. The US also secretly removed weapons from Turkey to pacify the Soviets. His careful handling of the situation was widely praised. It led to the establishment of a direct Moscow-Washington hotline and for a few years, tensions between the Cold War antagonists were reduced.

During his brief presidency, John F. Kennedy oversaw an escalation of US involvement in Vietnam, which included sending 16,000 military advisers to the country. Later, Kennedy’s Secretary of Defence Robert McNamara said Kennedy considered pulling out of Vietnam in 1963 and believes that if Kennedy had survived, American involvement would have ended. Tapes showed that Kennedy’s former Vice-President, Lyndon Johnson later criticised Kennedy’s opinion that America should withdraw.

Meeting with leaders of March on Washington August 1963

Kennedy was a supporter of civil rights, but when elected in 1960, American society was deeply divided with entrenched opposition to the end of segregation and racism. Kennedy was torn between the need to retain the support of white southern democrat voters and a wish to promote civil rights. He supported voter registration drives, appointed African Americans to positions within his administration and promoted Thurgood Marshall to the Second Circuit court of Appeals in New York.

However, this was insufficient to tackle the much larger injustices. During the 1960s, the civil rights movement led by Martin Luther King became disappointed with JFK’s apparent non-committal stance, instead, they took non-violent direct action to highlight the injustice of segregation and civil rights leaders. This often led to shocking images – shown on tv, of police brutality against civil rights activists.  A turning point was 3 May 1963, where police in Birmingham unleased shocking brutality on protestors. This galvanised Kennedy to take more direct action sending federal marshals to the south in order to prevent racial violence getting out of hand. On 11 June 1963, Kennedy made a televised address to the nation where he spoke clearly in favour of the need to pass civil rights legislation

“The heart of the question is — whether all Americans are to be afforded equal rights and equal opportunities. Whether we are going to treat our fellow Americans as we want to be treated… One hundred years of delay have passed since President Lincoln freed the slaves, yet their heirs, their grandsons, are not fully free….” – J.F. Kennedy

Although he did not live to see his promise enacted, it was a turning point in his presidency with a clear commitment made. The Civil Rights Act of 1964 outlawed racial segregation. 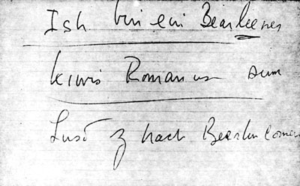 In June 1963, Kennedy made a memorable speech in West Berlin to a crowd of up to 450,000. He criticised the Soviets for their divisive wall and stated:

“Freedom has many difficulties and democracy is not perfect, but we have never had to put a wall up to keep our people in… All free men, wherever they may live, are citizens of Berlin, and therefore, as a free man, I take pride in the words “Ich bin ein Berliner!”

His speech was very well received by people living in West Berlin, who felt surrounded by the Berlin Wall and Communist East Germany. The Soviet authorities were less enamoured of his speech which they felt was confrontational.

John F. Kennedy was assassinated in November 1963. Lee Harvey Oswald was arrested and put on trial for his murder. However, before he could reach trial, Lee Harvey Oswald was himself killed by Jack Ruby. Lee Harvey Oswald always pleaded his innocence and many believe the assassination was a wider conspiracy. His death left a large void in American politics that was never adequately filled. Though Johnson did enact civil rights legislation and a form of welfare state, which many see as something Kennedy was keen to do. His brother Robert F. Kennedy was assassinated in 1968 whilst seeking the democratic presidential nomination.

The Kennedy Half-Century at Amazon

“War will exist until that distant day when the conscientious objector enjoys the same reputation and prestige that the warrior does today.”

“Let every nation know, whether it wishes us well or ill, that we shall pay any price, bear any burden, meet any hardship, support any friend, oppose any foe to assure the survival and the success of liberty.”

Famous leaders – A list of famous leaders who led their country. Including Lenin, Churchill, Napoleon, and F.D Roosevelt.

People of the Cold War (1948 to 1990) – Famous people who participated in the Cold War between the Soviet bloc and the US/NATO allies.