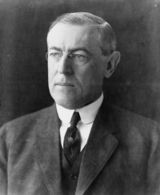 Woodrow Wilson was 28th President of the US serving from 1913 to 1921. He is best remembered for his role in the First World War – keeping the US out of the war, until reluctantly entering in 1917. At the end of the war, Woodrow Wilson formulated his 14 points, which sought to create an international League of Nations and institute principles of self-determination and justice as the basis for the armistice.

He was awarded the Nobel Peace Prize in 1919.

Woodrow Wilson was also a progressive with attempts to control big business and end elitism in universities.

He was born on 28 December 1856 in Staunton, Virginia. His father identified with the Confederacy and defended slavery. However, Woodrow Wilson did not share his father’s views on this, later writing.

“Because I love the South, I rejoice in the failure of the Confederacy.” (March 1880).

In 1885, he married Ellen Louise Axon and together they had three daughters. Wilson studied at John Hopkins University and gained a PhD in history and political science. He went on to have a distinguished academic career becoming the principal of Princeton.

He felt the University of Princeton was underachieving – being held back by elitism and laid back standards. This led to a standoff with the university establishment – with Wilson trying to tackle the elitist traditions of Princeton. This proved to be a bruising encounter and was a key factor in encouraging Wilson to turn to politics. He ran for governor of New Jersey, in 1910, as a progressive candidate and he was nominated as the Democratic candidate at the 1912 Democratic convention. Winning the Presidency, Wilson embarked on a series of progressive legislation. This included:

Wilson argued no country can afford to have its prosperity originated by a small controlling class.

Despite progressive social and economic policies, he expanded a policy of segregation and disappointed many African Americans who switched allegiance to the Democrat party and voted for Wilson on promises of equal rights. Wilson said on segregation:

“segregation is not a humiliation but a benefit, and ought to be so regarded by you gentlemen.”

In 1916, he narrowly won re-election campaigning on an anti-war stance.

However, after 1916, public opinion hardened against Germany. Germany’s unrestricted submarine warfare, such as the sinking of the Lusitania, led to serious American casualties. Then in January 1917, the publication of the Zimmerman Telegram suggested Germany was willing to help Mexico regain territory in Southern US. By April 1917, Wilson had overcome his deep reluctance to go to war and asked Congress to declare war on the government of Germany. Congress overwhelmingly supported the decision.

At the end of the war, Woodrow Wilson presented his fourteen points to the Allies as a basis for a just armistice. The fourteen points included the general principle of self-determination.

“Do you never stop to reflect just what it is that America stands for? If she stands for one thing more than another, it is for the sovereignty of self-governing peoples.”

“All the peoples of the world are in effect partners in this interest, and for our own part we see very clearly that unless justice be done to others it will not be done to us.”

However, the victorious Allies, who had suffered much greater financial and human loss were in less mood to be magnanimous. France, and to a lesser extent Great Britain, wanted to impose reparations and a harsh peace treaty on Germany. There was also a reluctance to accept the principle of self-determination because of their Empires and colonies.

The British PM said of Woodrow Wilson and his French counterpart at the Treaty of Versailles.

“I was seated between Jesus Christ and Napoleon.”

Back in the US, a Republican controlled Congress also rejected Wilsons’ 14 points. Republicans wanted the US to remain isolated from the problems of Europe and didn’t want to be part of the League of Nations.

“I can predict with absolute certainty that within another generation there will be another world war if the nations of the world do not concert the method by which to prevent it.”

Wilson began a campaign to support his peace plan, but he collapsed after a bout of influenza and spent the next three years of his life as an invalid until his death in 1924.

Woodrow Wilson was a founder member of the Presbyterian church in the US and was deeply religious. He cycled regularly and was a very keen golfer.