Franklin Delano Roosevelt (January 30, 1882 – April 12, 1945), often referred to by his initials FDR, was the thirty-second President of the United States. He served through the Great Depression and the Second World War.

“The only thing we have to fear is fear itself.”

FDR was elected during the height of the Great Depression in 1932 and remained President until his death in 1945. During his presidency, he oversaw an expansion of the Federal Government and helped America lose its isolationist stance as it took a leading role in the defeat of the axis powers – Japan and Germany during World War Two. As the war came to a conclusion, he helped to lay the foundations for the United Nations. Roosevelt was a very influential figure in both American and world politics.

Roosevelt was born on 30 January 1882, in Hyde Park, New York, to a wealthy family. He was brought up with a privileged background but was influenced by his headmaster at Groton School in Massachusetts, who inculcated the importance of Christian duty in helping less fortunate people. After school, he went to Harvard where he studied economics. He was an unremarkable student but became editor of the Harvard Crimson which suited his capacity to manage other people.

In 1905, Franklin married a distant cousin Eleanor. They had six children in quick succession, two of them who went on to be elected to the House of Representatives. FDR has several affairs outside of his marriage including Lucy Mercer, his social secretary.  His wife Eleanor offered a divorce at one point, but for a variety of reasons, it was not taken up. She later became a dedicated wife/nurse during Franklin’s slow disability brought on by polio.

In 1929, FDR was elected governor of New York and this proved a springboard to launch his bid for Democrat nomination for 1932. With America facing an unprecedented economic crisis with unemployment reaching 25%, Roosevelt was able to win a landslide – offering hope to those made destitute by the Great Depression. 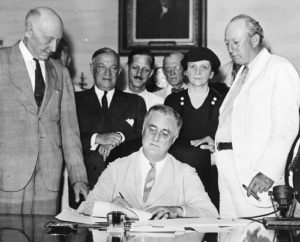 To some extent, FDR pursued an expansionary fiscal policy as advocated by John M Keynes. The government borrowed, levied a national income tax and spent money on public works (known as the New Deal). This period also marked a shift in power from local governments who could not cope to the national government. Roosevelt also helped introduce legislation protecting worker’s rights. The New Deal did not solve the economic crisis, but it did mitigate some of the worst effects, creating employment and eventually kick-starting the economy. By the end of the 1930s, some sectors of the economy such as construction were booming. The recovery was enough to help Roosevelt win re-election in 1936. In 1940 with Nazi Germany sweeping through Europe, Roosevelt decided to break with convention and become the first president to run for a third term. He won the 1940 election in another landslide.

FDR was keen for America to become a good citizen of the world and fight for certain freedoms. However, in the early 1940s, America still retained a very strong isolationist approach and, in 1940, he campaigned for re-election promising to stay out of World War Two – despite his own dislike of Nazi Germany. However, in 1941 as Britain’s situation deteriorated, FDR did skillfully negotiate a generous lend-lease programme which helped Great Britain financially, when it stood alone against Hitler. Roosevelt used the analogy of lending a neighbour a hosepipe when their houses were burning down. His skill helped pass the bill through a reluctant Congress.

The bombing of Pearl Harbour in December 1941, completely changed the outlook of America. F.D.R wasted no time in declaring war on Japan and then Germany as well.

Once America had entered the war, they entered whole-heartedly into both arenas – the Pacific and Europe. In the D-Day landings of 1941, America supplied roughly 2/3 of the troops. Roosevelt was an astute Commander in Chief. In particular, he was able to identify generals with genuine talent and promoted them to key roles. As Roosevelt said himself:

“I’m not the smartest fellow in the world, but I can sure pick smart colleagues.”

In particular, FDR promoted Dwight Eisenhower and George Marshall – both to play key roles during the Second World War.

Roosevelt’s real political skill lay in his powers of communication and identification with ordinary people. His radio fireside chats were instrumental in building confidence with the American people, both during the Great Depression and during the Second World War.

“This great Nation will endure as it has endured, will revive and will prosper. So, first of all, let me assert my firm belief that the only thing we have to fear is fear itself — nameless, unreasoning, unjustified terror which paralyzes needed efforts to convert retreat into advance.” – 1933

Roosevelt had a close relationship with Winston Churchill. There was a strong mutual admiration. At one point Roosevelt said ‘It is fun being in the same decade as you.’

Together with Churchill and Stalin, the Big Three helped lay the foundations for the post-war period, which included the setting up of the United Nations – a successor to the League of Nations.

Roosevelt died unexpectedly from a massive brain haemorrhage in April 1945, just before the first meeting of the United Nations. His death stunned the world and he was remembered as a champion of freedom and a man of humanity and optimism.

Many scholars rate Roosevelt as the greatest US President of all time (or at least in the top 3). He navigated the US through one of the most difficult challenges in world history. Strengthening US democracy at a time when many countries embraced fascism. He also laid the foundation of Federal support for the unemployed and the beginnings of a social safety net, which helped keep the country together during a time of economic catastrophe. Roosevelt also was also highly instrumental in leading the US war effort against Japan and Germany. He was a skilled diplomat and successfully worked with Churchill and Stalin in one of the most important alliances in military history. When Roosevelt took office in 1932, the US was in a deep depression and isolated on the world stage. When he died in 1945, the US had emerged as the world’s dominant economic and political superpower. , and as the US emerged as the domininant military force, he was the most powerful voice of the Allies.

Famous leaders – A list of famous leaders who led their country. Including Lenin, Churchill, Napoleon, and F.D Roosevelt.

Theodore Roosevelt (1858 – 1919) President (1901-09) Roosevelt was a leading political figure of the Progressive Era – fighting corruption and the power of monopoly trusts. As President, he challenged corruption and monopoly power. He also created the first American Natural Parks and pursued a more activist US foreign policy, building up the navy

Abraham Lincoln (1809-1865) 16th President of the US from 1861-1865. He led the Union forces during the American civil war. Lincoln led the north to victory preserving the Union and passing a bill to abolish legal slavery.