These are ten events from the twentieth and twenty-first century that changed the world in a very significant way. It includes the sparks which started major wars and revolutions – affecting the lives of millions of people across the globe.

Major events that changed the world

The assassination of Archduke F. Ferdinand and Outbreak of World War I – June 28, 1914

In 1914, Europe was a tinderbox of tension and military rivalry. The spark for war could have been many incidents; but, as it happened the assassination of an Austrian Archduke – Franz Ferdinand by a Serb provoked widespread declarations of war and the fulfilment of treaties which led to the horrendous conflict of the First World War. 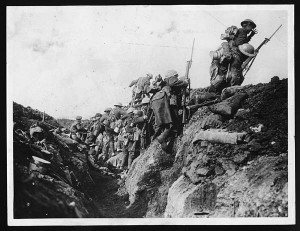 The war was to last four years and cost the lives of millions of men and women from all corners of the world. The First World War also led to profound social change. After the First World War, there was increased recognition for the role of women in society, with many countries giving women the vote. There was also greater emphasis placed on the role of the working class, who had fought and died in the war, and now wanted a better peace. In 1918/19 there was global flu pandemic which killed nearly 50 million people (many young adults) but such was the carnage of the First World War, it had only a limited effect on changing the world as many governments downplayed its impact. 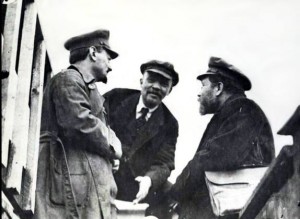 Since the publication of Marx’s Communist Manifesto, there had been sporadic Communist revolutions in European countries, but nothing had really succeeded. But in October 1917, the Bolshevik revolution, led by Lenin, brought about a radical new form of government with worldwide implications. Lenin was a fervent Marxist and wasted little time in implementing his version of a ‘dictatorship of the Proletariat’. Communist Russia divided the world. It was seen by some as an alternative to the inequities of Capitalism and by others as an embodiment of totalitarianism and lack of freedom. The Soviet Union transformed the lives of Russian people – it led to economic growth, but also increased political repression. The ideology of the Soviet Union also led to a prolonged ‘Cold War’ – with an ideological divide between western democracy and Soviet Communism. 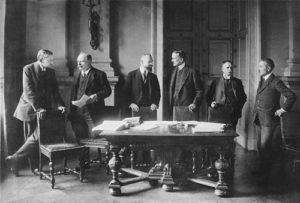 After the First World War, American President Woodrow Wilson promoted an idealistic 14 points and creation of a new “League of Nations” to help prevent war. However, the American Senate voted against joining the League of Nations and France and Britain sought ‘reparations’ from Germany and the defeated powers. Germany was occupied by French troops until the mid 1920s and the German army severely limited. These restrictions were considered ‘humiliating’ by many German army officers and this sense of ‘betrayal’ would be exploited by Hitler in the coming years. French general Ferdinand Foch stated. “This is not peace. It is an armistice for twenty years.” The Treaty of Versailles and other similar treaties arbitrarily re-drew the map of the world – creating new countries, such as Czechoslovakia, Finland, Poland, Latvia, and Yugoslavia out of ethnically mixed populations, which would prove problematic many years later.

Just 20 years later, Hitler would plunge the continent into conflict for a second time in an effort to restore lost pride.

In October 1929, after the long economic and stock market boom of the 1920s, in October 1929, shares on Wall Street dropped sharply. This led to a prolonged fall in share [roce and precipitated the global great depression. Unemployment rose to 25% in US with output and trade falling around the world. The widespread poverty and sense of alienation led to the growth of political extremes across the world. Japan and Germany both turned to far-right nationalist movements, which led to military expansionism and the Second World War. In America, the Great Depression led to the election of FDR and a great expansion in the size of the Federal government as people wanted the government to intervene in dealing with the depression. 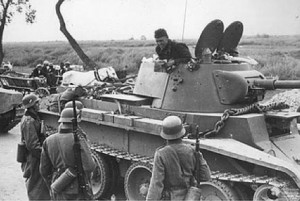 On 1st September 1939, Hitler’s Nazi Germany invaded Poland, ostensibly for ‘lebensraum’ and to redress the imbalances of the Treaty of Versailles. The invasion of a sovereign nation finally convinced the allies – Great Britain and France of Hitler’s wider intentions for the occupation of Europe. After appeasing Hitler over Austria and Czechoslovakia, Poland proved the final straw and on September 3rd, 1939, Great Britain declared war on Nazi Germany. The Second World War was to last until May 1945, costing the lives of approximately 50 million people. Less well known is that under a secret Nazi-Soviet pact the Soviet Union also occupied parts of Poland at the same time as Germany’s invasion.

In 1941, Hitler’s German army seemed unstoppable having conquered all of western Europe. A key moment in world history was in May 1940, when there was a debate in the British government whether to seek a deal with Hitler or continue to fight. Winston Churchill was adamant Britain should never surrender and refused to consider signing a deal. From June 1940, the German airforce attacked British airbases as a prelude to invasion. Although the number of combatants was small, the German airforce suffered sufficient losses to discourage the invasion plan and Hitler withdrew from imminent invasion. 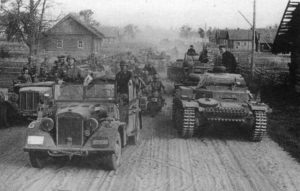 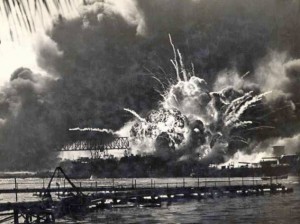 “A day that will live in infamy” – President Franklin D. Roosevelt

In 1941, the axis powers held a supremacy over Europe and parts of Asia. Great Britain stood undefeated, but, without the strength to win against an overpowering enemy. The bombing of Pearl Harbour led to the escalation of the world war into the Pacific arena and also brought American into war with both Japan and Germany. Three years later, it was American troops who provided the majority of the manpower in the liberation of occupied Europe. 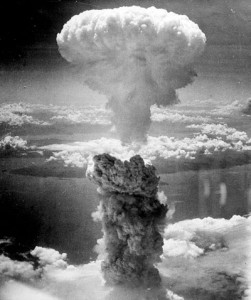 The US atomic bombs of 1945, devastated the cities of Hiroshima and Nagasaki. The devastation finally brought the Japanese to surrender, bringing to an end a fierce and costly Pacific war. The surrender of Japan had at one time seen unthinkable. But, the atomic bomb hastened the Japanese surrender. The atomic bomb had implications beyond just the end of the Second World War. It showed the world the potential devastation a third world war could cause. Even now the legacy of Hiroshima and the threat of nuclear war hangs over the world. 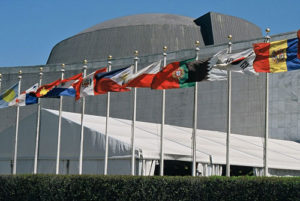 On 24 October 1945, the United Nations officially began. Its aim was to prevent war and co-ordinate humanitarian efforts to reduce poverty, uphold international law and protect the environment. Although the UN has often lacked the power to stop aggression, it is still an important international forum with the charter of the United Nations upholding basic universal rights and freedoms without distinction or discrimination. It also established the first international Court of Justice at the Hague. The UN has played a role in global humanitarian efforts and UN bodies such as the Global smallpox eradication programme.

India had stood as the crowning jewel in the crown of the British Empire. It was the second-most populous nation in the world. After many years denying Indian calls for independence, Britain finally agreed to full Indian independence in 1947. Indian independence was accompanied by a painful separation and the birth of a new nation – Pakistan. The separation led to painful incidences of sectarian violence and killing; it led to the migration of many millions of people who found themselves on the wrong side of the border. The independence of India also created a newly independent nation which claimed allegiance to neither the US or the Soviet Union – but a third way as Nehru called it. With economic development, India has the potential to become a new superpower in the coming century.

The Establishment of Maoist China 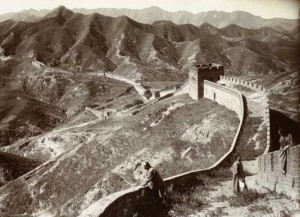 In the aftermath of the Second World War, China was involved in a bitter civil war between the Communists led by Mao Tse Tung, and the Nationalists by Chiang Kai-shek. On October 1st, 1949, the triumphant Communist Party established the People’s Republic of China. This created another powerful Communist State in the most populated country in the world. The Communist hold on power profoundly influenced the lives of the Chinese who suffered under the great famine of the 1960s and Cultural Revolution of the 60s and 70s. Even now, the Chinese Communist Party retains strong political power – even if it has adapted its economic policies. 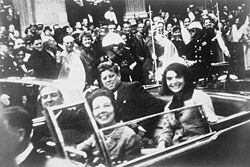 One of the most shocking and unexpected moments of world history. John F Kennedy had been President since his election in 1960. He was young, liberal and Catholic and had inspired many with his positive vision of the world.

After his assassination, Lyndon Johnson became President and American involvement in Vietnam grew, leading to a bitter conflict that came to divide America. Although Lee Harvey Oswald was arrested for the assassination, evidence points to a wider conspiracy and the involvement of more than one lone gunmen.

Fall of the Berlin Wall 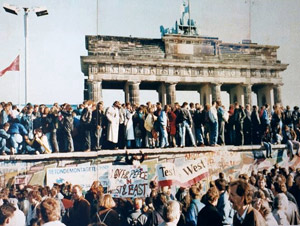 For decades, the Berlin wall had stood as a symbol of the ‘Iron Curtain’ splitting West and Eastern Europe. On the one side Communist authoritarian states, on the other side liberal democracies. The wall had been built to prevent East Germans escaping into West Germany, and indeed many had been shot trying to escape. But, more than anything else its presence was symbolic. The fall of the Berlin wall was an iconic moment when the Soviet Union gave up its grip on Eastern Europe. In the 50s and 60s, the Soviet Union had sent tanks to quell independence movements in Hungary and then Czechoslovakia. But, this time, Mikhail Gorbachev, the proponent of Perestroika and Glasnost approved the request for freedom.

The US had experienced sporadic terrorist attacks before. But, the sheer audacity and scale of these terrorist attacks shocked the US and the world. The loss of life was estimated at just under 3,000. The event changed American foreign policy. It was a motivating factor behind the controversial invasion of Iraq and led to a ‘war on terror’ symbolised by Guantanamo Bay and a debate over the justification of torture.

In late 2019/early 2020, China experienced an outbreak of a new virus, Covid-19. The virus had a fatality rate of between 1-4% but spread with alarming speed. In March 2020 Italy became the first country in the western world to implement a lockdown to try and stop the rapid escalation of the virus. There soon followed widespread global ‘lockdowns’ with people confined to their homes and business shut down.

Despite travel bans, the virus spread to all countries around the world. This lockdown had a profound adverse effect on the global economy with a sharp rise in unemployment and a fall in output. It also challenged long-held view of invulnerability amongst western developed countries. The long-term impact of the pandemic is uncertain, but it will lead to structural changes in the economy and the balance of the world. China is both seen as the source of the virus, but also – as the world’s dominant manufacturer – is a key player in the efforts to manufacture equipment to deal with the crisis.

Other major events which changed the world

Great Events in American History – A list of some of the great moments in the history of the United States, by chronological order – from the arrival of Columbus to landing a man on the moon and the end of the Cold War.