Mikhail Gorbachev was general secretary of the Soviet Union Communist Party from 1985–1991. He was also the first democratically elected President in 1990.

Mikhail Gorbachev played a key role in dismantling the Communist grip on power in both the Soviet Union and Eastern Europe. His aspirations for democracy and reform opened up the way for the end of the Cold War and the bringing down of the Berlin Wall. He was removed from Presidential office in 1991, during a failed coup attempt. Since leaving office, Gorbachev has worked tirelessly promoting new efforts at social justice and concern for the environment through his own organization, the Green Cross.

Mikhail Gorbachev was awarded the Nobel Peace Prize in October 1990 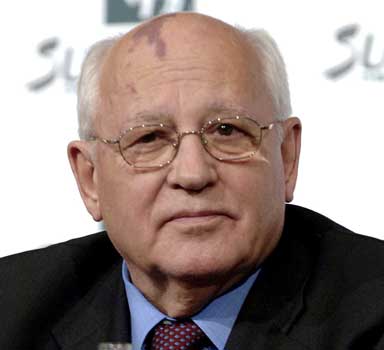 Gorbachev was born in March 1931 in Stavropol, the North Caucasus to a poor peasant family. At the age of 11, the district was occupied by the Germans for three years, a tough time for all in the village. In 1950 he enrolled at Moscow University where he became a member of the Soviet Union Communist Party. It was here that Gorbachev met his future wife, Raisa Maxima, and they married soon after meeting.
After gaining a degree in law, Gorbachev made much progress within the Communist party. Gorbachev gained a reputation for being hard-working, honest and a good loyal Communist member. Unlike his other colleagues, he was moderate in drinking and not interested in gaining financial benefits. His dynamism achieved some notable achievements and the respect of party bosses, but he also became aware of the limitations of the Communist system and how the vast bureaucracy was so difficult to change. Gorbacheve believed in socialism but he wished to see it become more efficient and better directed to improving people’s lives.

In 1980 he was the youngest Politburo member and in 1985 he was elected General Secretary of the Communist Party. The relatively youthful Gorbachev stood in marked contrast to the previous ageing and fossilised leaders of the Soviet Union. The KGB were happy to see Gorbachev elected as they felt he had the capacity to improve the Soviet Union. They were not aware of how much Gorbachev would change Communism and the Soviet Union. Later some KGB sources said their biggest mistake was Gorbachev.

A year after becoming leader, there was a massive explosion at the Chernobyl nuclear power station. The multiple failings and efforts to cover up serious safety breaches only reinforced Gorbachev’s view that the Communist system needed serious reform.

“The Chernobyl disaster, more than anything else, opened the possibility of much greater freedom of expression, to the point that the system as we knew it could no longer continue. It made absolutely clear how important it was to continue the policy of glasnost, and I must say that I started to think about time in terms of pre-Chernobyl and post-Chernobyl.”

On the international scene Gorbachev aspired to end the arms race as he said:

He built up good relations with US leader Ronald Reagan and especially with UK leader Margaret Thatcher. He surprised the world by offering to make big concessions in the abolition of nuclear weapons. He has been credited with playing a major role in ending the Cold war, in both the East and also the West. In his Nobel Address of June 1991, he offered an optimistic view of how countries might work together to build a better world.

“I am an optimist and I believe that together we shall be able now to make the right historical choice so as not to miss the great chance at the turn of centuries and millenia and make the current extremely difficult transition to a peaceful world order.” (Nobel Address)

In 1991 conservative military forces attempted a coup to overthrow Gorbachev to save the Soviet Union and Communist system. The life of Gorbachev was in serious jeopardy. The Coup eventually failed but on returning to Moscow, political power had shifted from the Politburo to modernisers such as Yeltsin. Gorbachev resigned and never made a successful return to Russian politics.

Raisa Maximova, Gorbachev’s wife died of Leukaemia in 1999. They had one daughter, Irina.

Although unpopular in Russia for his perceived role in the breakup of the Soviet Union, he remains an influential voice. Although he had previously supported Putin, In 2011 Gorbachev criticised his third term as Russian President. He was also critical of the democratic deficit in the 2011 elections. Gorbachev has also warned that in Russia. “Politics is increasingly turning into imitation democracy” – with all the power in the executive branch.

Gorbachev has also warned against a new ‘cold war’ and argued that America and the West need to be careful in interfering in Russian affairs and Russian spheres of influence. On issues of economics, he has called for a new perspective on economic issues – arguing the 2007 financial crash showed the limitations of the “Washington Consensus” – on free-market economics. Gorbachev has also founded the Green Cross International – one of the principal sponsors of the Earth Charter – a movement to encourage greater concern for the planet and environment.

“We desperately need to recognise that we are the guests, not the masters, of nature and adopt a new paradigm for development, based on the costs and benefits to all people, and bound by the limits of nature herself rather than the limits of technology and consumerism.”

Gorbachev has officially stated that he is an atheist. However, at the same time, he has been open to religious influences. He has admired the life of St Francis of Assisi, Pope John Paul II and cultivated a friendship with Indian spiritual teacher, Sri Chinmoy. Speaking of his own beliefs, he said:

“I believe in the cosmos. All of us are linked to the cosmos. Look at the sun. If there is no sun, then we cannot exist. So nature is my god. To me, nature is sacred. Trees are my temples and forests are my cathedrals.”

People who promoted world peace – People who have made a great contribution to creating a more peaceful world.