Ingrid Bergman was a Swedish actress who was highly regarded for her roles in influential films, such as Casablanca (1942), For Whom the Bell Tolls (1943) and Anastasia (1956). She is the second most decorated Hollywood actress, with three Oscars, after Katherine Hepburn. Bergman was considered to have tremendous acting talent, an angelic natural beauty and the willingness to work hard to get the best out of films. She was also a very versatile actress, fluent in five languages and appearing in a range of films, plays and TV productions.

Ingrid was born in Stockholm, Sweden on August 29, 1915. Her mother was German (of Jewish extraction) and her father Swedish. Her mother died when she was three, and her father passed away when she was 12. After this tragic loss, she went to live with her unmarried aunt who died just six months after Ingrid moved in. She was then brought up by her Uncle Otto and Aunt Hulda.

From an early age, she was interested in acting. Even with her father (a camera enthusiast), she had compiled some early motion picture videos. When she was 17, she attended the Royal Dramatic Theater School in Stockholm. She made her début on the stage but was more interested in working in films. Her first minor speaking role came in 1935 when she played a maid in a low budget Swedish film “Munkborgreven”

In the late 1930s, she made her big break into Hollywood. She had starred in a Swedish production of “Intermezzo” (1936)  the story of a violinist who has an affair with his daughter’s violin teacher. Bergman played the role of the violin teacher. The director David Selznick was so impressed with Bergman’s role that he bought the rights to have the film remade in Hollywood and chose Bergman to play the lead role. The film Intermezzo: A Love Story (1939) was a commercial and critical success, leading Selznick to sign Bergman for a seven-year deal.

In the early 1940s, she gained star status in Hollywood. In many ways she was considered the darling of Hollywood, she played many roles as the heroine of the film. Combined with her unadulterated good looks, she was quietly considered the Angel of Hollywood.

She was catapulted to global fame through her role in the 1942 film Casablanca. She played Ilsa, the wife of Victor Lazlo (played by Paul Henreid. Humphrey Bogart played Rick Blaine.) The film was produced at an important time (1942) and was made with a motivation to foster public opinion in the US against the Nazi’s. The film was a huge commercial and critical success –  and even 60 years later it is considered one of the greatest and most influential films ever produced. Bergman never considered the film to be her best role. But, she felt that the film seemed to capture something, almost mystically important. Despite a long and distinguished film career, she observed that it was Casablanca that people always wanted to talk about.

“I feel about Casablanca that it has a life of its own. There is something mystical about it. It seems to have filled a need, a need that was there before the film, a need that the film filled.”

She followed this great success with just one more film in 1943 For Whom the Bell Tolls. The book’s author, Ernest Hemingway personally chose Ingrid Bergman – stating to Ingrid – “You are Maria”. She received her first Oscar nomination for this role.

Bergman was choosing her films carefully, only doing a limited number, but each film was a great commercial success, making her one of the hottest properties in Hollywood.

“I’ve never sought success in order to get fame and money; it’s the talent and the passion that count in success.”

Other successful films followed, including Gaslight (1944) (which gave her first Academy Award for Best Actress), a nun in The Bells of St. Mary’s (1945) and also Hitchcock classics, such as Spellbound (1945) and Notorious (1946).

In 1948, she played Joan of Arc in the film “Joan of Arc” (1948). Directed by Victor Fleming, Bergman had wanted to play this role for several years and considered it her dream role. However, the film received a mixed reception, with critics not universally impressed and the box office receipts were disappointing – given Bergman’s past track record. It was one of her few films to make a loss at the time of release. Though it has since earned back its investment.

In 1937, Bergman married Swedish dentist Petter Lindstrom. They had one daughter, Pia. Lindstrom moved to New York in 1940 to be with Bergman, but he was not enamoured of the Hollywood scene. The relationship became increasingly distant with both drifting apart.

In the 1940s, Bergman wrote to the influential Italian director Roberto Rossellini praising his work and suggesting that they make a film together. In 1950, they filmed Stromboli (1950) together and she also began an affair with Rossellini, which resulted in boy – Robertino Rossellini, born in 1950. Shortly after his birth, she divorced Lindstrom and married Rossellini. She gave birth to twin daughters in 1952.

Her affair with Rossellini and divorce had a devastating impact on her carefully cultivated image and popularity. From being the angel of Hollywood, she was criticised and censored, at a time when there was a stricter morality about divorce. She was even denounced on the floor of the US Senate by Charles H.Percy who stated she was “a powerful influence for evil.” (22 years later he would enter an apology in the Congressional Record.)  Towards the end of her life Bergman would wryly remark that her public image went:

“from saint to whore and back to saint again,”

During the 1950s, Bergman featured in several of Rossellini’s films. They were quite different to her previous Hollywood box office hits. Rossellini adopted a neo-realist style – often using non-professional actors and only a minimal script. In fact, Bergman was one of the few actors that Rossellini used on several occasions.

The relationship was not always easy, and communication difficulties meant, in 1957, she divorced Rossellini; a year later she married Lars Schmidt a marriage which lasted two decades until they divorced in 1975.

Her later film career involved a variety of roles, illustrating her adaptability and flexibility. She alternated between European and American films and also featured in stage productions and some TV work.  She spoke five languages (Swedish, German, French, Italian and English) and featured in films with different languages.

In 1974, she received her third Oscar for her role in “Murder on the Orient Express” (1974). She refused the role of Princess Dragomiroff, choosing instead the much small role of Greta Ohlsson, an old Swedish missionary. It was typical of Bergman, she was careful of the roles she played and chose them for many reasons – not just which would be most successful or highly paid.

“I am an actress and I am interested in acting, not in making money.”

Her last role came in A Woman Called Golda (1982), where she played the Israeli Prime Minister Golda Meir. It was her last acting role, and she took it on, despite suffering from breast cancer. Just four months after finishing filming, she died. She received a second Emmy Award for best actress.

She later said she didn’t have regrets about her life

“I have no regrets. I wouldn’t have lived my life the way I did if I was going to worry about what people were going to say.”

Ingrid Bergman: A Life in Pictures Ingrid Bergman: A Life in Pictures at Amazon 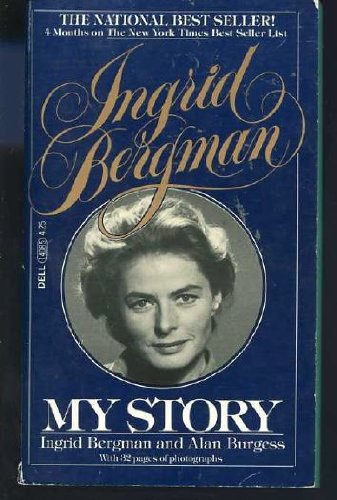 Ingrid Bergman My Story at Amazon