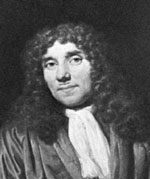 Antonie Philips van Leeuwenhoek (1632-1723) was a Dutch chemist credited with developing the science of microbiology. He was a businessman who made his own revolutionary microscopes. He then used this technological breakthrough to make innumerable discoveries of the world that can only be seen through microscopes. He discovered single-celled organisms, bacteria and revolutionised the way science looked at the living world. Entirely self-taught, he was often criticised for being an amateur with no scientific pedigree. But, he shared his findings freely with the Royal Society, and his findings were widely accepted – leading to a whole new branch of science – microbiology.

Antonie van Leeuwenhoek was born in Delft, the Dutch Republic on 24 October 1632. He was born just four days just after Johannes Vermeer – the famous artist who was also born in Delft. After a basic education, in 1648, van Leeuwenhoek became an apprentice at a draper’s shop in Amsterdam where he stayed for six years.

In 1654, he married Barbara de Mey and returned to his hometown of Delft. He borrowed 5,000 florins and bought the house and shop – Het Gouden Hoofd – here he set up his own draper’s shop and also gained a lucrative job serving the Delft sheriffs in the city hall as a camerbewaarder. He also later gained another city job – serving as the official wine-gauger for Delft’s wine imports and taxes.

His first married life was marked with tragedy, they had five children, but only one – Maria survived childhood. His wife Barbara died in 1666 – 12 years after marriage. In 1671 he remarried Cornelia Swalmius – they had no children.

In his job working in his Draper’s shop, he wished to see the cloth fibres in greater detail. He felt the existing lenses were inadequate, and so through trial and error, he sought to develop more powerful lenses. He found that by putting a hot section of soda lime glass back into the flame, he could create a very small, but very powerful lens. This was a major technological breakthrough and meant that Van Leeuwenhoek’s microscopes were more powerful than anything else in existence. However, Van Leeuwenhoek decided to keep his method secret as it enabled him to retain a monopoly on the new biology of tiny magnification. When visitors came to his rooms, he would hide his powerful lenses and pretend he made the powerful lens just by the traditional method of grinding down the lens. Throughout his life, he made over 500 optical lenses and 25 single-lens microscopes. He made so many as each object of study required its own lens. Of those lenses which have survived some could provide magnification of 275 times, which was remarkable for that particular age. His secret of lens magnification he took to his grave. It was not until 1957, that Van Leeuwenhoek’s method for fusing glass thread was recreated independently.

In his spare time, he used his microscopes to investigate many aspects of the natural world from tiny insects to blood, water and skin. Although he never considered himself a scientist – but more of a businessman, he began corresponding with the Royal Society in London. He was introduced to the Royal Society and its president Robert Hooke, by the physician Constantijn Huygens who wrote of Van Leeuwenhoek

“[he is] a modest man, unlearned both in sciences and languages, but of his own nature exceedingly curious and industrious … always modestly submitting his experiences and conceits about them to the censure and correction of the learned.”

They responded with enthusiasm at Van Leeuwenhoek’s groundbreaking discoveries and this encouraged Van Leeuwenhoek to continue further research and sending his findings to the Royal Society.

Though only an ‘amateur’ scientist, Van Leeuwenhoek worked carefully and meticulously over many years. His hard work and attention to detail enabled unprecedented discoveries – they were discoveries that did not stem from any recent trends or developments. They were truly revolutionary in a scientific sense. For example, it was Van Leeuwenhoek who was the first to discover single-celled organisms – like the amoeba. In fact, the discovery was so unexpected the Royal Society struggled to believe this discovery which overturned their previous understanding. Van Leeuwenhoek preferred to work alone and he only wrote in his local Dutch – never publishing a paper in Latin. Therefore, despite his interesting results, there was scepticism over some of his findings. To ascertain the reliability of these new findings, the Royal Society sent six observers to view van Leeuwenhoek’s work. This enabled the Royal Society to accept the new discoveries and this had ramifications for the understanding of science. Van Leeuwenhoek was elected to the Royal Society in 1680 – which proved a great surprise.

Van Leeuwenhoek was a religious man following a Calvinist Protestant Church. He saw his work on the beauty and majesty of the small as confirmation of God’s power and grace.

“Once more we see here the unconceivable Providence, perfection, and order bestowed by the Lord Creator of the Universe upon such little creatures which escape our bare eye, in order that their kind shouldn’t die out.”

He made many powerful discoveries about bacteria and cells, postulating there were many billions if not trillions with humans and water. When his seemingly ‘far-fetched’ claims were disputed, he defended his position based on his careful observations. He was aware of the work of Galileo and how the idea that the earth revolved around the sun was treated with disbelief for a long time.

“Whereas I suffer many contradictions, and oft-times hear it said that I do but tell fairy-tales about the little animals, and that there are people in France who do not scruple to say that those are not living creatures which I exhibit, … I make bold to say, that people who say such things have not yet advanced so far as to be able to carry out good observations.” – Van Leeuwenhoek letter to Robert Hooke November 12, 1680

Van Leeuwenhoek’s discoveries of microorganisms convinced him that the current theory of spontaneous generation of lower life forms was wrong. Van Leeuwenhoek was able to show that fleas were created by reproduction – just like larger organisms. Van Leeuwenhoek claimed he was motivated by a desire for knowledge. In a letter of June 12, 1716, he wrote

“My work, which I’ve done for a long time, was not pursued in order to gain the praise I now enjoy, but chiefly from a craving after knowledge, which I notice resides in me more than in most other men.”

Though an ‘amateur scientist’ his experiments and observations were based on the scientific principles of observation, repeatable experiments and sharing of findings with peers for their criticism. In many ways, Van Leeuwenhoek was ahead of his time. It would take two centuries for his initial findings on bacteria and protozoa to find its way into germ-theory – through the works of Louis Pasteur, Joseph Lister, and Robert Koch.

But, the importance of Van Leeuwenhoek’s work was opening up this world of microbiology with all its new potentials for understanding the world. Some of his major discoveries and observations included:

Van Leeuwenhoek lived for 90 years, which was rare for the seventeenth century. During his later years, he was visited by many prominent people of the age, including Peter the Great and the Queen of England. He played a key role in the development of modern science. A figure of both the late Scientific Renaissance and the modern Age of Enlightenment.