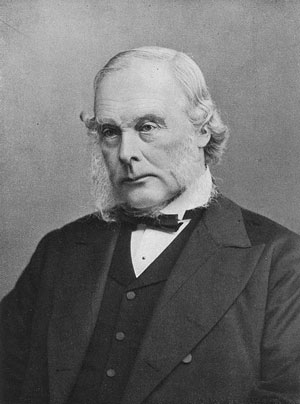 Joseph Lister was a surgeon who introduced principles of cleanliness and antiseptic routines, which drastically helped to improve survival rates from surgery. Overcoming opposition from within the medical profession, Lister successfully advocated and popularised the preventative methods until it became standard practise. Lister’s work increased the safety of major operations and enabled a greater ranger of surgery to be taken place. He is often referred to as the ‘father of modern surgery.’

Lister was born in Essex to a wealthy Quaker family. Brought up a Quaker, his education had a greater focus on the natural sciences than a classical education, and from this, he gained an interest in comparative anatomy and surgery. From the age of 16, he wished to become a surgeon. In 1848, he enrolled at University College London (one of the few universities open to Quakers), where he studied botany, and later attaining a BA. At the age of 26, he graduated with a Bachelor of Medicine with the Royal College of Surgeons. Writing to his father, he wrote about how much he felt an inner calling to the profession of being a surgeon.

“If the love of surgery is a proof of a person’s being adapted for it, then certainly I am fitted to he a surgeon; for thou can’st hardly conceive what a high degree of enjoyment I am from day to day experiencing in this bloody and butchering department of the healing art. I am more and more delighted with my profession.”

In 1846, he was present at the first operation performed with anaesthetic in London. A scientific development which would have important consequences for his life’s work.

In 1854, he moved to Edinburgh where he became an assistant to the famous surgeon James Symes at the Edinburgh Royal Infirmary.

In 1857, he married Agnes Syme, the daughter of his chief surgeon. Agnes was also interested in medical research and became an active partner in Lister’s investigations over the remainder of his life. They were close but had no children. 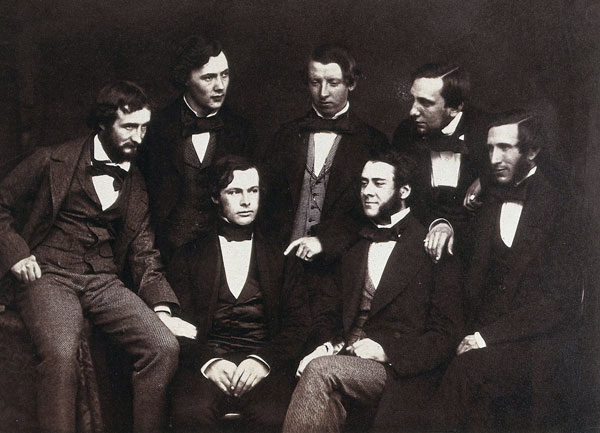 Lister at Glasgow University. Lister is on the front row with hands together

In 1861, he was elected professor of surgery at Glasgow University. While here Lister read an influential paper by Louis Pasteur on germ theory. Pasteur’s works investigated bacteria in food and suggested 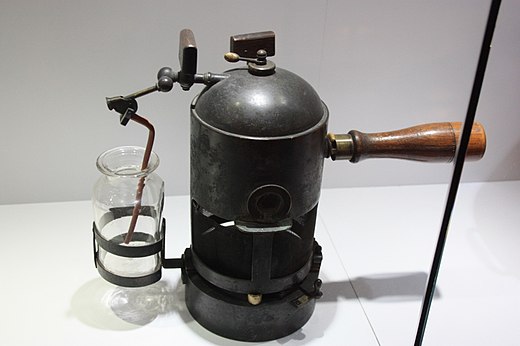 ways to kill micro-organisms. For food, Pasteur used heat, but Lister tried to find a chemical that would sterilise instruments and human tissue. Lister experimented with the use of carbolic acid. In August 1865, he used Carbolic acid as an antiseptic in the treatment of a young boy with a compound leg fracture from being run over by a cart in the street. Lister was surprised to find that a few days after the operation the bandage treated with carbolic acid did not develop any suppuration (pus) or gangrene. From this promising beginning, Lister developed a procedure for washing clothes, instruments and bandages and sterilising with carbolic acid.

At the time, there was little understanding of the connection between a lack of cleanliness and post-operative infection. It was believed sepsis was spread by bad air – preventative methods included trying to ‘air the hospitals’ around midday. Cleanliness was largely ignored – in fact; surgeons would often wear dirty, bloodstained cloaks as a proud mark of their experience. Lister estimated that in 1861, 45-50% of amputation cases in Glasgow hospital died from sepsis. In fact, at the time, there was a movement to abolish surgery in hospitals because of the very high death rate. However, after Lister introduced his new antiseptic routine in hospitals, he found the mortality rate fell from 45% to 15% in his male accident ward. Lister stated

“previous to its introduction, the 2 large wards in which most of my cases of accident and of operation are treated were amongst the unhealthiest in the whole of surgical division at the Glasgow Royal Infirmary (…) but since the antiseptic treatment has been brought into full operation, (…) my wards (…) have completely changed their character; so that during the last 9 months not a single instance of pyaemia, hospital gangrene or erysipelas has occurred in them.” 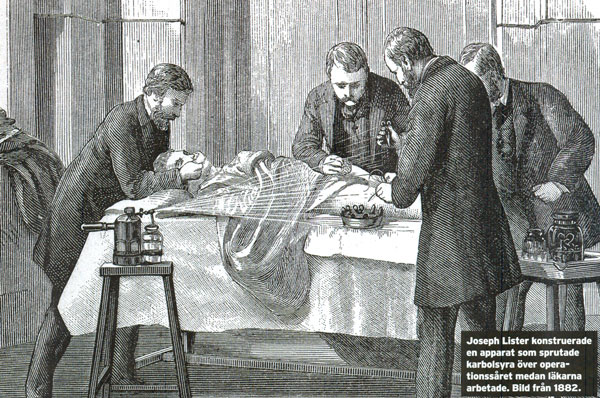 Lister’s work was first published in the Lancet in March 1867. When Lister began publishing his findings, he was met with widespread opposition from within the medical profession. In 1873, The Lancet warned against Lister’s new ideas. However, despite some drawbacks of carbolic acid, other surgeons were receptive and some began using these new techniques. Lister found a greater receptivity on the continent. During the Franco-German war, Germans had also experimented with antiseptic methods. As a result, he received many visitors from the continent. In 1875, he was warmly welcomed when he visited Germany. In 1876, he made a less successful visit to the US.

In addition to the development of antiseptic surgery, Lister also pioneered new surgical techniques such as ligatures, sutures (a row of stitches) and an improved method of mastectomy. In 1877, he performed a revolutionary treatment for a fractured kneecap. Lister took a simple fracture into a compound fracture. Usually, this would not be attempted because of the risk of infection from a compound fracture. But, Lister was confident in his antiseptic prevention methods. The success of these knee operations was a key factor in changing perceptions about his antiseptic methods.

From the 1880s, Lister’s pioneering ideas were increasingly accepted and, as a result, he was given greater prestige and honours. In 1881, he was elected President of the Clinical Society of London. Between 1895 and 1900, he was president of the Royal Society. In 1897, he was given a peerage as Baron Lister of Lyme Regis.

After his wife’s death in 1893, Lister mostly retired from public view. He stopped writing and suffered a stroke. However, he still kept on top of the latest antiseptic studies. In August 1902, King Edward VII suffered from appendicitis two days before his scheduled coronation. At the time, removing the appendix was a very risky operation, due to the risk of infection. The surgeons consulted Lister before operating and they followed his advice to the letter. After surviving the operation, the King sent a message to Lister

“I know that if it had not been for you and your work, I wouldn’t be sitting here today.”

It was a fitting recognition for Lister’s life work and symbolic of the near-total acceptance of his methods, after the initial resistance.

Lister was a quiet, unassuming man and was deeply religious. Although brought up in the Quaker faith, he converted to the Scottish Episcopal tradition. Both religious faiths influenced his strong work ethic and a lack of interest in social success or monetary reward.

“If we had nothing but pecuniary rewards and worldly honours to look to, our profession would not be one to be desired. But in its practice you will find it to be attended with peculiar privileges, second to none in intense interest and pure pleasures. It is our proud ofﬁce to tend the fleshly tabernacle of the immortal spirit, and our path, rightly followed, will be guided by unfettered truth and love unfeigned. In the pursuit of this noble and holy calling I wish you all God-speed.”

In the twentieth century, there was a continued development of preventative medicine. Lister’s methods evolved into asepsis and sterile techniques. However, he takes credit for changing the way doctors approached operations and the conditions of the hospital. Lister’s great contribution was to link Pasteur’s germ theory to a practical change in operational procedures of doctors.

The Butchering Art: Joseph Lister’s Quest to Transform the Grisly World of Victorian Medicine by Lindsey Fitzharris at Amazon

Famous doctors through history – from Hippocrates to William Harvey and Joseph Lister.