After centuries of religious persecution, injustice and disregard for human rights, the acceptance of human rights enshrined in law is one of the great achievements of modern history. Some of the earliest declarations can be seen in the US constitution, drafted by Thomas Jefferson.

“We hold these truths to be self-evident, that all men are created equal, that they are endowed by their Creator with certain unalienable Rights, that among these are Life, Liberty and the pursuit of Happiness.”

Also important was the declaration of human rights in France – a fundamental document of the French Revolution. Article I states:

“Men are born and remain free and equal in rights. Social distinctions can be founded only on the common good.”

It was introduced by General Lafayette, who received significant influence from Thomas Jefferson and the American Revolution.

In the Twentieth Century, the United Nations’ declaration of human rights cemented its importance for modern history. It was created in the aftermath of the Second World War, with over 50 member states participating in its drafting. It was adopted by the UN Security Council on 10 Dec 1948.

“Whereas recognition of the inherent dignity and of the equal and inalienable rights of all members of the human family is the foundation of freedom, justice and peace in the world.” (continue reading at UN)

Democracy gives everyone the right to participate in how they are governed. One definition of democracy is ‘Government of the people, by the people and for the people.’ Democracy has removed absolute power from tyrants, oligarchs and dictators.

Churchill once remarked that democracy was

Democracy evolved over the centuries, from experiments in direct democracy in Ancient Greece to universal suffrage in the Twentieth Century. See also: People who helped shape democracy

The United Nations is a global body aiming to secure international friendship and cooperation in the pursuit of human rights, democracy and world peace. Its predecessor, the League of Nations, was born out of the devastation of the First World War. The United Nations was founded in 1945 at the end of the Second World War. Outwardly, the UN may have many imperfections, but it still remains a globally important body for the promotion of the ideals of a oneness-world.

A work of art that has captured the imagination of humanity. The mysterious smile, the penetrating eyes. The air of mystique surrounding the Mona Lisa cannot easily be explained but, it is more than just a supreme example of Renaissance art, it encapsulates a unique spirit.

It is a work of art which captures the beauty, poignancy, poise and emotion of the greatest human dramas – love divine and love human.

The Works of William Shakespeare

Despite producing one of the earliest body of works in English, few have come close to matching William Shakespeare’s mastery of English in articulating the poetic range of human emotion and experience. Shakespeare’s plays, poetry and use of the English language have had a profound cultural impact on the world.

“All the world’s a stage,
And all the men and women merely players;
They have their exits and their entrances,
And one man in his time plays many parts,
His acts being seven ages. “

It is music which has the greatest capacity to lift humanity from ordinary earth-bound thoughts and emotions. The loftiest music can touch the psychic core of man and expand the consciousness of man. We could have chosen from the works of Beethoven, Mozart, or countless other musicians, but Ave Maria remains one of the loftiest pieces in the pantheon of music.

The early pioneers of ocean voyages took a step into the unknown in sailing to locations they had no prior knowledge of. It was at a time of relatively primitive technology – relying on skill, courage and determination. Ocean voyages were a crucial building block in the globalisation of the world, enabling global trade and the spread of knowledge.

It was the railways which ushered in the new Industrial age. Journeys which had previously taken days could now be done in a few hours. Building railways forged nations and brought people closer together. It also spread the genetic pool, by enabling much greater transport. Railways also enabled better living standards as a greater range of goods and food could be transported.

The Wright brothers finally achieved man’s historic quest to fly. The short flight in 1903 revolutionised air travel in the twentieth century and remains one of the great technical achievements.

The Development of Vaccines

For many centuries, the life expectancy of man was very low. Life was hard, short and painful. The great advances of medical science in the nineteenth and twentieth centuries have allowed people in many developed countries to have a much greater life expectancy. Some of the most important discoveries included the first vaccines developed by Edward Jenner (small Pox) Louis Pasteur (Rabies). The creation of vaccines and widespread vaccination programmes have led to the decline (and in some cases) extinction of dangerous diseases, such as polio, TB, smallpox and others.

Man on the Moon

It was a great scientific achievement to put man in space and then land on the surface of the moon. It shows that the horizons of man are not limited to this physical earth.

“That’s one small step for [a] man, one giant leap for mankind.”

The Olympics is one of mankind’s greatest achievements. It brings people together from all over the world and promotes a sense of international friendship and individual achievement. Although it has been marred by political protests in the past, recent Olympics have shown the capacity to unite the world. At the 2012 London Olympics, a woman represented every country for the first time. The Olympics has the capacity to fill newspapers with positive news. The Olympics has been an equalising force between different nations, for example, through running, many African nations have gained increased national pride.

Any great sporting achievement could have been used here. To run a marathon in close to two hours is perhaps an even greater athletic achievement. Alternatively, we could have chosen the fastest 100-metres time of Usain Bolt, in under 9.6 seconds. Yet, no sporting record is more iconic than the first mile run under 4 minutes by British athlete Roger Bannister. For many decades doctors and learned people had suggested it was physically impossible for man to run a mile under 4 minutes. But, once Roger Bannister had broken the psychological barrier many others soon followed. It showed the spirit of self-transcendence intrinsic to man.

Recently, the first sub-two-hour marathon was run by Eliud Kipchoge of Kenya (in a special event on flat course with pacemakers). To put it into perspective this involves running 26 consecutive 4:34-mile pace

On May 29th, 1953 Edmund Hilary and Sherpa Tensing Norgay finally conquered the crown of the world, reaching the top of Mount Everest. At 8,848 Metres, Mount Everest is the highest peak in the Himalayas, the Nepalese name it Sagarmatha – meaning Mother Goddess of the world.

Conventional wisdom suggests these were built with slaves, but, this view has become increasingly challenged. The truth is that there are many ancient structures such as Stonehenge which defy modern science even centuries later. The Great Pyramids remain a mystery but they stand as a colossal and imposing figure in the sands of Egypt.

Greatest achievement of mankind in the past few decades

Ending of Segregation and Apartheid

In the 1960s, many black Americans still faced widespread discrimination – politically, socially and economically. The civil rights movement, led by Martin Luther King, helped to pass legislation outlawing various types of racial discrimination. A key moment in US history was the March for Jobs and Freedom on Washington, 1963 when Martin Luther King delivered his “I Have a Dream” Speech.

In South Africa, Nelson Mandela led the movement to end the system of apartheid in South Africa. Mandela is credited with enabling a smooth transition which focused on integrating black and white people in the post-apartheid South Africa.

In the past century, there has been increased awareness that man needs to care for the planet and other living creatures. Rather than seeing the earth as something to be exploited, recent ideas see the earth as a holistic entity, in which we are interdependent with the environment and living creatures. Although man has been responsible for many species becoming extinct, in recent years, there have also been preservation efforts to save species, and in some cases, this has been successful: for instance in the case of the Gray Whale, Southern White Rhinoceros, Black Rhinoceros, African Savannah Elephant, and Mountain Gorilla.

Around the World in 80 Treasures: A Quest for Mankind’s Greatest Achievements 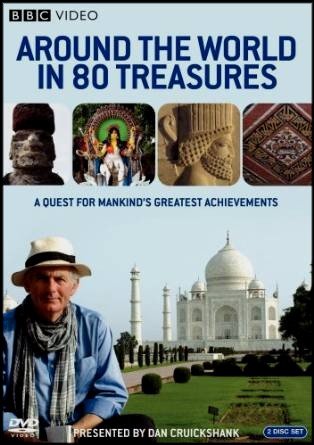 Around the World in 80 Treasures: A Quest for Mankind’s Greatest Achievements at Amazon

Books that changed the world. Important books which influenced and changed society and the world. Including The Republic, The Iliad, The Communist Manifesto and The King James Bible.