Saint Francis of Assisi (Giovanni Francesco di Bernardone; 1181/1182 – October 3, 1226) was a unique spiritual personality who gave up a life of wealth and social position to embrace a life of poverty and chastity – With the approval of the Pope, he founded a new Monastic Order, commonly known as the Franciscans. St Francis is considered one of the greatest saints in the Christian tradition and an example of a life lived in imitation of Jesus Christ.

“Most high, all powerful, all good Lord! All praise is yours, all glory, all honor, and all blessing. To you, alone, Most High, do they belong. No mortal lips are worthy to pronounce your name.”

St Francis of Assisi is also known as the patron saint of animals, the environment and one of the two patrons of Italy (with Catherine of Siena). 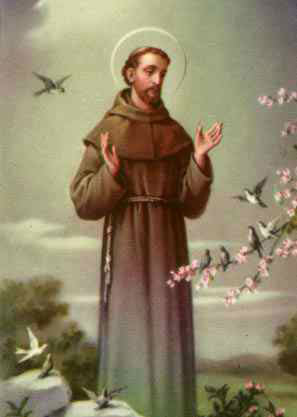 Francis was born in Assisi, Italy to Pietro di Bernardone, a wealthy cloth merchant in 1811. As a youngster, he was bright, popular and athletic, though he occasionally showed signs of his later love for charity and disdain for the world.

However, in 1201, aged 19, Francis joined a military expedition against Peruda. The campaign proved disastrous and, injured on the battlefield, Francis was taken prisoner for a year. During this period of imprisonment, a change within St Francis grew. He forsook the material pleasures and rewards of life and began to dedicate his life to Jesus Christ and the essential teachings of the Gospels.

“Blessed are the clean of heart: for they shall see God.”  They are clean of heart who despise earthly things and always seek those of heaven, and who never cease to adore and contemplate the Lord God Living and True, with a pure heart and mind. “

Various stories suggest St Francis began to display seemingly erratic behaviour – such as giving away his father’s wealth, giving away his own clothes,  going to various churches and looking after outcasts such as lepers.

It was during this period, that St Francis had a mystical vision in a dilapidated church. The Icon of Christ Crucified said to him, “Francis, Francis, go and repair My house which, as you can see, is falling into ruins”.

This vision gave Francis a clear mission in life and he embraced a life of poverty, chastity and devotion to Jesus Christ. He spent much of his time in prayer and meditation. Gradually, he began to attract other young men, attracted by his spiritual fervour and renunciation. Initially, Francis and his band of men were outside the traditional church hierarchy which caused some consternation among local bishops and powerful people. Because of the ongoing difficulties, Francis resolved to make a pilgrimage to the Vatican in Rome to try and gain an audience with the Pope.

Much to everyone’s surprise, Francis succeeded in not only meeting the Pope but, also gaining approval for a new order based on the principles of poverty and the spirit of the Gospels. It is said the Pope at first refused, but later had a dream where he was given to see the spiritual nature of St Francis.

With this papal approval, St Francis was able to grow his mission and his fellow friars travelled around Italy and Europe founding spiritual communities based on the teachings of St Francis.

St Francis also was a close spiritual confidant of St Clare of Assisi who also gave up much wealth and privilege to embrace a life of poverty.

In 1219, accompanied by another friar, St Francis went to Egypt hoping to speak with the Sultan of Egypt about Christianity. At the time a Crusader army was camped outside the city after a fierce battle the year before. But, Christian sources suggest St Francis was granted an audience with the Sultan of Egypt. It is not clear what transpired, but it was still a significant event for a Christian to be granted a friendly and peaceful audience with a Muslim Leader during the period of the Crusades. After the Crusader period ended, it was Franciscans alone of the Catholic Church who were allowed to stay in the holy city of Jerusalem as custodians of the Christian tradition and important places of worship, such as the Holy Sepulchre of the Lord.

Many miracles have been associated with St Francis. In particular, people recorded that St Francis seemed to have a close connection with all animals, especially birds. When St Francis would give a sermon, it is said birds would come to listen. St Francis said of birds:

“My sister birds, you owe much to God, and you must always and in everyplace give praise to Him; for He has given you freedom to wing through the sky and He has clothed you… you neither sow nor reap, and God feeds you and gives you rivers and fountains for your thirst, and mountains and valleys for shelter, and tall trees for your nests. “

St Francis was noted for his love of all of God’s creation, he often referred to “Brother Sun” and “Sister Moon,”. He saw in everything a part of God’s creation. One story about St Francis relates to how he was able to tame a wild wolf – in exchange for making a deal where the villagers would promise to feed the hungry wolf.

Around 1220, St Francis set up one of the first known nativity scenes at Greccio near Assisi. St Francis used live animals around the manger of Jesus; St Francis hoped that people would gain a much more vivid impression of the humble nature of Jesus’ birth. The nativity scene became an important aspect of the Christian religion at Christmas time

As the order grew in numbers, it became necessary to institute more rules and formal organisational structure. The order was too big to rely on St Francis’ personal example and simple approach to spirituality. After the rules were ordained by the Pope, St Francis began retreating from external affairs, spending his time in contemplation and prayer. St Francis was also a noted writer and poet. He wrote in common tongue Italian (a dialect of Umbria), eschewing Latin as he believed ordinary people should be able to read anything written.

Later in his life, it is also recorded that St Francis received the stigmata ‘five wounds of Christ on the cross’.

After a period of illness and suffering, St Francis died on the evening of October 3, 1226, singing Psalm 142– “Voce mea ad Dominum”.

Just two years after his death on July 16, 1228, he was pronounced a saint by Pope Gregory IX.

St Francis is often held up as an inspiring example of someone who most closely imitated the life of Christ in words, deeds and spirit. St Francis had a deep love for Christ and willingly embraced poverty, chastity and a simple life of humility. 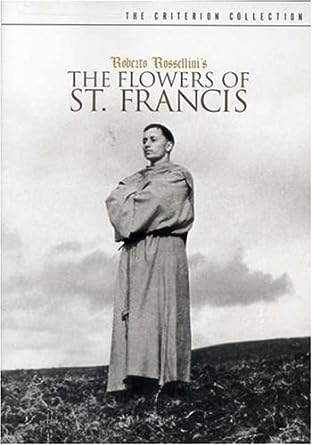 There have been several films about the life of St Francis, I particularly recommend:

* The Flowers of St. Francis, a 1950 film directed by Roberto Rossellini and co-written by Federico Fellini. This captures the spontaneous and joyful spirit that St Francis embodied.

The Flowers of St. Francis at Amazon.

Francis of Assisi: A New Biography

Francis of Assisi: A New Biography at Amazon

The Lessons of Saint Francis

The Lessons of Saint Francis at Amazon