Pope Francis (Jorge Mario Bergoglio) was elected Pope of the Catholic Church in 2013, he took the name Francis after Saint Francis of Assisi, who was known for his embrace of poverty and chastity.

Since his election, Pope Francis has stamped his own authority on the Church. In particular, he has sought to emphasize the traditional principles in the gospels of humility, charity and modesty. He has sought to encourage the church to place more emphasis on personal religious practise and concern for the poor, rather than issues related to abortion, contraception and homosexuality. He has personally rejected the more luxurious apartments in the Vatican, preferring to choose simple garments and live in more simple accommodation.

“Let us allow Jesus into our lives, and leave behind our selfishness, indifference and closed attitudes to others.”

Jorge Mario Bergoglio was born in Flores, a suburb of Buenos Aires, on 17 December 1936.

He attended a technical secondary school, graduating with a diploma in chemistry. He worked as a chemist in a food laboratory for a few years.

In 1955 (aged 19), he began studying at a local seminary in Buenos Aires. On March 11, 1957, he entered the Society of Jesus (Jesuits) as a novice. He went to Santiago, Chile where he studied humanities. On March 12, 1960, he took his initial vows and officially became a Jesuit. During the 1960s, he worked as a teacher, teaching literature and psychology in Sante Fe, and Buenos Aires, Argentina.

On 13 December 1969, after finishing his theological studies, he was ordained to the priesthood and became a professor of theology at the seminary of San Miguel. Bergoglio took his perpetual vows in 1973 and was appointed Provincial Superior of the Society of Jesus in Argentina from 1973 to 1979. These were difficult years because of the military junta ruling Argentina. Some of Bergoglio’s fellow Jesuits refused to follow the dictates of the government and sought to help left-wing activists in the slums who were being rounded up. Faced with a difficult dilemma, Bergoglio decided to deal officially with the junta – he felt it was important to protect the members of the order. Some Jesuits who were arrested were critical of Bergoglio’s actions in not more vigorously safeguarding two priests who were arrested and disappeared by the regime. In an interview in 2010, Bergoglio rejected accusations of aiding the junta, saying:

“On the contrary, I tried to help many people at the time,”

After the death of Pope John Paul II, Bergoglio was said to be a realistic candidate to become the new pope. But, instead, a strong conservative Cardinal Ratzinger was chosen. However, in 2013 rather unexpectedly, Pope Benedict XVI announced his retirement. Bergoglio was elected on the second day of the Papal conclave on 13 March. Explaining his choice of name, Pope Francis said of his patron saint:

“The man who gives us this spirit of peace, the poor man,… How I would like a poor Church, and for the poor”. 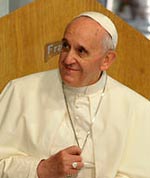 Pope Francis developed a reputation for humility and simplicity. He has often chosen to live in simpler accommodation and rejected the more palatial bishop’s residences. When elected Pope, he preferred to stay in his current accommodation and didn’t move into the Vatican suites. As Archbishop, he took public transport and engaged in the Holy Thursday ritual of washing the feet of the poor, whether in jail or hospital.

He has expressed a strong commitment to social justice, arguing that the gospels express an important commitment to reaching out to the disadvantaged of society and working to improve conditions of the poor.

“Let us ask the Lord to give us the gentleness to look upon the poor with understanding and love, devoid of human calculation and fear.” 24 Sep, 2013

Doctrinally, he is considered a conservative. As archbishop, he instigated pro-life work to prevent abortion. In 2007, he criticised the Argentinian government when it intervened to allow an abortion for a mentally handicapped woman who had been raped.

“The church’s pastoral ministry cannot be obsessed with the transmission of a disjointed multitude of doctrines to be imposed insistently, (…) We have to find a new balance; otherwise even the moral edifice of the Church is likely to fall like a house of cards, losing the freshness and fragrance of the Gospel.”

Pope Francis sees improving dialogue between different faiths and religions as an important work of the Catholic church. He has stated that his title ‘Pontiff’ means ‘builder of bridges’ and he has sought to reach out to both non-believers and other religious leaders. People have commented he is sincere and has a strong capacity to create meaningful dialogue, especially with the Eastern Orthodox churches.

As Pope, he has raised the issue of corruption within the church and has warned that as Pope he will not tolerate ongoing corruption and that the punishment for corrupt people should be as, it mentions in the Bible, being tied to a rock and thrown into the sea. He has announced changes to the Vatican bank to make it more transparent. Some argue that the Mafia use the bank for money laundering and are concerned by the Pope’s investigation.

On social issues, he has indicated a more liberal attitude to homosexuals. In an informal press conference, he said that he personally does not judge people because of their sexuality. Though church teachings on homosexuality remain.

Pope Francis has frequently reiterated the importance for Catholics to wholeheartedly embrace and profess in Jesus Christ as their salvation. He has said that prayer should not be reduced to a weekly 20 minutes, but should become part of life. He has stressed the importance of rejecting worldliness and putting spiritual principles first.

“Our life must be centred on what is essential, on Jesus Christ. Everything else is secondary.” – (9 Nov, 2013)

“If money and material things become the center of our lives, they seize us and make us slaves” (29 Oct, 2013)

Pope Francis is the first pope from the Americas and the first Jesuit Pope. Like Pope John Paul II, he is said to have a strong devotion to the Virgin Mary. He is also fond of St Therese of Lisieux and often includes a picture of her in his letter.

In July 2014, he released ten tips for happiness which included:

Pope Francis’s reforming papacy has also met opposition from both within and without the Vatican. A divisive issue for the church has been the issue of insisting priests must be celibate. Francis had been more willing to consider relaxing the rule of celibacy and allow married men to become priests. However, conservative figures in the church, focused on the former Pope Benedict successfully lobbied to maintain the rule on celibacy. Pope Francis responded to shortage of priests by encouraging people to pray for an increase in priestly vocations. Francis also took the opportunity to speak out on the destruction of the Amazon rainforest, arguing people should ‘feel outrage’ over the loss of habitat. Pope Francis intervention caused a sharp rebuke from Brazil’s far-right president Jair Bolsonaro. In early Jan 2020, Pope Francis apologised after appearing to slap the hand of a pilgrim grabbed at the Pope during a visit to the Vatican. A few days later he referenced the incident and said

“I apologise for the bad example yesterday … sometimes even I lose patience,” He also later joked to some waiting nuns – saying don’t bite. His contriteness and good humour in face of difficulty is a hallmark of his papacy and is warmly regarded across the world.

Pope Francis in His Own Words

Pope Francis: Conversations with Jorge Bergoglio: His Life in His Own Words at Amazon