Pope John Paul II was one of the most memorable Pope’s in the modern age. He lived through the centuries most turbulent times and offered a clear moral stance and direction to the Catholic Church. He also played an important role in the transition from Communism to greater democracy in Eastern Europe.

“Strengthen the bonds that unite us and eliminate all that has divided us in the past.”

Born in Poland, 18th May 1920, Karol Wojtyla was brought up in a turbulent period. As a young man, he lived through the brutal Nazi occupation of Poland. He witnessed many atrocities and on occasions narrowly avoided with his life. It was during the war that he made the decision to train to be a priest; this had to be done clandestinely. During the war, he was also credited with trying to help Jewish friends escape persecution.

The defeat of Nazi Germany saw Poland suffer under a new occupation. Though much less brutal, the Communist state was suspicious of the Catholic church and Karol was frequently bugged by state officials. Nevertheless, the young Pope developed a good reputation. He had intelligence, charisma and inspired many of his young students. His sharp intellect and practical understanding led to his rapid promotion within the Catholic clergy. At the age of 38, he was made the youngest bishop in Poland.

In 1978 after the death of Pope Paul VI and John Paul I (after only 33 days), Karol was elected pope making him one of the youngest pope’s and the first pope from Poland.

It was rather a surprise for John Paul. He accepted the position with humility

‘With obedience in faith to Christ, my Lord, and with trust in the Mother of Christ and the Church, in spite of great difficulties, I accept.’

Pope John Paul soon put his mark on the papacy. He travelled widely and frequently to over 120 countries. His first visit to Poland in 1978 was a sensation with huge crowds everywhere. It was credited with sparking the solidarity movement of 1980 and providing moral support for those seeking to end Soviet rule.

Spending years in Communist-dominated Poland, Pope John Paul had great hopes that he could see the overthrow of Communism. President Mikhail Gorbachev paid a generous tribute to Pope John Paul’s contribution to the transition of Eastern Europe.

“Everything that happened in Eastern Europe in these last few years would have been impossible without the presence of this Pope and without the important role, including the political role, that he played on the world stage.”

Pope John Paul also made a historic visit to South Africa in 1995, he had promised he would not visit South Africa until the system of apartheid was ended. He was met at the airport by Nelson Mandela. Mandela greeted him with the words

“To say your visit is long overdue is to pay tribute to you own abhorrence of the system of apartheid. You delayed your visit to this country because you viewed with disdain a system that treated God’s children as lesser human beings.”

Mother Teresa and John Paul were close to each other and full of admiration for their respective services. In 1994, Time magazine asked Mother Teresa for her assessment of John Paul, she replied:

Ever sustained by a profound faith,
Nourished by unceasing prayer,
Fearless in unshakeable Hope,
Deeply in Love with God.”

After Mother Teresa’s death, Pope John Paul II pushed for her canonisation. Pope John Paul made the most number of saints during his papacy. He was key in giving legitimacy to Maria Faustina (a Polish mystic) and Padre Pio (a charismatic Italian mystic)

Pope John Paul II maintained good relations with other religions showing an interest in interdenominational meetings not previously seen by the Vatican. For example at Assisi in 1986, at the World day of prayer for peace, over 120 different denominations were represented as people offered prayers for peace.

In particular, his apology for anti-semitic acts in the past encouraged better relationships between Jews and Catholics.

“We are deeply saddened by the behaviour of those who in the course of history have caused these children of yours to suffer, and asking your forgiveness we wish to commit ourselves to genuine brotherhood with the people of the Covenant.” 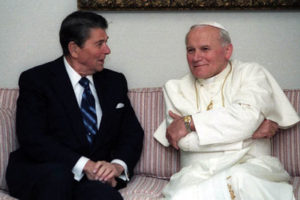 The pope made over 100 apologies for various misdeeds such as women, Galileo, role in slavery, and the silence of Catholics during the holocaust. Pope John Paul II made an important visit to Greece in 2001. He was the first pope to visit the country in 1,291 years. He met the head of the Church of Greece and offered an apology for past misdeeds of the Catholic Church such as the sack of Constantinople. The two leaders shared a common declaration of supporting Christianity in Europe and avoiding ‘all recourse to violence, proselytism and fanaticism, in the name of religion.’ In the same year, he became the first pope to pray in a mosque (in Damascus, Syria). He kissed the Qu’ran, an act that was appreciated by many Muslims, though he was criticised by more conservative elements within the Catholic Church.

Pope John Paul II had a deep devotion to the Virgin Mary. During his papacy, he visited Lourdes and Fatima. In 1981, someone made an assassination attempt, and although shot, the Pope survived. He credited his survival to the intervention of Our Lady of Fatima, noting it happened on the sixtieth anniversary of the Fatima apparitions. He was the first pope to have the Virgin Mary’s initials added to his banner.

The pope later met his assassin, Mehmet Ali Agca, in prison and offered him forgiveness.

On moral issues, the Pope was a conservative. He opposed the death penalty, abortion, contraception, female priests and homosexual marriages. He was criticised for his opposition to the use of condoms to fight STD such as AIDS.

He was opposed to the Iraq war in 2003, saying the United Nations should be involved in resolving conflict not unilateral force

“Wars generally do not resolve the problems for which they are fought and therefore… prove ultimately futile.” ”

Towards the end of his life he was diagnosed with Parkinson’s disease. In 2005, his health rapidly deteriorated – suffering from influenza, a urinary tract infection, septic shock and low blood pressure. On 2 April 2005, he said his final words “Allow me to depart to the house of the Father” and he died later in the day, aged 84 years old.

John Paul II was canonised by Pope Francis on 27 April 2014. His ‘feast-day’ is 22 October – to mark the date he was elected Pope.

The Biography of Pope John Paul II at Amazon