Mirabai was a great saint and devotee of Sri Krishna. Despite facing criticism and hostility from her own family, she lived an exemplary saintly life and composed many devotional bhajans. Historical information about the life of Mirabai is a matter of some scholarly debate. The oldest biographical account was Priyadas’s commentary in Nabhadas’ Sri Bhaktammal in 1712. Nevertheless, there are many oral histories, which give an insight into this unique poet and saint of India.

Mira was born around the start of the 16th Century in the Chaukari village in Merta, Rajasthan. Her father was Ratan Singh a descendant of Rao Rathor, the founder of Jodhpur. When Mirabai was only three years old, a wandering Sadhu came to her family’s home and gave a doll of Sri Krishna to her father. Her father took saw this as a special blessing but was initially unwilling to give it to her daughter, because she felt she would not appreciate it. However, Mira had, at first sight, become deeply enamoured with this depiction of Lord Krishna. She refused to eat until the doll of Sri Krishna was given to her. To Mira, this figure of Sri Krishna embodied his living presence. She resolved to make Krishna her lifelong friend, lover, and husband. Throughout her turbulent life, she never wavered from her youthful commitment.

On one occasion, when Mira was still young, she saw a wedding procession going down the street. Turning to her mother, she asked in innocence, “Who will be my husband?” Her mother replied, half in jest, half in seriousness. “You already have your husband, Sri Krishna.” Mira’s mother was supportive of her daughter’s blossoming religious tendencies, but she passed away when she was only young.

At an early age, Mira’s father arranged for her to be married to Prince Bhoj Raj, who was the eldest son of Rana Sanga of Chittor. They were an influential Hindu family and the marriage significantly elevated Mira’s social position. However, Mira was not enamoured of the luxuries of the palace. She served her husband dutifully, but in the evening she would spend her time in devotion and singing to her beloved Sri Krishna. While singing devotional bhajans, she would frequently lose awareness of the world, entering into states of ecstasy and trance.

“Go to that impenetrable realm
That death himself trembles to look upon.
There plays the fountain of love
With swans sporting on its waters.”

– (1) Go To That Impenetrable Realm

Her new family did not approve of her piety and devotion to Krishna. To make things worse, Mira refused to worship their family deity Durga. She said she had already committed herself to Sri Krishna. Her family became increasingly disproving of her actions, but the fame and saintly reputation of Mirabai spread throughout the region. Often she would spend time discussing spiritual issues with Sadhus, and people would join in the singing of her bhajans. However, this just made her family even more jealous. Mira’s sister-in-law Udabai started to spread false gossip and defamatory remarks about Mirabai. She said Mira was entertaining men in her room. Her husband, believing these stories to be true, tore into her room with sword in hand. However, he saw Mira only playing with a doll. No man was there at all. Throughout these hysterical slanders, Mirabai remained unmoved by both the criticism and praise of the world.

“This infamy, O my Prince
is delicious!
Some revile me,
others applaud,
I simply follow my incomprehensible road
A razor thin path
but you meet some good people,
A terrible path but you hear a true word

Turn back?
Because the wretched stare and see nothing?
O Mira’s Lord is noble and dark,
and slanderers
rake only themselves
over the coals” (2)

Mira’s fame spread far and wide, and her devotional bhajans were sung across northern India. In one account, it is said that the fame and spirituality of Mirabai reached the ears of the Moghul Emperor Akbar. Akbar was tremendously powerful, but he was also very interested in different religious paths. The problem was that he and Mirabai’s family were the worst enemies; to visit Mirabai would cause problems for both him and Mirabai. But Akbar was determined to see Mirabai, the Princess – Saint. Disguised in the clothes of beggars, he travelled with Tansen to visit Mirabai. Akbar was so enamoured of her soulful music and devotional singing that he placed at her feet a priceless necklace before leaving. However, in the course of time, Akbar’s visit came to the ears of her husband Bhoj Raj. He was furious that a Muslim and his own arch enemy and set eyes upon his wife. He ordered Mirabai to commit suicide by drowning in a river. Mirabai intended to honour her husband’s command, but as she was entering the river, Sri Krishna appeared to her and commanded her to leave for Brindaban where she could worship him in peace. So with a few followers, Mirabai left for Brindaban, where she spent her time in devotion to Sri Krishna. After a while her husband became repentant, feeling that her wife was actually a real saint. Thus he travelled to Brindaban and requested her to return. Mirabai agreed, much to the displeasure of the rest of her family.

However soon after Mira’s husband died; (fighting in battles with the Moghul emperors). This made the situation even worse for Mirabai. Her father in law, Rana Sanga, saw her husband’s death as a way to get rid of Mirabai. He commanded her to commit Sati (when the wife commits suicide by throwing herself on her husband’s funeral pyre). However, Mirabai, with the direct inner assurance of her beloved Sri Krishna, said that she would not do this. Her real husband, Sri Krishna had not died. She would later say in her poetry.

“I will not commit sati. I will sing the songs of Girdhar Krishna, and will not become sati because my heart is enamoured of Hari.” (3)

After this experience, her family continued to torture her. They restricted her movements and sought to make her life as uncomfortable as possible. In the face of all these trials and tribulations, she remained detached from her physical suffering. There was nothing that could disturb her inner connection to Giridhara (epithet of Sri Krishna as young cowherd boy). It is said that twice her family tried to kill her, once through a venomous snake and once through poisonous drink. On both occasions, it is said Mirabai, protected by the Grace of Sri Krishna, came to no ill harm.

However, the relentless torments and hostility interfered with her life of devotion and contemplation on Krishna. She sought the advice of learned men and saints. They advised her to leave the palace and return to Brindaban. Secretly, with some followers, she slipped out of the palace and escaped to the holy city of Brindaban. In Brindaban Mirabai was free to worship Giridhara to her heart’s content. She would spend her time in singing bhajans and in ecstatic communion with Krishna. Like a true Bhakti, she worshipped God wholeheartedly. The riches of the world offered no attraction to Mirabai; her only satisfaction came from her single-minded devotion to Sri Krishna. Her soul was ever yearning for Krishna. She considered herself to be a Gopi of Vrindaban, mad only with pure love for Krishna.

“I am mad with love
And no one understands my plight.
Only the wounded
Understand the agonies of the wounded,
When the fire rages in the heart.
Only the jeweller knows the value of the jewel,
Not the one who lets it go.
In pain I wander from door to door,
But could not find a doctor.
Says Mira: Harken, my Master,
Mira’s pain will subside
When Shyam comes as the doctor.”

Her devotion and spiritual magnetism were infectious. She inspired many to follow the path of Vaishnavism. As Swami Sivananda stated:

“Mira wafted the fragrance of devotion far and wide. Those who came in contact with her were affected by her strong current of Prem. Mira was like Lord Gauranga. She was an embodiment of love and innocence. Her heart was the temple of devotion. Her face was the lotus-flower of Prem. There was kindness in her look, love in her talk, joy in her discourses, power in her speech and fervour in her songs.” (5)

Even learned Sadhus would come to her for inspiration. There is a story of one respected Spiritual Master, who refused to speak to Mirabai because she was a woman. Mirabai replied there was only one real man in Brindaban, Sri Krishna; everyone else was a Gopi of Krishna. On hearing this, the spiritual Master accepted the wisdom of Mirabai and agreed to talk to her. Later, Mirabai would become his student.

Much of what we know about Mirabai comes from her poetry. Her poetry expresses the longing and seeking of her soul for union with Sri Krishna. At times, she expresses the pain of separation and at other times the ecstasy of divine union. Her devotional poems were designed to be sung as bhajans, and many are still sung today.

“Mira’s songs infuse faith, courage, devotion and love of God in the minds of the readers. They inspire the aspirants to take to the path of devotion and they produce in them a marvelous thrill and a melting of the heart.” – Swami Sivananda. (6)

Mirabai was a devotee of the highest order. She was immune to the criticism and suffering of the world. She was born a princess but forsook the pleasures of a palace for begging on the streets of Brindaban. She lived during a time of war and spiritual decline, but her life offered a shining example of the purest devotion.  Many were inspired by her infectious devotion and spontaneous love for Sri Krishna. Mirabai showed how a seeker could attain union with God, only through love. Her only message was that Krishna was her all.

“My Beloved dwells in my heart,
I have actually seen that Abode of Joy.
Mira’s Lord is Hari, the Indestructible.
My Lord, I have taken refuge with Thee,
Thy slave.”

It is said in her death she melted into the heart of Krishna. Tradition relates how one day she was singing in a temple when Sri Krishna appeared in his subtle form. Sri Krishna was so pleased with his dearest devotee that he opened up his heart centre, and Mirabai entered leaving her body while in the highest state of Krishna consciousness. (8)

“Mirabai was a devotee of the high, higher, highest order. Among the saints of India, she is absolutely unparalleled. She composed many, many bhajans, which are prayerful songs to God. Each song Mirabai wrote expressed her inspiration, aspiration and sleepless self-giving.” (9)

The Poetry Of Mirabai 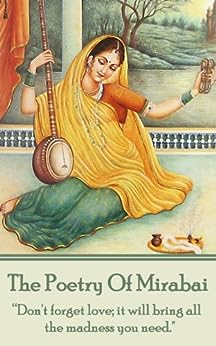 The Poetry Of Mirabai at Amazon