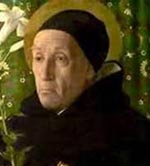 Meister Eckhart (1260- 1327) was a Germany mystic, theologian and philosopher. Eckhart taught a radical religious philosophy of seeing God in all. His mystical experiences and practical spiritual philosophy gained him a popular following, but it also caused him to be tried for heresy by a local inquisition. Despite having writings condemned as heretical, he remains an important source of mystical experience within the Christian tradition.

Eckhart von Hochheim was born in Tambach, near Gotha in the state of Thuringia in modern-day central Germany. It was an influential province for the religious movements of middle age Europe; other influential religious figures born there include Mechthild of Magdeburg, Thomas Munzer and Martin Luther.

Little reliable evidence exists of his early life, but Eckhart appears to have had a university education in Cologne and possibly Paris. He joined the Dominican order and became a lecturer at the Dominican convent of St. Jacques in Paris. He also was appointed as Prior back near his birthplace of Erfurt. His reputation as a theologian and Prior must have been good as he was given responsibility for the Province of Saxon which meant he had responsibility for forty-seven convents in the region. He was considered a good and efficient administrator, but his greatest passion was giving sermons and preaching to the public.

In May 1311, Eckhart was invited back to teach in Paris. This was another confirmation of Eckhart’s reputation. It was a rare privilege for a foreigner to be twice invited back to Paris to teach. This post gave him the title Meister. (from the Latin Magister, master, teacher) In Paris, Eckhart was often involved in heated religious debates with members of the Franciscan order.

A primary part of Eckhart’s responsibilities lay in teaching members of the Dominican order, and also the uneducated general public. He gained a reputation as a powerful and thought-provoking teacher. His sermons and writings captured a mystical element that was underplayed or not mentioned in traditional Biblical and church teachings. Eckhart also had a capacity to simplify and speak in a plain language which appealed to ordinary people. This increased his personal popularity, and it was said his sermons were very well attended.

This is reminiscent of Jesus Christs’ saying ‘I and my Father are One’. It has also been used to illustrate how Eckhart’s philosophy was in harmony with Eastern mysticism which stresses the imminence of God.

A receptive mind. Eckhart was a considered a mystic because he taught the importance of making the mind quiet to be receptive to the presence of God.

“To the quiet mind all things are possible. What is a quiet mind? A quiet mind is one which nothing weighs on, nothing worries, which, free from ties and from all self-seeking, is wholly merged into the will of God and dead to its own.” – A Dazzling Darkness: An Anthology of Western Mysticism (1985) by Patrick Grant.

Detachment. Eckhart also taught the importance of detachment. Like other mystical teachings, Eckhart believed that the responsibility of a seeker was to detach the mind from earthly distractions, such as desire.

The omnipresence of God. Eckhart believed that God was present in all living things, though he differentiated between the Absolute God, which was beyond all form and the manifestation of God in the world.


“We shall find God in everything alike, and find God always alike in everything.” – Quoted in Geary’s Guide to the World’s Great Aphorists (2007) by James Geary, p. 232

Selfless service. Though Eckhart was a mystic, he also advocated selfless service in the world to help overcome the selfish nature of man.

As his popularity grew, some senior church figures were worried his teachings were heretical. In particular, the Archbishop of Cologne was concerned about Eckhart’s popular teachings to simple, uneducated people astray – “which might easily lead his listeners into error.”

In 1326, Eckhart was formally charged with heresy, and in 1326 the Archbishop of Cologne ordered an inquisitorial process. In February 1327, Eckhart made a passionate defence of his beliefs. He denied he had done anything wrong and made a public protestation of his innocence. Eckhart claimed that his sermons were designed to encourage ordinary people and monks to aspire to do good and develop an unselfish love of God. He may have used unorthodox language, but his intentions were noble and designed to make people appreciate the most important spiritual concepts of Christ’s teachings.

“If the ignorant are not taught, they will never learn and none of them will ever know the art of living and dying. The ignorant are taught in the hope of changing them from ignorant to enlightened people.”

“Through the higher love the whole life of man is to be elevated from temporal selfishness to the spring of all love, to God: man will again be master over nature by abiding in God and lifting her up to God.”

After he was found guilty by the Archbishop of Cologne, Eckhart travelled to Avignon where Pope John XXII set up a tribunal to investigate Eckhart’s appeal. In Avignon, Eckhart died before the Pope came to a final conclusion. After his death, the Pope described some of Eckhart’s teachings as heretical. It was considered an attempt to clamp down on mystical teachings. However, Eckhart was considered to have recanted these views before his death, so he was personally left without taint. This compromise was hoped to appease both his critics and his supporters.

After his death, his reputation was damaged by the Pope’s condemnation of some of his writings. But, he remained influential within the Dominican order. Not all his writings had been condemned, and many followers continued to read Eckhart’s writings. Many people who followed Eckhart’s teachings continued the Friends of God Movement, which existed in communities across the region. The new leaders were less radical than Eckhart, but they maintained his influence.

Eckhart’s mystical teachings were said to have been an important influence behind the anonymous 14th Century work Theologia Germanica. This anonymous work was influential in the Protestant Reformation. The Theologia Germanica was important because it criticised the role of the church hierarchy and stressed the importance of man’s direct link to God. These ideas were important for Martin Luther when he challenged the temporal power of the Roman Catholic Church.

In the Nineteenth and Twentieth Century, he teachings and legacies of Meister Eckhart have been appreciated by a wide range of spiritual traditions. Pope John Paul II quoted Meister Eckhart

“Did not Eckhart teach his disciples: ‘All that God asks you most pressingly is to go out of yourself … and let God be God in you” One could think that in separating himself from creatures the mystic leaves his brother humanity behind. The same Eckhart affirms that on the contrary the mystic is marvellously present to them on the only level where he can truly reach them, that is, in God.’

Many Catholics consider Eckhart’s teachings to be in conformity with orthodoxy – sharing similarities with Thomas Aquinas – a doctor of the church and fellow Dominican. Eckhart’s work is an important canon in the tradition of Christian spirituality and mysticism.

Meister Eckhart was brought back to prominence by several German philosophers who praised his work. This includes Franz Pfeiffer who republished Eckhart’s works in 1857. Schopenhauer, who translated the Upanishads compared Eckhart’s teaching to Indian and Islamic mystics. Schopenhauer said:

“Buddha, Eckhart and I all teach the same.”

Eckhart is also considered a great teacher by the Theosophical movement.