Religion has been a feature of the world for as long as it came into existence. Different religious traditions have played a major role in the evolution of society. This is a look at some of the benefits that the world has received from religion.

In summary, the main benefits of religion include

“Each religion has helped mankind. Paganism increased in man the light of beauty, the largeness and height of his life, his aim at a many-sided perfection; Christianity gave him some vision of divine love and charity; Buddhism has shown him a noble way to be wiser, gentler, purer, Judaism and Islam how to be religiously faithful in action and zealously devoted to God; Hinduism has opened to him the largest and profoundest spiritual possibilities. “

Religion has often been a vehicle for intolerance and fundamentalism; religion has been used as an excuse for persecution and war. But, religion in its purest form has provided many benefits for humanity.

Teachings of goodwill and the golden rule

“We must be bright and cheerful. Long faces do not make religion. Religion should be the most joyful thing in the world, because it is the best.”

Within all religions, there are teachings of goodwill to our fellow men. The golden rule of religious teaching is to treat others as we would like to be treated ourselves. At the World Parliament of Religions (1993), a declaration towards a Global Ethic was made. This principle was signed by 143 leaders from the major faiths. The simple declaration read:

“We must treat others as we wish others to treat us”

“Do to others what you want them to do to you. This is the meaning of the law of Moses and the teaching of the prophets.”

This principle is often ignored by votaries of religion, but without ethical teachings propagated by religions, there would have been even more conflict and division in the world. Religious ethics, such as the Golden Rule do provide a basis for encouraging better human behaviour.

It is true many adherents of religion have ignored the important religious teachings of goodwill and equality. But, a higher message of religion is that man is equal before God. This principle has inspired some religious reformers to campaign against injustice. For example, in the Nineteenth Century, many of the opponents of slavery were motivated by a belief that racism and slavery were incompatible with religious teachings on the inherent divinity of all men. For example, the Quakers, and Christians like William Wilberforce sought to end slavery because they believed slavery was incompatible with Christian charity.

The message of forgiveness

Some of the world’s great acts of forgiveness have been motivated by a religious ethic and faith in the importance of forgiveness. For example, Martin Luther King frequently used Christian language to preach a message of peace and forgiveness. Other great leaders inspired by religious teachings on forgiveness include Mahatma Gandhi, Nelson Mandela and the 14th Dalai Lama.

Man’s Thirst for the Unknowable

The religious urge to discover more about life has never left man. From primitive civilisations to the acme of Western civilisation, there have always been people unsatisfied with a purely materialistic interpretation of life. This has encouraged people to give priority to an inner life of prayer and meditation as well as outer achievements. Religion can give an opportunity for man to attain the ‘peace that passeth understanding’. Religion holds the promise of ultimate enlightenment. Buddhism teaches the goal of Nirvana, The Hindu Upanishads state:

“From Delight we came into existence.
In Delight we grow.
At the end of our journey’s close, into Delight we retire.”

Religious teachings emphasise the need for serving our fellow man. The loftiest teaching is to do this selfless service without expectation of reward or praise but to work with a feeling of oneness and identification with other people. In its purest form, religion can inspire people to serve the welfare of others, not out of ego, but out of a sense of divine duty. This principle of selfless service is found in all the main religions and has led to the foundation of many charitable works.

Within the context of religion, some of the most profound, moving and sublime music has been created. Even a non-religious person can appreciate the divine sacred music of Beethoven, Bach or Schubert. In Indian and Asiatic religion there is a similar strand of richly devotional music, that has enriched human culture.

“Religion, like poetry, is not a mere idea, it is expression. The self-expression of God is in the endless variety of creation; and our attitude toward the Infinite Being must also in its expression have a variety of individuality – ceaseless and unending.” 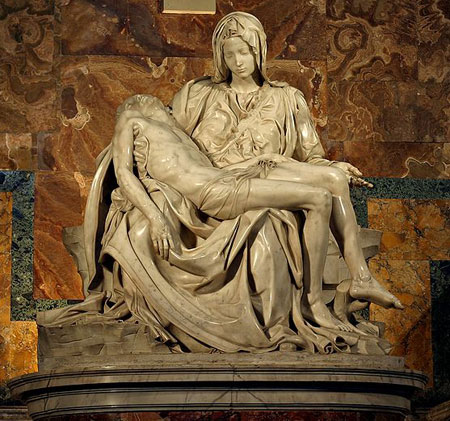 During the Renaissance, it was often organised religion which was the greatest patron of the arts. The Catholic church patronised some of the greatest works of Michelangelo such as the Sistine Chapel and the Pieta. The purest form of religion encourages the highest expression of the Divine through the artistic form.

Religion is often associated with long-standing dogmas, but religious and spiritual movements often begin as dynamic movements, which establish existing political, cultural and religious norms. Religious teachers, such as Jesus Christ, the Buddha, Guru Nanak challenged many social norms, such as caste systems and ossified social customs. Religion can become stale and ossified itself, but religious leaders and new spiritual movements have the capacity to think outside the box and offer different paths for people to follow.

Sense of community and belonging

Religion can be a main focus of the community. It can bring people together as they share common aspirations to lead a better life. A church, mosque or synagogue can be the centre of community life and provide an outlet for people to find friendship and common sense of purpose. Religion is more likely to cultivate a sense of community rather than just individuality.

Within every religion, there is outer imperfection. But, there are also teachings and a culture which can help lift up man to live a better, more fulfilling and more selfless life.

It is true that man has often misused the ideals of religion for their own selfish ends. Religion has become a source of pride and conflict because humanity has acted badly in the name of religion. But, there are many saints and religious figures who, inspired by religion, have made a significant contribution to the world.

This is not to say that religion is indispensable. One may live a deeply spiritual life, without being attached to a particular organised religion. But, religion may be the inspiration for someone to lead a better life. But, like many other things – religion is what we make of it.

The World’s Religions at Amazon