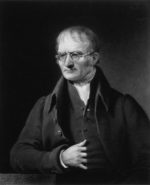 John Dalton (6 September 1766 – 27 July 1844) was an English Chemist who introduced atomic theory into chemistry, revolutionising the subject and laying the foundations for modern chemistry as we understand it. Dalton proposed ways to measure atomic weight and strengthened the importance of atoms in chemistry. In 1808, he published his classic textbook “A New System of Chemical Philosophy, Part I” (1808) which gave the first systematic list of atoms.

1. Small particles called atoms exist and compose all matter;
2. They are indivisible and indestructible;
3. Atoms of the same chemical element have the same chemical properties and do not transmute or change into different elements.

Dalton also pursued a wide range of interests from English grammar and physics to meteorology and colour blindness – a subject where he made ground-breaking discoveries.

Dalton was born in Eaglesfield near Cockermouth in the north Lake District in England. His family were Quaker and relatively poor – despite his father’s position as a teacher. At the age of 10, Dalton worked in service to a wealthy Quaker and received no more formal education. However, he continued to teach himself – proving highly intelligent and determined to learn. By the age of 15, he was fluent in Latin and was working as a teacher in a Quaker school in Kendal.

Growing up in Eaglesfield, he was inspired by Elihu Robinson a prominent Quaker and meteorologist. This sparked a lifelong interest in meteorology and for 57 years from 1787 to his death in 1844; he entered more than 200,000 observations on meteorology. In his spare time, he began writing scientific essays for journals and developing his own observations.

Whilst in the Lake District he would combine his love for the region’s hills with his passion for meteorology. Using a homemade barometer, he would climb mountains to ascertain their height. In an era before maps, Dalton became an authority on the region’s mountains and fells. Even when working away from the Lake District, he would return at least once per year to climb the fells.

Despite his precocious intellect and enthusiasm for studying, he did not pursue a career in law or medicine because at the time (dissenters (non-Anglicans) were barred from studying at English universities. However, he studied science informally under John Gough. In 1793, he was appointed to be a teacher of maths and natural philosophy at “New College” Manchester – a new dissenting university. He stayed there for seven years, before returning to his role as a private tutor. Around this time, his first work was published “Meteorological Observations and Essays.” (1793)

Shortly after his arrival in Manchester, Dalton studied the condition of colour blindness – something both he and his brother suffered from. Dalton postulated that colour blindness stemmed from discolouration of the liquid medium in the eyeball. This later proved to be inaccurate. However, Dalton’s careful, thorough and methodical enquiries into the subject were pioneering and became a template for the subject. Dalton was such an influential figure that Daltonism became a common term for colour blindness.

In 1800, he pursued experiments on the effect of the thermal expansion of gases. His experiments and conclusions were presented to The Manchester Literary and Philosophical Society and it showed that different liquids all showed the same variation in vapour pressure from the same variation in temperature. In 1802, he published “On the expansion of elastic fluids by heat” This showed that in a mixture of non-reacting gases, the total pressure exerted is equal to the sum of the partial pressures of the individual gases. This became known as “Dalton’s Law of partial pressure”

Dalton’s most influential work by far was his investigations into the atomic structure of elements. Dalton deduced that elements are made of extremely small particles, called atoms. The atoms are individual to each element but can be combined with other elements to form compounds which are multiples of the original atomic elements. He also stated atoms cannot be divided, created or destroyed – only in chemical reactions we see a change in how atoms combine.

For example, water is a combination of atoms from Hydrogen and Oxygen. H2O, (H2O, NH3)

Dalton also tried to predict the relative atomic weights of different elements, using hydrogen as the base weight of 1. He proposed a list of atomic weights – some of which proved to be correct like CO and CO2 (carbon dioxide) but some which were not correct, such as water, he proposed HO rather than H2O.

Atomic theory was not entirely new. The theory of the atom stretched back into classical time, and other scientists, such as his uncle Bryan Higgins were working on a caloric model for atoms. However, Dalton’s breakthrough was to provide a method for calculating relative atomic weights for chemical elements. Dalton’s real achievement was to study the atom and chemical compounds in a quantitative fashion.

In 1804, Dalton first proposed his law of multiple proportions. It was published in 1808 in “New System of Chemical Philosophy” The law states:

“If two elements form more than one compound between them, then the ratios of the masses of the second element which combine with a fixed mass of the first element will be ratios of small whole numbers.” 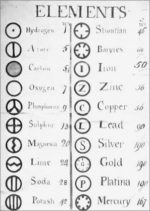 Lavoisier. Dalton was also helped by French chemist Joseph Proust who proposed a law of definite proportions. Dalton’s development was to show that atoms combined in fixed ratios. It enabled the basis for chemical formulas which are at the heart of modern chemistry and have importance for modern physics. Dalton published his “New System of Chemical Philosophy” in 1808 – where he listed 20 elements and 17 simple molecules. Though his symbols and list have been improved on, it was an innovative approach to the subject.

Dalton was criticised by Sir Humphrey Davy for being a ‘very coarse experimenter” Dalton didn’t always use the most exact instruments which were available. He preferred to trust in his skill, intuition and often ended up getting the results he had wanted. However, many of his experiments have been validated and despite the inadequacies of his equipment, he has proved successful from many perspectives.

Dalton lived a modest personal life, remaining unmarried and mostly devoted to his work. Despite his international reputation, he remained quite poor, living a simple life. James Forbes, a Scottish physicist, wrote in glowing terms after meeting Dalton in Manchester:

“He (Dalton) is generally styled by continental writers the Father of Modern Chemistry, and is one of the eight associates of the Institute. Yet this man between sixty and seventy is earning, as I had a peculiar satisfaction in seeing with my own eyes, a penurious existence by teaching boys the elements of mathematics, with which he is so totally occupied, that he can hardly snatch a moment for the prosecution of discoveries which have already put his name on a level with the courtly and courted Davy. But the remarkable thing is that this simple and firm-minded man preserves all the original simplicity and equanimity of his mind, and calmly leaves his fame, like Bacon, to other nations and future ages.” Life and letters of James David Forbes p. 450

Dalton continued to pursue experiments, and make meteorological observations and teach until his death. In later years, he taught the young chemist James Prescott Joule, who later became well-known for his investigations into heat. He lived in a home with Rev W. Johns and his wife. In 1837, he suffered a minor stroke, which led to a speech impairment. In 1844, he had a more devastating stroke and passed away within a day on 27 July 1844. Dalton’s reputation as a well-respected scientist led to a civil funeral with full honours. More than 40,000 people visited his coffin, while it was lying in Manchester Town Hall.