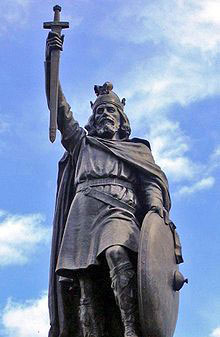 Alfred was King of Wessex from 871 and was the founder of the modern English nation. Up until the time of Alfred, the island of Great Britain was divided between different warring kingdoms. However, during his reign, Viking invaders from Denmark, frequently landed on British soil causing much damage, fear and loss of life.

“I desired to live worthily as long as I lived, and to leave after my life, to the men who should come after me, the memory of me in good works.”

At one point it looked as if the Danes would completely conquer Britain, King Alfred was forced to retreat from the invaders to the impassable marshes of Somerset. However, King Alfred marshalled the troops and led a swift and decisive counter-attack which defeated the Viking invaders. This not only relieved the perilous situation but gave a new found confidence in Alfred and his commitment to a united Britain. In the future, Alfred was keen to promote proper naval and land defences, which weakened the effectiveness of future Viking invasions.

Unusually for a King of that time, Alfred was interested in education and he personally translated several Latin works into English. Many regarded him as the greatest Western European ruler since Charlemagne.

“Very often it has come to my mind what men of learning there were formerly throughout England, both in religious and secular orders; and how there were happy times then throughout England; and how the kings, who had authority over this people, obeyed God and his messengers; and how they not only maintained their peace, morality and authority at home but also extended their territory outside; and how they succeeded both in warfare and in wisdom; and also how eager were the religious orders both in teaching and in learning as well as in all the holy services which it was their duty to perform for God…”

As well as defeating the Danes, Alfred forged closer links with Mercia and Wales. This is why he is often regarded as the founder of the British nation. It was Alfred, more than anyone else who had a vision of a united Britain. He also sought to reform some customs like blood feuding, which he viewed as a very primitive form of justice.

The White Horse King: The Life of Alfred the Great

The White Horse King: The Life of Alfred the Great at Amazon