Ferdinand Magellan was a Portuguese sailor who, from 1519 to 1522, led the first circumnavigation of the world. He was a skilled sailor who wished to discover new routes to reach India. Appointed by the King of Spain, he was given permission to seek India by sailing around the southern point of America. He successfully led the mission through many turbulent experiences. In doing so, he made notable firsts.

Magellan was killed during the Battle of Mactan in the Philippines in 1521 when natives resisted the Spanish attempts to bring Christianity and colonialism to the island.

“Most versed in nautical charts, he knew better than any other the true art of navigation, of which it is certain proof that he by his genius, and his intrepidity, without anyone having given him the example, how to attempt the circuit of the globe which he had almost completed… The glory of Magellan will survive him.”

Antonio Pigafetta – Chronicler of the expedition to circumnavigate the world.

Magellan was born in Sabrosa, Portugal around 1480. His parents were Rui de Magalhães and Alda de Mesquita, members of the Portuguese nobility. Aged 25, he sailed as part of the Portuguese fleet to India. Portugal had recently been the first European power to reach India – following the path-finding voyage of Vasco de Gama. Magellan stayed eight years in Portugal, taking part in the development of the Portuguese colonies in Goa and Quilon. The aggressive nature of Portuguese colonialism led to frequent conflict and Magellan fought in several battles. In 1511, he participated in the conquest of Malacca in Malaysia, where he became rich with plunder. He also learnt about the ‘Spice islands’ – modern-day Indonesia, which was reported to be rich with spices like cloves, nutmeg and mace.

In then spent time in Morocco, where he was accused of trading with the Moors (not proven). In Morocco he was also injured in battle, leaving him with a permanent limp. Magellan then returned to Portugal where he fell out of favour with the Portuguese king. However, Magellan became fascinated at the possibility of reaching the Spice Islands by sailing west – to find a way from the Atlantic Ocean to the Pacific Ocean and avoid the more treacherous waters by the Cape of Good Hope in South Africa. He studied the latest charts and maps with a cosmographer (map specialist) Rui Faleiro. This gave him the hope that they could sail west and reach the Spice Islands. He presented his plans to King Manuel of Portugal but he was rebuffed, so he approached the Spanish King Charles I. Magellan offered the king a potential trade route to the Spice Islands that Spain could profit from – and avoid the need to take the Portuguese route around Africa. Despite it never being accomplished before and a real step into the unknown, Charles I agreed – motivated by hopes for profitable trade and also to increase the prestige of Spain and catch up with their Portuguese neighbours.

The expedition set sail on 20 September with five ships. They sailed west to South America, reaching Rio De Janeiro. They then tentatively sailed south, looking for access to the Pacific Ocean. As winter set in, they were forced to take shelter and halt their sailing. Dissatisfaction amongst his men grew due to the fears and uncertainties of finding this unchartered route. It also didn’t help that Magellan was Portuguese and most of the men were Spanish. It led to full-scale mutiny, and Magellan could only just quell the protests.

It took until October of 1520 for the expedition to finally find the way through to the Pacific at nearly South America’s southernmost tips – a straight now known as the Strait of Magellan. It is a little further north than the southernmost tip (Tierra del Fuego island), and the straight is safer than the Drake Passage (to the south) which separates Chile from Antarctica. However, it was still a difficult passage, and one ship turned back and sailed east back to Spain. This ship would return to Spain on 6 May 1521 and, to avoid being tried for desertion, they accused Magellan of having being disloyal to the king.

The expedition then took three months to sail west across the Pacific until it reached the Philippines. Thirty men died from scurvy and food and drink became almost exhausted. Supplies were so low; they resorted to eating rats and sawdust. This, in itself was another remarkable first. The first expedition to cross the Pacific Ocean.

In the Philippines Magellan sought to convert the local population to Christianity and he met with a degree of success. However, one island Mactan resisted fiercely and, in a battle on 27 April 1521 between the sailors and locals, Magellan was killed in a bloody battle. His body was never recovered and was severely mutilated.

“When the natives saw that, they all hurled themselves upon him. One of them wounded him on the left leg with a large cutlass, which resembles a scimitar, only being larger. That caused the captain to fall face downward, when immediately they rushed upon him with iron and bamboo spears and with their cutlasses, until they killed our mirror, our light, our comfort, and our true guide. When they wounded him, he turned back many times to see whether we were all in the boats. Thereupon, beholding him dead, we, wounded, retreated, as best we could, to the boats, which were already pulling off.”

Laden with spices, the remaining sailors set out for Spain by continuing the western route. By that time only one ship remained seaworthy – ‘The Victoria’ which was captained by Juan Sebastian Elcano. On 6 September 1522 – nearly three years after first setting sail on the western circumnavigation, the Victoria finally returned to Spain. It had covered a total of 42,000 miles. Only 18 out of the original 270 men survived to return to Spain – a ratio of 6%.

The survivors gave an unflattering account of Magellan’s captaincy – the success of making the first circumnavigation of the globe was lost after a very high casualty rate and widespread discontent throughout the perilous journey. The captain Elcano had participated in the mutiny and gave an unflattering account of Magellan to Charles I. In his absence, Magellan’s wife and daughter had died. In his native Portugal, he reviled for sailing with the Spanish so he received no critical acclaim.

However, one survivor remained loyal to Magellan – Antonio Pigafetta – the expedition’s chronicler. He wrote effusively about Magellan and distributed written accounts to influential people throughout Europe. He wrote:

“Magellan’s main virtues were courage and perseverance, in even the most difficult situations; for example he bore hunger and fatigue better than all the rest of us. He was a magnificent practical seaman, who understood navigation better than all his pilots. The best proof of his genius is that he circumnavigated the world, none having preceded him.”

Pigafetta’s account helped to counter the misinformation about the voyage, and slowly the reputation of Magellan and the pioneering journey rose. The skill and determination of Magellan also rose after future expeditions failed to repeat the journey. It took 58 years until Sir Francis Drake managed to circumnavigate the world in 1580.

To put the first circumnavigation of the world in context – at the time, there was widespread disbelief that the world was round. Many still believed the world was flat, and there was little evidence to confirm either way. Magellan’s expedition was of importance in illustrating the nature of the world and also opening up possibilities for future sailors. It was a key moment in the Age of Discovery. A quote attributed to Magellan is:

“The church says the earth is flat; but I have seen its shadow on the moon, and I have more confidence even in a shadow than in the church.”

The Last Crusade: The Epic Voyages of Vasco da Gama 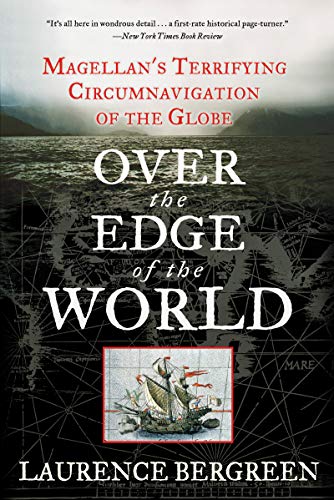 The Last Crusade: The Epic Voyages of Vasco da Gama by Laurence Bergreen at Amazon.