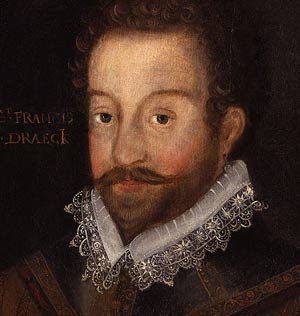 There were rumours of a love interest between Sir Francis Drake and Queen Elizabeth, but this is hard to quantify. Queen Elizabeth I did appreciate the many jewels and riches he brought back from his plunder of Spanish shipping (even if Queen Elizabeth I sometimes rebuked him for political reasons)

His most famous feat occurred when he was second in command of the English fleet – which defeated the Spanish Armada in 1588. A traditional tale says he was playing bowls when the Spanish fleet were first noticed. Sir Francis Drake is claimed to have said:

‘there’s still time to finish the game and defeat the Spanish.’

However, this remains unsourced. A sourced quote shows Drake’s assessment of the Spanish fleet, as the Armada approached.

“Coming up unto them, there has passed some cannon shot between some of our fleet and some of them, and so far as we perceive they are determined to sell their lives with blows. … This letter honorable good Lord, is sent in haste. The fleet of Spaniards is somewhat above a hundred sails, many great ships; but truly, I think not half of them men-of-war. Haste.”

Sir Francis Drake also helped to commercialise the slave trade. He accompanied his cousin Sir John Hawkins in the third British Slave trading expeditions. He was also present at the Rathlin Island Massacre, where 600 people were massacred after surrendering in Ulster.

He died of dysentery in January 1596 after unsuccessfully attacking San Juan, Puerto Rico.