Ludwig van Beethoven (1770 – 1827) is one of the most widely respected composers of classical music. He played a crucial role in the transition from classical to romantic music and is considered one of the greatest composers of all time.

“Music is … A higher revelation than all Wisdom and Philosophy”

Beethoven was born 16 December 1770 in Bonn (now part of Germany) From an early age, Beethoven was introduced to music. His first teacher was his father who was also very strict. Beethoven was frequently beaten for his failure to practise correctly. Once his mother protested at his father’s violent beatings, but she was beaten too. It is said, Beethoven resolved to become a great pianist so his mother would never be beaten.

Beethoven’s talent as a piano virtuoso was recognised by Count Ferdinand Ernst Gabriel von Waldstein. He sponsored the young Beethoven and this enabled him to travel to Vienna, where Mozart resided. It was hoped Beethoven would be able to learn under the great Wolfgang Amadeus Mozart, but it is not clear whether the two ever met. Mozart was to die shortly, but Beethoven was able to spend time with the great composer Joseph Haydn, who taught him many things.

Rather than working for the church, Beethoven relied on private donations from various benefactors. However, while many loved his music, they were often not forthcoming with donations and Beethoven sometimes struggled to raise enough finance. He complained about the way artists like him were treated.

“One clashes with stupidity of all kinds. And then how much money must be spent in advance! The way in which artists are treated is really scandalous… Believe me, there is nothing to be done for artists in times like these.” – Beethoven

His situation was made more difficult by his mother’s early death and his father’s descent into alcoholism; this led to Beethoven being responsible for his two brothers.

Beethoven was widely regarded as a great musician, though his habits were unconventional for the social circles which he moved in. He was untidy, clumsy and (by all accounts) ugly. All attempts to make Beethoven behave failed. On one occasion, Beethoven pushed his way up to the Archduke saying it was impossible for him to follow the many rules of social behaviour. The Archduke smiled and said – ‘we will have to accept Beethoven as he is.’ Beethoven himself had great faith in his own capacities, referring to the princes at court.

“There are and always will be thousands of princes, but there is only one Beethoven!”

Beethoven’s music was also unconventional, he explored new ideas and left behind the old conventions on style and form. His freer and explorative musical ideas caused estrangement with his more classical teachers like Haydn and Salieri.

From his early 20s, Beethoven experienced a slow deterioration in his hearing, which eventually left him completely deaf.

“Music is the mediator between the spiritual and the sensual life.”

Yet, despite his deafness and the frustration this caused him, Beethoven was still able to compose music of the highest quality. He was still able to inwardly hear the most sublime music. However, his deafness meant he struggled to perform with an orchestral backing, as he often fell out of time. This caused the great pianist to be ridiculed by the public, causing much distress. As a result, he retreated more into his private world of composition. Despite these later difficulties, his most widely admired works were composed in this difficult last 15 years. This included the great works Missa Solemnis and the Ninth Symphony – both finished shortly before his death. The Ninth Symphony was groundbreaking in creating a choral symphony from different voices singing separate lines to create a common symphony. The final part of the symphony (often referred to as “Ode to Joy”) is a symbolic musical representation of universal brotherhood. It was a fitting climax to Beethoven’s unique musical creativity and life. Beethoven considered music as one of the greatest contributors to a higher philosophy.

Beethoven was also a supporter of the Enlightenment movement sweeping Europe. He was going to dedicate a great symphony to Napoléon, whom Beethoven believed was going to defend the ideals of the French Republic. However, when Napoléon’s imperial ambitions were made known, Beethoven scratched out his name so powerfully, he tore a hole in the paper.

Beethoven was born and raised a Catholic. His mother was a devout Catholic and sought to share her religious views with her children. Beethoven was considered a fairly moral person, he recommended the virtues of religion to those around him and encouraged his nephew to attend mass.

“Recommend to your children virtues, that alone can make them happy, not gold.”

In his mid-life, his deafness and stomach pains created something of a spiritual crisis in Beethoven. He stopped attending Mass regularly and looked to a wider source of spiritual inspiration. One of his favourite works was Reflections on the Works of God and His Providence Throughout All Nature by a Lutheran Pastor which praised the ‘romantic’ view of the value of nature. Beethoven also became interested in Hindu religious texts and expressed belief in a Supreme Being in a language which was not overtly Catholic. Beethoven wrote

” O God! – you have no threefold being and are independent of everything, you are the true, eternal, blessed, unchangeable light of all time and space.” – Beethoven’s Letters with explanatory notes by Dr. A.C. Kalischer (trans. J.S. Shedlock), 1926.

Beethoven never formally left the Catholic Church, but some identify him more the tradition of Theists – those who believe in God but don’t follow a particular religion. Others suggest that Beethoven remained a Catholic, but he just redefined Catholicism in a more liberal understanding to accommodate the current enlightenment thinking and his own spiritual exploration of music. In terms of music, he did compose specific religious music such as Missa Solemnis – the great choral symphony. When asked whether he thought this work was intended for church or the concert hall, Beethoven replied that such a distinction was not so important.

“My chief aim was to awaken and permanently instill religious feelings not only into the singers but also into the listeners.” (link)


Some of Beethoven’s most memorable musical gifts include:

For the last few months of his life, Beethoven was confined to his bed with illness. Amongst his last view visitors was the younger composer Franz Schubert, who had been deeply inspired by Beethoven. Beethoven, in return, expressed great admiration for the works of Schubert and said of him “Schubert has my soul.” Beethoven’s last words were reported to be:

“Plaudite, amici, comedia finita est. (Applaud, my friends, the comedy is over.) and Ich werde im Himmel hören! (I will hear in heaven!)”

He died on 26 March 1827, aged 56. The precise cause of death is uncertain, but, he had significant liver damage – due to either the accumulation of lead poisoning or excess alcohol consumption. Over 20,000 people are said to have lined the streets of Vienna for his funeral. Though Beethoven had a difficult temperament, and although his music was sometimes too visionary for the general public, Beethoven was deeply appreciated for his unique contribution to music. 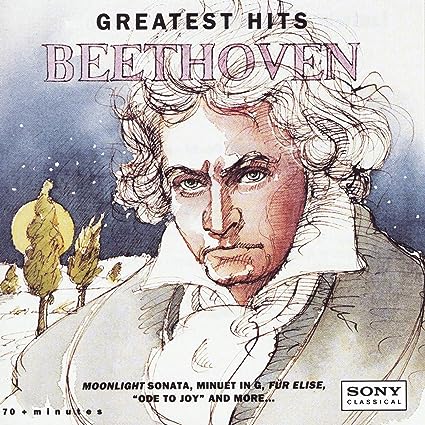 Beethoven: The Man Revealed at Amazon

Famous Classical Composers – A list of famous and influential composers throughout history, including the greatest composers, such as Bach, Mozart, and Schubert.