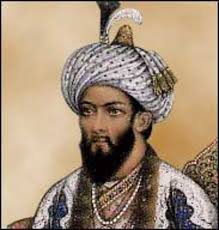 Babur (1483 – 1530) was the founder of the Moghul Empire in India. He was a descendant of Genghis Khan and Timur, but, sought to establish a more lasting civilisation based on religious tolerance and promotion of the arts.

Babur was born in Farghana in Turkestan. At the age of 12, he became ruler, following the death of his father. However, he was soon usurped by his uncles.

In his early life, Babur had to fight many battles against his enemies and was frequently struggling to rule over a territory. He moved to Afghanistan and then to India. It was in India where he was able to cement his domination, laying the foundations for the modern Moghul rule of India.

For its time it was relatively enlightened, Babur, sought to make peace with his former enemies. He allowed people to continue with their Hindu religion and customs. Babur promoted the arts and was instrumental in bringing Persian culture into India.

Babur’s son was Humayun. Babur’s Grandson was Akbar the Great.