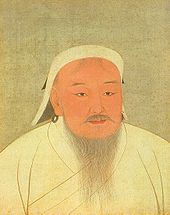 Genghis Khan (1164 – 1227) was a fierce and brilliant military commander, who achieved unprecedented success in setting up an Empire which stretched across Europe and Asia. His Mongol armies left a trail of fear, death and destruction. But, he also created a vibrant empire with a common language, booming trade, tolerance of religion and some basic customs and laws.

The young Temujin was born the son of a local tribal leader – sometime between 1163 and 1167. This was a period of turbulence, intermittent warfare and internecine conflict. At a young age, Temujin’s father was murdered by rival tribesman; this left Temujin powerless and captive to his rival tribes. However, through great skill, cunning, good fortune and tenacity, Temujin escaped and gained a reputation as a fearsome warrior and leader of men. He gathered together a band of men who were to become very loyal to him.

At the age of 16, he married his childhood bride Borte, whom he had great admiration for. Shortly after the marriage, Borte was kidnapped, but Temujin was able to call on some friends to lead a rescue operation. This was successful, and although Borte was found to be with child, Temujin would bring up the child as if it was his.

In 1206 his growing power and influence led to a council of Moghul tribesmen meeting to declare Temujin as ‘Genghis Khan – meaning ‘Oceanic Ruler of the Universe.’

With the backing of the three strongest tribes, Genghis Khan was able to unify the various Mongol tribes into one of the most impressive war machines ever assembled. It was this loyalty and unity that was so rare in that era.

Genghis Khan had a tremendous ambition to conquer and plunder loot. He first turned his attention to the powerful Chinese empire. He was successful in capturing their city and gaining the obeisance of the Chinese. This allowed him to turn his attention to the West and Genghis Khan led his Mongol armies west – deep into the heart of Europe – spreading fear and destruction.

“The Greatest happiness is to scatter your enemy, to drive him before you, to see his cities reduced to ashes, to see those who live him shrouded in tears, and to gather into your bosom his wives and daughters.”

Genghis Khan did not just look to kill people; he was mainly interested in conquering and gaining wealth. He would accept the surrender of a defeated enemy and often used consummate skill to avoid conflict merely through emissaries who would spread tales of fear and the impending force of Genghis Khan’s war machine.

Genghis Khan could show great loyalty to those who were loyal to him, and equally, he could turn on those he considered to be disloyal or resisted. For example, his three-year campaign in Khwarazm was particularly brutal as he took revenge on civilians in the area.

Genghis Khan also encouraged trade and commerce within his realm. He forbade his troops to attack merchants, and through his control of the main trading routes, trade and culture flourished as people could travel within the Mongol Empire stretching from China in the East to the Black Sea in the East. Genghis Khan was also tolerant of religions and exempted priests from paying tax.

Ironically, he died after falling from a horse in 1226.

It is estimated that 8% of Asians can have their DNA traced back to Genghis Khan.

His grandson Kublai Khan completed the conquest of China, but after his death, the Moghul empire started to break up amongst different factions.

Genghis Khan and the Making of the Modern World