David Livingstone (1813-1872) was an explorer, missionary, and anti-slavery campaigner. He became a great hero of the Victorian era for his epic discoveries in the heart of unexplored Africa. He spent the last six years of his life almost cut off from the outside world, refusing to leave his beloved Africa. 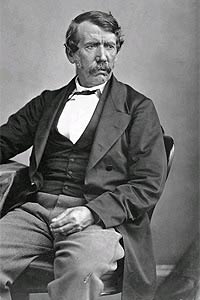 David Livingstone was born on 21 March 1813, in the mill town of Blantyre, Lanarkshire, Scotland. His father was a committed Protestant Sunday school teacher, who took a literal interpretation of the Bible. His father’s religious influence played a key role in influencing the young David, and he grew up with an aspiration to become a missionary himself.

From an early age, David was fascinated with geology, science and the natural world. Due to his father’s influence, he worried that science might conflict with religion. However, after reading Thomas Dick’s ‘Philosophy of a Future State’, David was able to reconcile religion with science.

Due to his family’s poverty, David had to work long hours in a local cotton mill from the age of 10 to 26. Despite the long hours, he found time to study after work. His work in the mills imbued him with a classic Protestant work ethic; this experience left him with respect and empathy for workers and worker-slaves.

In 1836, he entered Anderson’s College in Glasgow to train as a medical missionary. Due to the outbreak of war in China, it was suggested Livingstone travel to Africa to work as a missionary there.

Livingstone enthusiastically travelled to Africa where he strengthened his ideals of becoming a Christian missionary, searching for a greater scientific discovery, improved commerce and the abolition of slavery.

“Cannot the love of Christ carry the missionary where the slave-trade carries the trader? I shall open up a path to the interior or perish.”

However, in Africa, he realised the difficulty of making converts to Christianity. During the 1840s he gained only one real convert to Christianity. He also narrowly survived death after being mauled by a lion. In 1845 he married Dr Robert Moffat’s eldest daughter, Mary. Although Mary had lived in Africa since she was four, she did not share her husbands interest in exploration. Although they had six children, David spent little time with his family, especially towards the end of his life. His wife Mary came to suffer from alcoholism, and David admitted one regret he had was that he didn’t spend more time with his family.

After this initial period, David Livingstone increasingly turned his attention to the exploration of the African continent which was largely unexplored by Westerners. Of particular note was his discovery (the first by a Westerner) of the great waterfall Mosi-oa-Tunya (“the smoke that thunders”) waterfall. Livingstone renamed it Victoria falls in honour of Queen Victoria. In 1854-56 he made the first successful transcontinental journey across Africa from Luanda on the Atlantic to Quelimane on the Indian ocean.

Livingstone had great success as an explorer partly because of his ability to get on with local tribal chiefs. He travelled lightly without soldiers, and this non-confrontational approach made it easier for him to be welcomed. He also had an ability to empathise with African locals and Livingstone was generally warmly remembered by native Africans – helping to improve relations between Britain and native Africans. On these expeditions, he also toned down his Christian evangelism. He preached a Christian message but did not force tribal chiefs to accept it, like some of his contemporaries. However, although he had good qualities in endearing himself to locals, he was less praised by fellow members of his own expeditions. He was often criticised for his poor leadership and judgement – being subject to different moods and intolerant of criticism. His fellow physician John Kirk said of Livingstone:

“I can come to no other conclusion than that Dr. Livingstone is out of his mind and a most unsafe leader”

However, other members of Livingstone’s servants later expressed admiration for the steely determination of Livingstone in the face of difficulty and illness.

At the end of the 1850s, he resigned from the London Missionary Society to devote more time to exploration. He received a commission from the Royal Geographic Society and this helped fund an exploration of the River Zambezi. This exploration encountered many difficulties and was perceived to be a failure by many.

In 1866, Livingstone returned to Africa for a mission to discover the source of the Nile. He never quite attained this goal but helped to fill in details about the Great Lakes of Lake Tanganyika and Lake Mweru. Livingstone also helped identify Lake Malawi and Lake Ngami. Unfortunately, on this expedition, he again lost helpers due to illness or desertion. He also had supplies stolen. This ironically required him to depend on the help of slave traders, which annoyed him.

After suffering a variety of tropical illness’ throughout his life, Livingstone died of dysentery on 1 May 1872, aged 59. He passed away knelt in prayer. His loyal local African attendants Chuma, Suza Mniasere and Vchopere were somewhat reluctant to give up Livingstone. In the end, they cut out his heart and buried it at a special memorial at the village of Ilala near the edge of the Bangweulu Swamps in Zambia. His body was then taken to the coast where it was put on a ship to England and buried in Westminster Abbey.

“You can have his body, but his heart belongs in Africa!”

One year before his death, Livingstone was met by a correspondent from the New York Herald, Henry Morton Stanley. Livingstone had been lost in the heart of Africa for six years – his letters rarely getting through. It is said that Stanley famously found Livingstone in the town Ujiji on the shores of Lake Tanganyika on 27th October 1871. He greeted Livingstone with the famous refrain.

Livingstone is said to have replied with.

“Yes, and I feel thankful that I am here to welcome you.”

One of Livingstone’s greatest achievements was to stir up public support against slavery with his writings, books (such as best-selling ‘Missionary Travels and Researches in South Africa’ (1857)

“And if my disclosures regarding the terrible Ujijian slavery should lead to the suppression of the East Coast slave trade, I shall regard that as a greater matter by far than the discovery of all the Nile sources together.”

— Livingstone in a letter to the editor of the New York Herald.[17]