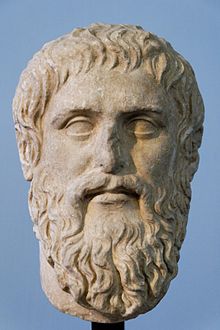 Plato (423 BC – 348 BC) was a Classical Greek philosopher, mathematician, student of Socrates, writer of philosophical dialogues, and founder of the Academy in Athens – the first institution of higher learning in the Western world. Along with his mentor, Socrates, and his student, Aristotle, Plato helped to lay the foundations of Western philosophy and science. Plato influenced a whole range of subjects from philosophy to maths, logic and ethics.

The early life of Plato is only partially recorded, but he was born in an aristocratic family in Athens. This enabled him to gain a good education, where he soon impressed those around him with his speed of learning and clarity of thought.

It is only through Plato, that we get a clear idea of Socrates’ philosophy and way of life. In ‘Apology of Socrates‘, Plato writes an account of Socrates defending himself in a trial which ultimately led to his own death.

However, Plato was not merely transcribing the words of Socrates; he was also using his own interpretations and ideas to those which he learned from him.

Plato wrote on a whole range of topics, but it is his ethics and general philosophy which seemed to be his biggest interest. Plato wrote that he saw a distinction between the body (corporeal world) and the soul. He also saw a distinction between the imperfection of the material world and the highest ideals which transcend material imperfections. Plato felt that someone of a ‘philosophic mind’ could differentiate between outward limitations and the highest ideals of beauty, truth, unity and justice. It is a philosophy which hints at the limitations of the material and mental world and encourages an aspiration to higher ideals.

He also mentions that the life we live is based on previous choices in either this incarnation of the soul or previous incarnations. Plato’s philosophy was also heavily influenced by Pythagoras, especially his religious views on transmigration.

In Politics, Plato developed the idea of a ‘Philosopher King’ someone who would be a wisdom lover and develop the necessary qualities to rule over his people with wisdom and justice. He makes the analogy to a ship’s captain or doctor. Someone who knows best what his patient needs.

“Until philosophers rule as kings or those who are now called kings and leading men genuinely and adequately philosophise, that is, until political power and philosophy entirely coincide, while the many natures who at present pursue either one exclusively are forcibly prevented from doing so, cities will have no rest from evils,… nor, I think, will the human race.” (Republic 473c-d)

This made Plato a critic of the current Athenian system of democracy.

Plato doesn’t write treatises, but writes in an indirect way, encouraging the reader to ask questions and think for himself. There is also signs of development and changes in thought, though some of this is due to uncertainty over whether letters ascribed to Plato, were actually written by him. But, like his teacher Socrates, Plato is often happy to play the role of observer rather than a preacher.

“Be kind, for everyone you meet is fighting a harder battle.”

“Every heart sings a song, incomplete, until another heart whispers back. Those who wish to sing always find a song. At the touch of a lover, everyone becomes a poet.”

“One of the penalties of refusing to participate in politics is that you end up being governed by your inferiors.”

“I am the wisest man alive, for I know one thing, and that is that I know nothing.”

“There are three classes of men; lovers of wisdom, lovers of honor, and lovers of gain.”