Aristotle (384BC – 322BC) was a Greek philosopher, natural scientist and polymath, who made extensive studies into the world around us. He was widely regarded as the greatest of the ancient thinkers and his extensive studies and writings had a lasting impact on science, philosophy and an approach based on reason and logical thinking. Whilst many of his teachings have been superseded – for over a 1,000 years his writings formed an important basis of western and Islamic culture.

“Time crumbles things; everything grows old under the power of Time and is forgotten through the lapse of Time.”

Aristotle was born in Stagira, Macedonia (northern Greece) around 384 BC. His father, Nicomachus was a physician. After his father’s death, he travelled to Athens to join the Academy of Plato. Some sources suggest he lived quite a boisterous and wild young life, but at the same time grew into a model student of Plato. Aristotle was not only very intelligent but had a thirst for knowledge and was always searching to push the boundaries of discovery. He had an independent mind – questioning received wisdom and looking at subjects from a new angle. He deeply impressed Plato through his ability to resolve difficult questions and previously unsolvable problems.

As Aristotle studied under Plato he would have learnt about the philosophic traditions of Socrates. He not only synthesised existing philosophy but also left his own lasting contributions in the field of logical argument, epistemology and the link between potentiality and actuality. Perhaps Aristotle’s most singular contribution was the promotion of logic and rational argument, a basic tenant that he employed in all the myriad fields of his studies.

Aristotle’s wider philosophy was also based on study of the immanent world, examining observable phenomena. Whilst this may sound quite commonplace, it was a departure from many of the ancient religious beliefs, superstitions and myths which were held up to explain many things.

In addition to his metaphysical arguments, Aristotle never lost touch with reality and was a practical philosopher offering meaningful advice to readers and students on how to promote a better and more fulfilling life. He was also regarded as a kindly man, compassionate to others.

Aristotle and Alexander the Great

Alexander the Great and Aristotle

In 342 BC Aristotle returned to Macedonia to become the teacher of the future Macedonian King – Alexander the Great. Aristotle taught the future king for several years on political philosophy, history and ethics. Alexander the Great would later ignore much of Aristotle’s teachings such as the desirability of oligarchic leadership, but, his education by Aristotle must have left an abiding impression on the young prince.

“If liberty and equality, as is thought by some, are chiefly to be found in democracy, they will be best attained when all persons alike share in the government to the utmost.”

In 335 BC, Alexander ascended the throne and began his great wars of conquest. During this period, Aristotle returned to Athens, where he opened his own school – the Lyceum. Whilst Alexander did not seek his old tutor’s advice, he appears to have given Aristotle a generous fund to support the Lyceum and Aristotle’s work. However, Aristotle’s independence of thought did create tension with the powerful Alexander. Aristotle’s nephew was executed for suspected treason – perhaps as a warning shot to Aristotle himself. When Alexander died in 323 BC, Aristotle also suffered from his association with the former king, and anti-Macedonian sentiment in Athens encouraged Aristotle to flee. Bearing in mind the fate of Socrates, he didn’t want Athens ‘to sin against philosophy for a second time.’ A few months after leaving Athens, he died at the age of sixty-two. 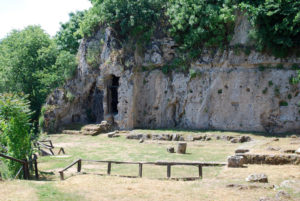 The School of Aristotle in Mieza, Greece.

Aristotle was one of the great polymaths of his time. It is estimated that Aristotle wrote around 170 books, although only 47 of these have survived to the modern-day. He made studies in botany, physics, philosophy, medicine, optics, logic, and was well known for being a powerful lecturer and debater.  Aristotle was also a playwright and he described how the weakness of man – pride, anger, jealousy, could lead to his downfall.

“Piety requires us to honor truth above our friends.”

His prolific output was helped by his own researchers and his synthesising existing knowledge. But, this in itself was an important task. Much of what we know of the ancient world comes from Aristotle. In doing so, he helped lay the foundations for western civilisation.

Aristotle made a comparison of different constitutions from different states. This in itself was groundbreaking; he sought to rationally compare different systems of government to see which was the most successful. This work informed his book Politics – which was an attempt at a practical philosophy to allow justice and freedom. He also saw politics as a method of ensuring man had the capacity to live harmoniously and allow him to pursue noble ideas.

Aristotle made mistakes and held views on slavery and women which reflected the prejudices of his time. However, he was also a visionary – leaving many memorable phrases. In the world of politics, he said: “Poverty is the parent of revolution and crime.” He was also a very early pioneer for promoting education as a way to strengthen a nation-state.

“All who have meditated on the art of governing mankind are convinced that the fate of empires depends on the education of youth.”

In the field of physics, Aristotle’s ideas influenced much of the medieval period and lasted into the European Renaissance, when his ideas were replaced by the physics of Isaac Newton. In the study of the natural world he distinguished and classified around 500 species of animal and made an early effort to offer categorisations of the living world.

Aristotle was one of the earliest thinkers to consider issues of economics. He described the function of money and debated the virtues of private property vs communal sharing. It is a debate that would come to the fore nearly two thousand years later. Whilst supporting private property, Aristotle was more critical over retail (selling of goods for profit) and the charging of interest, which he saw as making money from not doing anything productive.

Aristotle believed in the power of reason to illuminate the problems of man. He believed that man had the capacity for enlightenment through self-inquiry and study. He believed that human goodness derived from rational thought. In this regard, he had an important legacy for scientific method and rational understanding. During the medieval ages, Aristotle was seen as a primary source of knowledge and at times, there became a rigid adherence to Aristotle’s writing. The irony is that Aristotle himself was always willing to challenge conventional wisdom. Aristotle was one of the few classical philosophers who strongly influenced later Christian writers such as Thomas Aquinas. He also exerted an important influence on Islamic scholars who tried to synthesis Islam with the rationality of Aristotle.

“The life of money-making is one undertaken under compulsion, and wealth is evidently not the good we are seeking; for it is merely useful and for the sake of something else.”

“Piety requires us to honor truth above our friends.”

“The basis of a democratic state is liberty.”

“He who is unable to live in society, or who has no need because he is sufficient for himself, must be either a beast or a god.”

“If liberty and equality, as is thought by some, are chiefly to be found in democracy, they will be best attained when all persons alike share in the government to the utmost.”

“Poetry is finer and more philosophical than history; for poetry expresses the universal, and history only the particular.”

“If, then, God is always in that good state in which we sometimes are, this compels our wonder; and if in a better this compels it yet more. And God is in a better state. And life also belongs to God; for the actuality of thought is life, and God is that actuality; and God’s self-dependent actuality is life most good and eternal.”

The Basic Works of Aristotle

The Basic Works of Aristotle at Amazon