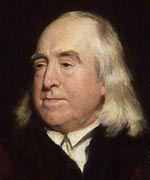 Jeremy Bentham (1748 – 1832) was a British philosopher and social reformer. He is regarded as the founder of utilitarianism – a philosophy advocating the greatest happiness of the greatest number. Bentham was a social activist arguing for the abolition of slavery and an early advocate of animal rights. He wrote numerous treatises and works arguing for equality between the sexes, legal reform, ending corporal punishment and abolishing the death penalty. Bentham played an influential role in English radicalism and liberalism of the Nineteenth Century. For his support of extending education to people of all classes and religion, he is also considered the ‘spiritual father’ of University College London (UCL).

Bentham was born in Houndsditch, London on 15 February 1748, to a wealthy Tory family. From an early age, Bentham displayed a remarkable academic precociousness. He began learning Latin, aged three and was an avid reader of history, the Classics and English Literature. He was educated at Westminster school, and Queens College, Oxford. He completed his Bachelor’s degree in 1763 (aged only 15) and finished his Master’s degree in 1766. Bentham trained as a lawyer but never practised. Jeremy Bentham was dismayed by the complexity of English legal system and became a lifelong critic of the English legal system. Throughout his life, he tried to codify the English (and American) legal systems, though his efforts did not lead to a single codification of the law.

The decision to not practise law disappointed his father, who had once hoped the young Jeremy would go onto become the Lord Chancellor of England. However, his father offered financial support to Jeremy, and his will enabled Jeremy to devote his time to writing.

Bentham was also concerned about the state of the English prison system and code for punishment. He hoped to reform the law, and to this end, designed a model prison called the Panopticon. Bentham hoped the design of this model prison would help in the efficiency of observing prisoners. As Bentham said he helped the Panopticon would be “a mill for grinding rogues honest”

Bentham was pioneering in using his ‘utilitarian’ principles for an evaluation of criminal law. Bentham felt laws and punishment should be evaluated for whether they increase human happiness. Bentham feared that corporal punishment was self-defeating and didn’t reform prisoners, but just make them more likely to resent society. Bentham became an advocate of abolishing corporal punishment, including for children – which was rare for the time.

Bentham is most famous for his interest and development of utilitarianism. It was a unique philosophy which rejected natural rights but felt morality was linked to the net increase in happiness. Bentham wrote about his own philosophy.

(the) “fundamental axiom, it is the greatest happiness of the greatest number that is the measure of right and wrong.” Bentham, Jeremy (1776).

This philosophy challenged many of the conventions of society, such as slavery, inequality of women and harsh punishment; it was a radically different way of looking at the world. Critics argued the philosophy of utilitarianism was amoral and could justify torture if it increased net happiness. However, Bentham also advocated a necessary form of justice to prevent the infringement of human rights. Bentham spent considerable time in evaluating the happiness which results from a particular decision and grading levels of happiness depending on its quality, duration and type. His philosophy of utilitarianism was later extended and modified by his student John Stuart Mill. Mill attempted to make Utilitarianism less open to criticisms of unfairness, placing greater emphasis on individual liberty.

Bentham used his basic principles of utilitarianism for a wide range of social issues. He became an early advocate for welfare economics – arguing that economic policy should be dictated with the aim of increasing the net welfare of society. This was in contrast to the laissez-faire economics dominant in that period which often led to extreme inequality and suffering. Bentham also advocated monetary expansion to achieve full employment – in direct contrast to the famous economist – David Ricardo. Bentham was in contact with the ‘father of economics’ – Adam Smith and Smith modified his views on free interest rates after receiving correspondence from Bentham.

After the American Revolution, the British government asked Bentham to write a treatise criticising the political philosophy of the American revolution; his “Short Review of the Declaration” was distributed in the American colonies. Bentham supported the ideals of the French revolution praising the decision to abolish slavery and promoting equality. Due to his support and friendship with leading revolutionaries, he was made an honorary citizen of France. However, he was severely critical of the violence which arose when the Jacobins came to power and didn’t accept the concept of natural rights.

Bentham was a leading liberal thinker, and often took views significantly ahead of his time. He advocated legal and social equality for women. He believed in universal suffrage and wrote a utilitarian justification for democracy. He wrote an essay arguing laws on homosexuality were wrong and an unnecessary infringement of people’s personal privacy – though it was not published in his lifetime. Bentham was an early thinker to argue that animals should not be made to suffer unnecessarily. Bentham argued that under the philosophy of utilitarianism, we have a duty to consider feelings of animals, as he wrote:

For Bentham that was evidence that we should not create unnecessary suffering to animals. He was a founder member of the RSPCA (Royal Society for the Prevention of Cruelty to Animals) which sought to ban dog and cock fights, common in the Nineteenth Century.

Bentham indirectly helped with the foundation of the University of London in 1826. (In 1836, it became University College London). Bentham strongly supported the ideal that education should be made more widely available – irrespective of social class, income and religion. The University of London was the first London to admit people irrespective of their religion, creed or political belief (at the time entry to Oxford and Cambridge was only open to members of the Church of England) He played little active role in its creation, but the University acknowledges his vision of education was a founding principle. Bentham left a large legacy of his voluminous writings to the University.