Anne Frank (1929-45) was a  young Jewish girl who perished in the Holocaust. During the Second World War her family were forced to hide from the Gestapo, and in the cramped conditions, she kept a diary of her experiences and thoughts. After the war, her father Otto Frank discovered her diary and, struck by her maturity and depth of feeling,  published it – originally under the title ‘Diary of A Young Girl‘ – later as “Diary of Anne Frank”. Anne Frank’s diary has become one of the most famous records of the Holocaust and has helped to give a human story behind the statistics of the Holocaust.

“It’s difficult in times like these; ideals, dreams and cherished hopes rise within us, only to be crushed by grim reality. It’s a wonder I haven’t abandoned all my ideals, they seem so absurd and impractical. Yet I cling to them because I believe, in spite of everything, that people are truly good at heart.”

Anne Frank was born on 12 June 1929 in Frankfurt am Main, Germany. Her father Otto Frank was a German businessman. In 1933, at the height of the great depression, Adolf Hitler and the NSDAP (Nazi party) rose to power Germany and began instituting antisemitic legislation. Due to the hostility to the Jews, Otto Frank took his family to the Netherlands where he set up a new business that traded in pectin – an ingredient of jam.

However, after the fall of Holland to the Nazi’s in 1940, the Jewish population experienced ever-increasingly repressive measures and she had to transfer from a public school to Jewish school. As Anne mentioned in her diary. 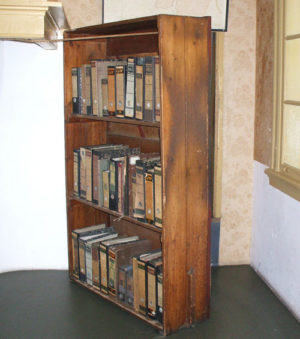 By 1942, the situation for the Jewish population in Europe was deteriorating and with her sister under threat of deportation, Otto Frank took his family into forced hiding, behind one of his business premises in the heart of Amsterdam. Her family were later joined by the Van Pels family who were also trying to avoid arrest. The Jewish families were helped by non-Jewish friends, such as Miep Gies who smuggled in food and supplies into the cramped surroundings.

Anne was thirteen when the family went into hiding and she began writing a diary about daily life in the secret annexe. She also used her diary to express her thoughts and emotions of growing up and living under the challenging circumstances. During the day, they had to be extremely quiet so as not to arouse any suspicion of those living below. It was an offence to hide Jewish people from the Gestapo and it was difficult to know who could be trusted to keep the secret.

Anne’s diary tells of the difficulties of living in a confined space with so many people. The atmosphere was at times suffocating because small irritations could get on people’s nerves and not being able to go out, there was no release or escape from the environment. They eagerly followed news of the war and by 1944 were increasingly hopeful as they heard of the Allied landings in France and liberation of Paris.

One striking feature of the diary is how she wrote about very ordinary, everyday life-experiences of a young teenager, against the backdrop of the frightening war situation. For example, she developed a short-lived romance with 16-year-old Peter van Pels, who was also hiding in the attic. With Peter, she experienced her first kiss, but also had the self-awareness to wonder whether her infatuation was genuine love or a result of the confined situation she was in. Anne wrote about all the different people and relationships within the hiding place – she was close to her father, but often felt distant from her mother

Despite the hardships and challenges of her situation, she also expressed a natural joie de vivre and positive view of life, for example

“I long to ride a bike, dance, whistle, look at the world, feel young and know that I’m free, and yet I can’t let it show. Just imagine what would happen if all eight of us were to feel sorry for ourselves or walk around with the discontent clearly visible on our faces. Where would that get us?” (December 24, 1943) – Diary of Anne Frank

Arrest and transportation to Auschwitz

Unfortunately, on 4 August 1944 (with the Allies closing in on a retreating Germany army), an anonymous source gave a tip-off to the German secret police. The families were arrested along with two helpers and they were sent on the last convoy train to Auschwitz. After surviving the selection process (most people under 15 were sent straight to the gas chambers), Anne was sent a labour camp for women. They a few months later in November 1944, she was put on a train to Bergen-Belsen concentration camp. Belsen was notorious for having terrible conditions. The prisoners were starved and mistreated by sadistic guards. In the unsanitary, overcrowded conditions, disease was rife and the death rate very high. In the final months of the war, Anne contracted typhoid fever and she died – just one or two months before the camp was liberated by the advancing Allied armies.

Except for her father Otto, all her family died in various concentration camps across Europe – a fate similar for many Jewish families. After the war, Otto returned to the place where they had hidden for two years. It was here that he found Anne’s diary and he was impressed by his daughter’s writings. Knowing she had expressed a wish to be a writer, and encouraged by friends, he decided to try and get it published. Initially, it was called Het Achterhuis (The Secret Annex) but when it was translated into England, the name was changed to “The Diary of Anne Frank”

Her diary was published in 1947 and, in the first run, 3,000 copies were printed. Following a glowing article by Jan Romein in the newspaper Het Parool, it became a best seller and was translated into 60 languages. People were fascinated by her writing and what she managed to convey in the most difficult of situations.

Her book has become an important symbol of how innocent people can suffer from intolerance and persecution.

In 1960, the family’s secret hiding place was converted into the Anne Frank Museum and is visited by thousands of people every year.

“one voice speaks for six million—the voice not of a sage or a poet but of an ordinary little girl.”

In the aftermath of the Second World War and the discovery of Nazi concentration camps, the magnitude of the horrors were difficult to comprehend. Over six million Jews perished in the holocaust, but the scale of the killing was hard to put in context. Anne Frank’s Diary was important because it gave a very human connection to the people behind the statistics. Anne’s lively and engaging writing style made it easy for readers to empathize with her situation. It also helped that the diary was a very moving and human account of experiences we can all relate to. Eleanor Roosevelt wrote of Anne Frank’s diary as.

“One of the wisest and most moving commentaries on war and its impact on human beings that I have ever read.”

The tragic discovery of their hiding place towards the end of the war, giving an added poignancy to the loss of life and potential of Anne Frank cut away before she reached adulthood.

The Diary of Anne Frank

Anne Frank: The Diary of a Young Girl at Amazon