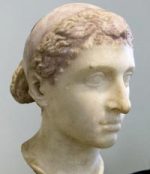 Cleopatra VII Philopator (69 BC – August 12, 30 BC) was an Egyptian Queen and the last pharaoh of Ancient Egypt. Cleopatra was a member of the Greek-speaking, Ptolemaic dynasty, who ruled Egypt from 300BC to 30 BC. Deposed from power by her brother, Cleopatra aligned herself with Julius Caesar to regain the throne. After Caesar’s murder, she became the lover to Mark Anthony. But, after Mark Anthony had been defeated by the forces of Octavian in the Roman Civil War, Anthony and Cleopatra committed suicide, rather than fall into the hands of Octavius. Her death marked the end of the Ptolemaic Kingdom of Egypt – and Egypt became absorbed into the Roman Empire. 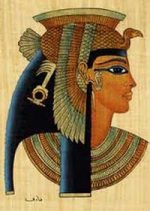 In 48 BC, the Roman Empire was embroiled in a civil war between Julius Caesar and Pompey. When Pompey fled to Alexandria, the capital of Egypt, he was murdered on the orders of Ptolemy. Ptolemy had hoped to curry favour with Caesar, but when Caesar arrived in Alexandria, he was enraged at the murder of a Roman consul by a foreign subject.

Taking advantage of Caesar’s displeasure with Ptolemy, Cleopatra sneaked into Caesar’s rooms and successfully endeared herself to Julius Caesar.  With Caesar’s military strength and support siding with Cleopatra, her brother Ptolemy was overthrown and killed. It enabled Cleopatra to be reinstalled as Queen. In 47BC, Cleopatra gave birth to Caesarion, which means “little Caesar.” though Caesar never publicly declared him to be his son.

For a time Cleopatra’s reign brought relative stability to the region, bringing a degree of peace and prosperity to a country bankrupt by civil war. Although she was brought up to speak Greek like her family, she also made an effort to learn Egyptian and later only spoke only in the native tongue of her subjects.

In 44BC, Julius Caesar was assassinated and this led to a growing power struggle between Mark Anthony and Caesar’s adopted son Octavian.

The antagonism between Mark Anthony and Octavius grew into civil war, and in 31BC, Cleopatra joined her Egyptian forces with the Roman forces of Mark Anthony and fought Octavian’s forces on the west coast of Greece.

Cleopatra and Mark Anthony were decisively beaten in battle and scarcely escaped back to Egypt. However, Octavian’s forces pursued the couple and captured Alexandria in 30BC. With no chance of escape, Mark Anthony and Cleopatra both took their own lives, committing suicide on 12 August 30BC. In one account of her death, Cleopatra committed suicide by persuading a cobra to bite her on the breast.

Octavian later had their son Caesarion strangled, ending the Cleopatra dynasty. Egypt became a province of the Roman Empire, and Cleopatra proved to be the last of the Egyptian Pharaohs.

The Mystique of Cleopatra

Many contemporary sources spoke of the mystique of Cleopatra’s beauty and allure. Her image was put on Egyptian coins, which was very rare for the historical period. Plutarch writing in the Life of Mark Antony wrote:

“For (as they say) it was not because her [Cleopatra’s] beauty in itself was so striking that it stunned the onlooker, but the inescapable impression produced by daily contact with her: the attractiveness in the persuasiveness of her talk, and the character that surrounded her conversation was stimulating. It was a pleasure to hear the sound of her voice, and she tuned her tongue like a many-stringed instrument expertly to whatever language she chose….”

She was a member of the Ptolemaic dynasty, a family of Greek origin that ruled Egypt after Alexander the Great’s death during the Hellenistic period. The Ptolemies, throughout their dynasty, spoke Greek and refused to speak Egyptian, which is the reason that Greek, as well as Egyptian languages, were used on official court documents such as the Rosetta Stone. By contrast, Cleopatra did learn to speak Egyptian and represented herself as the reincarnation of an Egyptian goddess, Isis.

Cleopatra  by Diane Stanley at Amazon