Michael Faraday (1791- 1867) was an influential British scientist who, amongst other discoveries, helped turn electricity into a property that could be easily used.

“Nothing is too wonderful to be true if it be consistent with the laws of nature, and in such things as these, experiment is the best test of such consistency.”

Faraday was born on 22 September 1791 in south London to relatively poor parents. At the age of 14, he left school and started an apprenticeship at a local bookbinder. In his spare time he was an avid reader, teaching himself many scientific concepts. Faraday was thus mostly self-taught and became one of the greatest scientists despite his rudimentary maths.

In 1812, at the age of 20, he received some tickets for a series of lectures by the eminent scientist Humphrey Davy. After the lecture, Michael sent Davy a 300-page document offering notes on the lectures. Davy was impressed and he employed Faraday as an assistant. This later led to a Fullerian Professor of Chemistry at the Royal Institution of Great Britain, a position to which he was appointed for life.

His early work centred on chemistry. He made a special study of Chlorine and new chlorides of carbon. Faraday was a great practical inventor and one of the most useful pieces of chemistry equipment he developed was an early form of the Bunsen burner. By mixing air with gas before lighting, Faraday found an easily accessible form of higher temperature. His model of the Bunsen burner was developed and is still used in laboratories around the world.

As well as being a prominent scientist, Faraday also undertook other projects related to science. For example, after a large explosion in a coal mine in County Durham 1865, he along with Charles Lyell, produced a report on the dangers of coal dust. He offered practical recommendations which, unfortunately, were not acted upon until after another coal tragedy in 1913. Faraday also investigated levels of pollution in the River Thames and in London, offering recommendations to improve the cities air and water quality. His other areas of interest included designing lighthouses and protecting ships from corrosion. 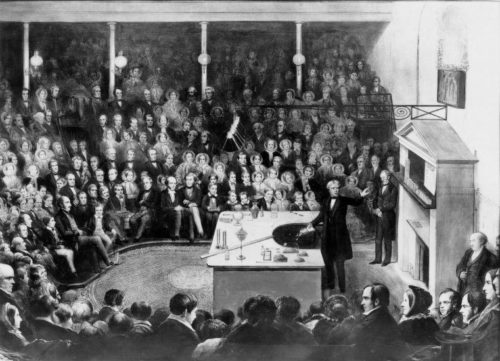 As well as being an expert scientist, Faraday had the common touch to teach science through his popular lectures. Using wit, props and humour, Faraday energised the audience with experiments, demonstrations and encouraging them to think about the significance of the scientific results they could see all around. Between 1827 and 1860 Faraday gave Christmas Lectures to a young audience at the Royal Institution in London. This tradition is continued today.

Faraday had strong religious convictions, belonging to a strict Christian sect called the Sandemanian Church – founded in the eighteenth century – an offshoot of the Church of Scotland. His religious beliefs influenced his work and he was keen to show the unity of God and nature through his scientific discoveries.

“I shall be with Christ, and that is enough.”

– Michael Faraday, on being asked about the afterlife

His religious beliefs may have been a reason why he refused the British government’s request that he develop chemical weapons for the Crimean war. He served as deacon and elder in the Sandemanian Church. Faraday married Sarah Barnard, who he met through his church, on 12 June 1821. They had no children.

In the early 1840s, Faraday’s health began to deteriorate and he began to do less research. He died on 25 August 1867 at Hampton Court, where he had been given official lodgings in recognition of his contribution to science.