Sir Alexander Fleming (6 August 1881 – 11 March 1955) was born in East Ayrshire, Scotland in 1881. He was a biologist and pharmacologist most famous for his discovery of the antibiotic substance penicillin in 1928. He was awarded a Nobel Prize, jointly with Howard Florey and Ernst Boris Chain for medicine in 1945

After four years of working in a shipping company, an inheritance gave Fleming the chance to train as a physician at St Mary’s Hospital London. From here he moved to the research department, specialising in the relatively new science of bacteriology.

During the First World War, Fleming served in the medical corps and served in the hospitals of the Western Front; during his war service, he was mentioned in dispatches.

Fleming’s greatest breakthrough occurred in 1928, when, quite by chance, he discovered an effective antibacterial agent

“When I woke up just after dawn on September 28, 1928, I certainly didn’t plan to revolutionize all medicine by discovering the world’s first antibiotic, or bacteria killer,” … “But I guess that was exactly what I did”.

Fleming had left a jar of mould unattended during his August vacation. On returning to work he noticed that a jar of Staphylococcus bacteria – a green-yellow mould – had covered the dish except one area which was clear of the bacteria – rather like a halo effect.

“One sometimes finds what one is not looking for.”

This was Fleming’s great Eureka moment – the moment he correctly deduced that some antibacterial agent had crept in and successfully stopped the bacteria. He later identified this antibacterial agent as a rare form of Penicillium notatum which had drifted in from a mycology lab nearby. He later talked about the importance of chance in this discovery.

“I have been trying to point out that in our lives chance may have an astonishing influence and, if I may offer advice to the young laboratory worker, it would be this—never neglect an extraordinary appearance or happening. It may be—usually is, in fact—a false alarm that leads to nothing, but may on the other hand be the clue provided by fate to lead you to some important advance.”

In 1929, he published his work in British Journal of Experimental Pathology. However, for the next decade, his discovery remained relatively unknown. He was not able to produce penicillin to inject rats in sufficient quantities. By 1932, he had effectively abandoned his research on penicillin.

“It is the lone worker who makes the first advance in a subject: the details may be worked out by a team, but the prime idea is due to the enterprise, thought, and perception of an individual.”

However, in 1939, a team of scientists at Oxford University began work on trying to make a large quantity of antibacterial agents. The team under Howard Florey and Dr Ernst Chain started to work using Fleming’s penicillin culture. They were able to extract the penicillin in sufficient quantities to start producing it on a commercial scale. This enabled them to start producing the world’s first antibiotics. This revolutionised medical science and helped to eradicate many bacterial infections such as pneumonia, syphilis, gonorrhoea, diphtheria, scarlet fever and many childbirth infections.

After the production of penicillin, the public wanted a key person to identify with the discovery. Florey and Chain were not too keen for a public profile so the role of Alexander Fleming was highlighted as the person who first discovered the agent. Fleming was hailed as the hero of the antibiotic generation – a discovery which helped save many millions of lives during the Second World War and after.

For his work, he was jointly awarded a Nobel prize in 1945.

He died of a heart attack in 1955 and was buried at Westminster Cathedral.

Fleming On Cultures of Penicillium

“While working with staphylococcus variants a number of culture-plates were set aside on the laboratory bench and examined from time to time. In the examinations these plates were necessarily exposed to the air and they became contaminated with various micro-organisms. It was noticed that around a large colony of a contaminating mould the staphylococcus colonies became transparent and were obviously undergoing lysis. Subcultures of this mould were made and experiments conducted with a view to ascertaining something of the properties of the bacteriolytic substance which had evidently been formed in the mould culture and which had diffused into the surrounding medium. It was found that broth in which the mould had been grown at room temperature for one or two weeks had acquired marked inhibitory, bacteriocidal and bacteriolytic properties to many of the more common pathogenic bacteria.”

— Sir Alexander Fleming – ‘On the Antibacterial Action of Cultures of a Penicillium, with Special Reference to their Use in the Isolation of B. Influenzae’, British Journal of Experimental Pathology, 1929, 10, 226.

Alexander Fleming: The Man and the Myth 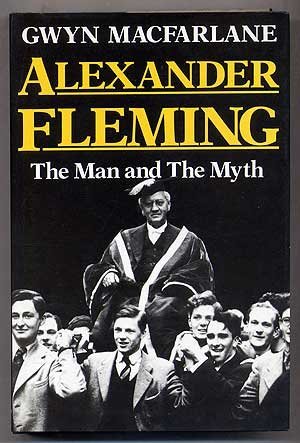