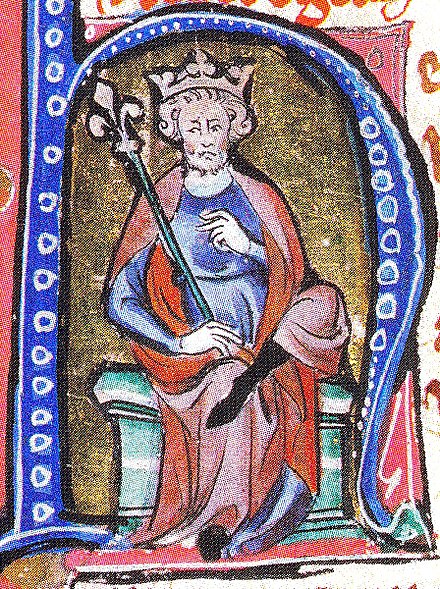 King Canute (Cnut) (995 – 1035) was king of Denmark, England and Norway, who was reputed to be a wise king, bringing a degree of order to his realms based around the North Sea. Canute was a Danish prince who also won the English throne in 1016. This united the Danish and English kingdoms and marked the waning of Viking incursions into the British Isles. King Canute was widely revered as a wise king and great supporter of the church. He was the first king of Viking descent to visit the Pope for an audience. A legend about his life states he sat by the ocean, and when the sea lapped around his throne, he pointed out to his followers that even a king of earthly power could not hold back the tides.

“Let all men know how empty and worthless is the power of kings. For there is none worthy of the name but God, whom heaven, earth and sea obey”. – King Canute

Cnut was born in Denmark to a Danish prince Sweyn Forkbeard. His great grandfather was Gorm the Old, a Viking warrior steeped in the Pagan religion. However, his grandfather (Gorm’s son) Harald adopted Christianity and made the first efforts to establish Christianity in Denmark.

In the summer of 1013, Cnut joined his father, Sweyn Forkbeard in a Viking invasion of England. They landed in Humber and gained control over England. The English king – king Ethelred escaped to Normandy in France.

In 1014, Cnut’s father died. His brother Harald was elected to the King of Denmark. The Danish in England elected Cnut to be the King of England, but the English Witan still hoped that King Æthelred would return and reclaim his crown rather than be ruled by the Vikings. On the return of Ethelred, Cnut was heavily defeated and scarce escaping he fled by boat to Denmark – but not before cutting off the noses and ears of English hostages to warn of his intent. In Denmark, Cnut raised a larger invasion force of up to 10,000 men and 200 longships to return to England. Cnut’s invasion force included allies from Poland and Sweden.

In 1015, Cnut’s made his second arrival in England – for nearly two years, there was fierce fighting between the invading Vikings and English defenders, led by Ethelred and his son Edmund Ironside. As the English struggled in the north of England,  they were hit by the defections of Eadric Streona of Mercia, a Viking king Thorkell the Tall, who previously had pledged allegiance to the English. However, despite losing in the north, and the death of Æthelred in 1016, London remained a stronghold and two Viking attacks failed to breach the wall.

However, in 2016, the superiority of Cnut’s forces caused Edmund and Cnut to meet and divide England. Cnut was to rule all England north of London, while Edmund would control London and the south. However, within a few weeks of the agreement, Edmund died leaving no obvious successor so the Saxons accepted Cnut as king of all England and was crowned at Canterbury in 1017.

On coming to power in England, Cnut, raised a tax on the English and paid off his army sending most of them home, but retaining sufficient forces to defend against sporadic Viking attacks. One substantial benefit of Cnut’s reign was bringing an end to the uncertainty, damage and loss of life caused by Viking invasions. Cnut consolidated his power by executing those in line to the Saxon throne, the sons of Edmund managed to escape to Normandy. Cnut also married (a 2nd time) Emma, the widow of Ethelred. (Emma became the only women to marry two different kings of England.

Cnut divided the kingdom into four main administrative areas and placed Scandinavians as the ruling Earls. However, over time, the Scandinavian rulers were replaced by old Anglo-Saxon nobility. Cnut had Eadric Streona killed as he was disatisfied but Cnut distrusted him for his tendency to treason. Cnut was generous towards the Christian church. He made a public conversion to Christianity before his coronation. Although he was, in the eyes of the church a sinner for having two wives (Elfgifu and Emma of Normandy), he was willing to repair and rebuild the churches and monasteries destroyed by the Viking invasions of previous years. Cnut also founded new churches and religious orders. His generosity to the church and perceived piety helped to make him popular amongst the Anglo-Saxons (despite his heavy taxes and sometimes brutal methods) The standard view of Canute was that he was a Christian by conviction and become more religious as his life went on.

“A violent, irritable temper was his most salient defect, and more than one homicide must be laid to his charge. But the fierce Viking nature was gradually and completely subdued; for Canute was a Christian by conviction and sincerely religious.”

Cnut’s made important administrative reforms including producing new coins and re-introducing laws to provide resolving of disputes over wills and inheritance. Cnut based his laws on the Anglo-Saxon king Edgar and Cnut was politically astute in often praising Anglo-Saxon kings. His strong and wise rule helped to gain allies with his English subjects. 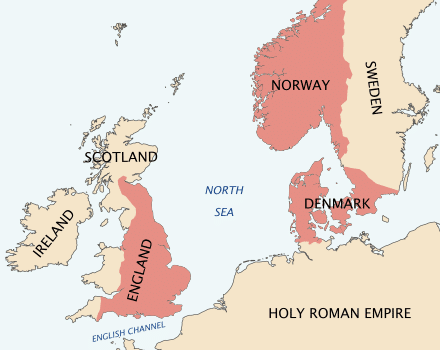 In 1019, his brother Harald II died and Cnut returned to Denmark to make his claim to both the Danish and English throne. Overcoming opposition from within Denmark, he secured both kingdoms avoiding the threat of Danish invasions of England. After his Danish claim was secure, Cnut returned to England. However, in his absence, the Norwegians and Swedes launched attacks against his Danish kingdom. Cnut returned to Denmark and proved victorious at the Battle of Helgea which made him the dominant ruler of Scandanavia.

In 1027, Cnut went on a pilgrimage to Rome. This was partly to demonstrate his devotion to Christianity and also speak with the pope to improve conditions for pilgrimages on route to Rome. The Encyclopedia Britanica, 1911, writes of King Canute.

“I spoke with the Emperor himself and the Lord Pope and the princes there about the needs of all people of my entire realm, both English and Danes, that a juster law and securer peace might be granted to them on the road to Rome and that they should not be straitened by so many barriers along the road, and harassed by unjust tolls; and the Emperor agreed.”

The successful visit to Rome further strengthened the reputation of King Canute as the favour of Rome was considered to be auspicious for a European king. Cnut was credited with reducing tolls for pilgrims going to Rome, which was an issue of major importance to Christian Europe.

The legend of Cnut and the tide 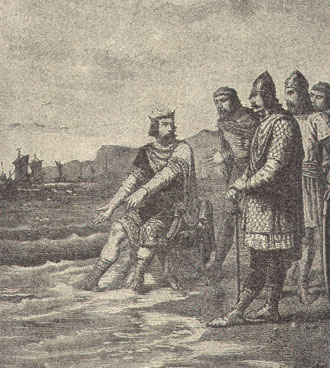 “You are subject to me, as the land on which I am sitting is mine, and no one has resisted my overlordship with impunity. I command you, therefore, not to rise on to my land, nor to presume to wet the clothing or limbs of your master.”

However, when the tides kept coming up to his throne and wet the king’s legs, Cnut said to his followers.

“‘Let all men know how empty and worthless is the power of kings, for there is none worthy of the name, but He whom heaven, earth, and sea obey by eternal laws.'”

The account shows that Cnut wished to point out how even the most powerful kings could not control outer events and the real power was the power of God. In later accounts, Cnut is referenced as knowing that the tide would keep coming but he used the analogy to make a point to his followers. One reason put forward is that as a powerful king, Canute was frequently flattered by Courtiers who wished to gain greater prominence in court. The story may be linked to efforts by Canute to reduce flattery.

Cnut died in Shaftesbury, Dorset on 12 November 1035, aged 40.  He was buried in Winchester. However, his sons and daughters were unable to build a lasting union between England and Scandinavia. By 1042, Edward the Confessor from the house of Wessex came back to the thrown, and in 1066, William the Conqueror‘s invasion of England led to England come under the influence of France.

King Canute is an important figure in European history. He marks the waning of Viking violence and evolution into a Christian Europe. Although King Canute was Danish he seems to have preferred staying in England. He made efforts to unite the English and the Danish and effectively used his warriors to stop all future Viking attacks. His sponsorship and support of religion made a big difference in promoting Christianity within England and Scandanavia. If he had lived longer, history may have looked different as he wished to strengthen the English/Scandanavian Kingdom, as it happened he died aged 40 and within 15 years, England was invaded by the Normans – ending the close link between England and Scandanavia.