Poet, writer and humanitarian, Rabindranath Tagore was the first Indian to be awarded the Nobel Prize for Literature and he played a key role in the renaissance of modern India. Tagore is most widely known for his poetry, but he was also an accomplished author of novels, short stories, plays and articles. He took an active interest in a widespread range of social, cultural and artistic endeavours. He has been described as one of the first Twentieth Century’s global man.

“So I repeat we never can have a true view of man unless we have a love for him. Civilisation must be judged and prized, not by the amount of power it has developed, but by how much it has evolved and given expression to, by its laws and institutions, the love of humanity.”

Rabindranath was born on 7 May 1861 Calcutta. His father Debendranath Tagore was a leading light in the Brahmo Samaj – a reforming Hindu organisation which sought to promote a monotheistic interpretation of the Upanishads and move away from the rigidity of Hindu Orthodoxy which they felt was holding back India. Debendranath Tagore also encouraged his family to learn English.

Rabindranath began writing from an early age and impressed with his free-flowing style and spontaneous compositions. He mostly rejected formal schooling; he spent much time being taught at home. In 1878 he travelled to England and sought to study law at University College, London, but he left before finishing the degree.

After returning to India, in 1901, Tagore moved to Shantiniketan to found an ashram which became his focal point for writing and his view on schooling. He chose the name for the ashram – Shantiniketan meaning ‘Abode of Peace.’

“Love is the ultimate meaning of everything around us. It is not a mere sentiment; it is truth; it is the joy that is at the root of all creation.”

Tagore was firm friends with Gandhi and admired him very much. But, despite this friendship, he could be critical of his views. For example, he disagreed with Gandhi’s views on Swaraj protests and upbraided Gandhi when Gandhi claimed an earthquake was ‘divine retribution for the mistreatment of Dalits in India.’ Yet despite the frequent divergence of opinions, they could admire each other. When Gandhi went on a fast unto death, it was Tagor who was able to persuade Gandhi to give up his fast and look after his health.

In 1913, Tagore was awarded the Nobel Prize for literature for his work ‘Gitanjali‘ This made his writings internationally known and his fame spread throughout the world.

“My debts are large, my failures great, my shame secret and heavy; yet I come to ask for my good, I quake in fear lest my prayer be granted.” – Gitanjali

This gave Tagore the opportunity to travel extensively giving lectures and recitals in many different countries. He also became acquainted with many of the leading cultural contemporaries of the day; this included W.B.Yeats, George Bernard Shaw, Romain Rolland, Robert Frost and Albert Einstein.

Tagore had a great love for nature and many of his poems invoke the simple beauties of the natural world. For Tagore, his religion could be found in the wonders and mysteries of nature – as much as in temples and sacred books.

Tagore was a prolific composer of music. He composed over 2,000 songs which have been popularised and sung widely across Bengal. Like his literature, he broke away from classical constraints to offer a great emotive and spiritual appeal. Tagore is unique for being the official composer for the national anthem of two countries – India’s Jana Gana Mana and Bangladesh’s Amar Shonar Bangla.

Tagore was an opponent of British imperialism, though he also felt Indians had a duty to improve their self-education; he said that British rule was partly due to the state India had fallen into. In particular, he was very denigrating about India’s obsession with caste.

‘the ultimate truth in man is not in his intellect or his possessions; it is in his illumination of mind, in his extension of sympathy across all barriers of caste and colour, in his recognition of the world, not merely as a storehouse of power, but as a habitation of man’s spirit, with its eternal music of beauty and its inner light of the divine presence.’ – Tagore, The Poet’s Religion’ in Creative Unity (1922) [1]

In 1919, Tagore returned his knighthood in protest at the Jallianwala Bagh Massacre, in which many peaceful Indian protesters were killed.

Tagore was a polymath, and towards the end of his life he took up art and also pursued an interest in science. Tagore was also very much an internationalist, criticising nationalism, though also writing songs and articles in support of the general principle of the Indian independence movement.

“Patriotism cannot be our final spiritual shelter; my refuge is humanity. I will not buy glass for the price of diamonds, and I will never allow patriotism to triumph over humanity as long as I live. “

Tagore had mixed views on religion. He was brought up in a traditional Hindu family and taught to pray and meditate from an early age. He remembers the peace of mind he developed from chanting the Gayatri Mantra, but at the same time was detached from the more formalistic aspects of religion. He tended to see religion as not scriptures and places of worship but the life we lead. As he explained:

“My religion is my life – it is growing with my growth – it has never been grafted on me from outside.” ~ Tagore to Robert Bridges, 8 July 1914.

He was keen to avoid any fanaticism and saw the strength of his own Hindu religion as its ability to see more than one path to the goal. His life-long aspiration was to see a harmony of religions flourish in India – not from mere tolerance but an appreciation of the different merits other religions had.

‘The Idea of freedom to which India aspired was based upon realization of spiritual unity…India’s great achievement, which is still stored deep within her heart, is waiting to unite within itself Hindu, Moslem, Buddhist and Christian, not by force, not by the apathy of resignation, but in the harmony of active cooperation.’ ~ Tagore in Berlin, 1921.

However, he was also critical of the Hindu caste system.

Tagore’s poetry frequently hint at a mystical view of the world.

“In this playhouse of infinite forms I have had my play, and here have I caught sight of him that is formless.” – Gitanjali

“The human soul is on its journey from the law to love, from discipline to liberation, from the moral plane to the spiritual.” Sādhanā : The Realisation of Life (1916)

Tagore died on 7th August 1941, after a long and painful illness, aged 80. He died in his family home. 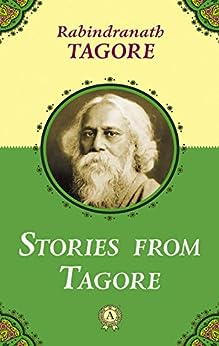 Stories From Tagore at Amazon

The Essential Tagore at Amazon