John Lennon was a British singer-songwriter and a key member of the Beatles – a musical and cultural phenomenon. After the Beatles, Lennon went on to have a distinguished solo career. Lennon was also an icon of the 1960s counter-culture revolution and was an anti-war activist.

“If someone thinks that love and peace is a cliché that must have been left behind in the Sixties, that’s his problem. Love and peace are eternal.”

John Lennon was born, October 1940, during a German air raid in Oxford Street Maternity hospital, Liverpool. During his childhood, he saw little of his father Freddie, who went AWOL whilst serving in the navy. For several years, John was brought up by his mother’s sister Mimi.

In his early years, John was a mischievous student, who would be quick to take the mickey out of teachers and other students. His school reports were often scathing. “Certainly on the road to failure … hopeless … rather a clown in class … wasting other pupils’ time.”

Whilst in his early teens he got his first guitar and would spend many hours playing. His aunt Mimi used to regularly say:

“The guitar’s all very well, John, but you’ll never make a living out of it.”

After the Beatles were famous, John presented Mimi with a silver platter with this quote written on.  He failed all his O-Levels but was still accepted to the Liverpool College of Art. However, he was expelled from College before his final year because of his disruptive behaviour.

In the late 1950s, John formed a rock group called the “Quarry Men Skiffle Band”, which was a precursor to the Beatles. In 1957, he met and formed a successful musical partnership with Paul McCartney. They complemented each other very well. Lennon focused on the more satirical aspects and McCartney veered towards the more optimistic cheerful qualities. Lennon was considered the leader of the Beatles, due to his superior age and also his musical abilities. It was, however, McCartney who persuaded Lennon to allow George Harrison to enter the band as lead guitarist.

The first concert of the Beatles was at the Cavern Club in Liverpool on 21st March 1961. After being rejected by many music labels, they eventually signed an agreement with Parlophone in 1962. George Martin who was responsible for signing the Beatles, later said he was not particularly impressed by their demo tapes, but liked their wit and humour – of which Lennon was usually at the forefront.

During the great success of the Beatles during the 1960s, John Lennon would often be seen as the figurehead for the group, although they maintained that the decisions of the group were democratic.

In 1961, the Beatles travelled to Germany, where they played many concerts in Hamburg. After two successful years, they returned to England and concentrated on recording singles. In 1963, the group’s profile took off with hit singles, such as “Please Please Me” and “She Loves You.” The popularity and enthusiasm for the Beatles were such that it led to the term “Beatlemania” being used. Lennon and the Beatles began a hectic schedule of recording, live performances and media appearances.

Despite his natural rebelliousness, Lennon agreed to the suggestion of manager Brian Epstein to dress smartly and have a similar haircut. In the early years of the Beatles, the smart-suited Beatles were part of their cultivated image.

In 1964, they released the single “I Want to Hold Your Hand” – it entered the US charts in early 1964 and soon sold over two million copies. Beatlemania was now a global phenomenon. It marked a shift in musical attitudes, especially in the US. The Beatles success of 1964, was known as the start of the “British Invasion”. In 1964, they toured the US for the first time, and in February appeared on the Ed Sullivan tv show. 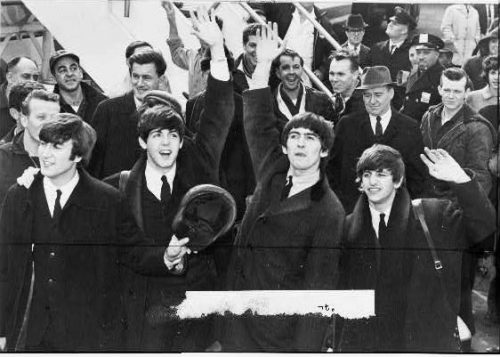 John Lennon was no stranger to controversy. In 1966, he made an off the cuff remark in an interview with the Evening Standard.

“Christianity will go. It will vanish and shrink … We’re more popular than Jesus now—I don’t know which will go first, rock and roll or Christianity.”

He claimed this was a mere observation, which was probably true in England. Nevertheless, it led to a boycott in the US, especially in the deep south. There was also a wave of record burnings – although Lennon wryly remarked that to burn them they had to buy them first.

During the 1960s, John Lennon began to frequently take LSD and by 1967 was a heavy user. This also coincided with a period of uncertainty, and he considered leaving the Beatles.  The death of Brian Epstein, their manager in 1967 also hit Lennon and the Beatles hard. However, this was also a period of musical inventiveness, with new styles of music helping to create some classic recordings, such as Sgt. Pepper’s Lonely Hearts Club Band.

In 1967, John Lennon and the Beatles became more interested in meditation and Eastern religions. They spent several weeks in the ashram of Maharishi Mahesh Yogi. Although John later broke ties with the organisation, he continued to advocate meditation.

“I’m not a god or the God, but we’re all God and we’re all potentially divine — and potentially evil. We all have everything within us and the Kingdom of Heaven is nigh and within us, and if you look hard enough you’ll see it.”

In India, they composed music for their albums The Beatles and Abbey Road. The visit also saw more Eastern musical influences begin to percolate into their music. 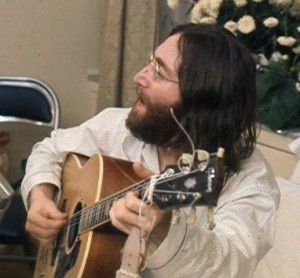 In 1969, the Beatles started to split up; Lennon was keen to branch out musically and develop his own solo career. There were also frictions over the presence of his wife, Yoko Ono in the Beatles recording sessions.  After the break-up of the Beatles, Lennon pursued a very successful solo career. His first album was released in 1970 with John Lennon/Plastic Ono Band (1970).

“It was just a gradual development over the years. Last year was “All You Need Is Love.” This year it’s “Give Peace a Chance.” Remember love. The only hope for any of us is peace…. Get out there and get peace. Think peace, live peace, and breathe peace and you’ll get it as soon as you like.” (Statement to the press,  July 1969)

In the early 1970s, John Lennon also became a figurehead for those opposed to the Vietnam War. His song “Give Peace a Chance” became an anthem for the anti-war movement. Due to his anti-war stance, the Nixon administration tried to have him deported, but after a long struggle, he was able to gain a green card in 1976. His song “Imagine” has also become a tremendously influential song; it has been voted ‘the most popular song’ by the British public.

In 1975, he retreated from the music world, preferring to spend time looking after his new son, Sean.

In October of 1980, Lennon made a return to music recording. But, just two months later on 8 December 1980, John Lennon was shot dead in Dakota, New York. He was shot by David Chapman – an obsessed fan. He later pleaded guilty to second-degree murder and was imprisoned for life.

By 2012, John Lennon has sold 14 million solo albums, whilst the Beatles have become the best-selling group of all time – with an estimated 600 million recording sales worldwide.

John Lennon: The Life at Amazon