Sir Barnes Wallis (1887-1979), was an English scientist, engineer and inventor, best known for his development of the ‘bouncing bomb’ used in the destruction of the Ruhr dams during the ‘dam busters raid’ of the Second World War.

Barnes Wallis was born in Ripley, Derbyshire. He left school aged 17 to work at an engineering works at Blackheath, London. In 1913, he took up an opportunity to work for the newly formed aircraft design department at Vickers. In 1913, aircraft design was in its infancy, but the First World War increased the importance attached to the development of aircraft technology. Barnes enjoyed his work and in 1922, took an external degree in engineering via the University of London’s external programme.

Barnes Wallis played a key role in developing the airships of the 1920s and early 1930s. He designed a geodesic design in the Vicker’s R100 airship. Airship development was abandoned after the Hindenburg disaster, but his geodesic airframe was adapted for conventional planes. The structure gave pilots a better chance of returning home, even after experiencing a direct hit from anti-aircraft fire.

With the onset of the Second World War, Barnes sought for ways to develop strategic bombing to enable the allies to take the war effort to Germany. His first idea was a ten-tonne super bomb, which would have required a more powerful plane – The Victory Bomber to be able to carry it; this plan never came to fruition. But, in 1942, he began work on a surface torpedo bomb which would enable the destruction of dams protected from conventional weapons.

In 1943, the allies were under pressure from the Soviet Union to open a second front against Germany. However, at the time, Britain didn’t feel ready to invade mainland Europe. Therefore, a high priority was placed on strategic bombing as a way of attacking the enemy and showing Stalin they were serious in defeating Germany.

However, despite the high priority of bombing from the air, Wallis had great difficulty getting his ideas accepted by the military command. To be fair, High Command was presented with many ambitious ideas, which often lacked practicality. Also, Walli’s idea was quite unique. Wallis had designed a bomb that was intended to bounce along the water for a certain distance before hitting the target and then sinking down to explode near the base.

Despite numerous rejections, Wallis had great faith in his design. He worked around the clock to develop prototypes. He even started by bouncing marbles in a swimming pool in his back garden. Eventually, after speaking directly to Bomber Harris, Wallis was given the go-ahead to develop a bomb, and a date for a potential attack was set for May 1943. This gave Wallis little time to develop a working model which could be used by pilots.

To his great disappointment, his first real bombs failed to bounce and explode on impact. This required more modifications to the bombs and also a request that the pilots fly at an even lower height. Wallis managed to make the new bombs just in time; and in May 1943, his bombs were successfully used in ‘Operation Chastise’ – attacking the Mohne, Eder and Sorpre dams in the Ruhr area. 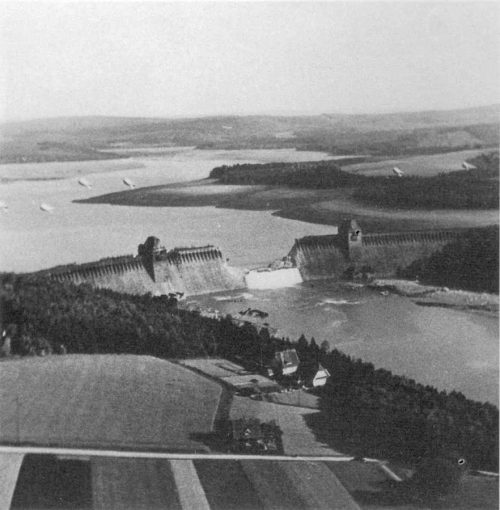 Though the military benefit of the attacks was less than initial perceptions, it was a great morale boost, and the images of devastation were used by Churchill next time he met with Stalin. The project was later made famous in the 1954 film The Dam Busters – with Michael Redgrave playing Barnes Wallis. Although the project was considered a success, at least regarding morale, Wallis regretted the high casualty rate of the aircrew. After the ‘Dambusters’ raid, Wallis placed greater stress on trying to minimise the risk posed by aircrew. After the war, Barnes was awarded £10,000 from the Royal Commission on Awards to Inventors. He gave the entire sum to the Christ’s Hospital School, which specialised in nursing injured RAF personnel.

After the Dam Busters raid, Wallis worked on deep penetration earthquake bombs, such as the Tallboy and Grandslam (10 tonnes) which were used on German V2 rocket launch pads and U-Boat pens.  After the Second World War, he worked on various defence projects until his retirement in 1971. He was an advocate of nuclear-powered submarines as a means to maintain Britain’s naval power. He was knighted in 1968.

He married his cousin-in-law Molly Bloxam in April 1925. They remained married for 54 years until his death in 1979. From 1930, the family resided in 1930 lived in Effingham, Surrey. They had four children.