Marcus Aurelius (121 – 180) was a Roman Emperor from 161 to 180. He is considered one of the five good Emperors and the last Emperor of the period known as Pax Romana – the age of relative peace in the Roman Empire. He is best remembered for his Meditations – which is an exposition of Stoic philosophy. It includes advice on how to live purposefully and harmoniously within the vaster universe. It also reminds us that death is ever-present, and we are put a small part of the greater universe. Although Emperor, Marcus wished to avoid the dictatorial tendencies of a Caesar, and he is often held up as a wise and just ruler.

“The universe is change; our life is what our thoughts make it.”

Marcus Aurelius was born in Rome on 26 April 121. He was born in a powerful and wealthy Roman family which had consolidated its political power. Emperor Hadrian chose his uncle Aurelius Antonius to be the next emperor, and Antonius ruled (138-161). Antonius, in turn, chose two young men to succeed him. One was Lucius Verus, and the other one was Marcus Aurelius.

Marcus was given a long education and studied Latin and Greek grammar under his strict teacher Fronto. He found his greatest interest was in studying Greek Stoic philosophy. He especially admired the philosophy of Epictetus a former slave and leading exponent of stoic philosophy. His philosophy encouraged simplicity, self-discipline, endurance and duty. This philosophy had a marked impact on Marcus Aurelius character and actions; it was in contrast to the excesses of many Roman emperors such as Nero.

“Look well into yourself; there is a source of strength which will always spring up whenever you look there.”

Marcuys also gained a practical political apprenticeship under Emperor Antonius, and in 145 he married Annia Galeria Faustina who was the daughter of the Emperor. After this, Antonius brought Marcus closely into his circle of advisers and he became well acquainted with the decisions and plans of the Emperor. Marcus rose in political prominence; he served as consul three times – in 140, 145 and 161. In 147, he was given tribunician power and authority over the army and provinces of the emperor. 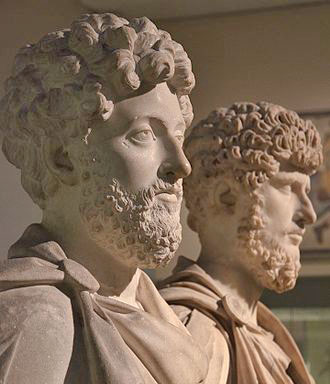 On 7 March 161 Antonius died. Marcus oversaw an orderly transition with both himself and his younger adoptive brother Lucius Verus becoming co-emperor. The Senate would have been happy to confirm Marcus alone, but he insisted the Senate confirm both himself and Lucius. Marcus had a much greater power base than Lucius, so if he had been power-hungry, he could have deposed of his brother and ruled alone. But, Aurelius felt a responsibility to fulfil the wishes of the previous emperor and he was happy to share the burden of ruling with Lucius. They continued many of the reforms and policies of the previous Emperors. This included some progressive reforms of reducing harsh aspects of civil law and improving the claims of blood relatives in inheritance. Marcus took his responsibility to act as judicial arbiter seriously; he heard many cases and responded to them with a careful understanding of the law. He was sympathetic to the freedom of slaves and the plight of orphans.

The reign of Marcus and Lucius was relatively popular. It helped that Marcus Aurelius was an excellent orator; he could appeal to the people’s sympathies and displayed great political tact. He responded to emergencies, such as the Tiber flooding its banks in 161, and the earthquake at Cyzicus by personally visiting the scenes and offering aid to the people. Marcus was widely considered a wise ruler. He himself sought to avoid the hedonism and selfishness of other Roman rulers. His meditations give an insight into the kind of ruler he wished to be:

“Take heed not to be transformed into a Caesar, not to be dipped in the purple dye, for it does happen. Keep yourself therefore, simple, good, pure, grave, unaffected, the friend of justice, religious, kind, affectionate, strong for your proper work. Wrestle to be the man philosophy wished to make you. Reverence the gods, save men. Life is brief; there is but one harvest of earthly existence, a holy disposition and neighborly acts.” – Meditations VI, 30

During their period of rule, they allowed free speech (the comedy writer Marullus was able to satirise the new emperors without penalty.) They generally rejected ostentation and excessive displays of ceremony and wealth and made provisions for poor children. Marcus also had good relations with the Senate. As Emperor he could act as dictator, but he frequently asked the Senate for permission to spend more money – reviving the days of the Republic.

However, his rule was not all progressive. His reforms were only piecemeal, and some developments led to a more regressive direction. During his rule, there was a new social division of criminal punishment with the development of two classes of people Honestiores and humiliores. Honestiores were higher social classes who were spared the more humiliating types of punishment.

During the time of Marcus Aurelius, Christians were persecuted at an increasing rate. The official policy was that practising Christianity was an offence, but the local authorities were not encouraged to seek out Christians. However, in times of crisis, Christians were often blamed for misfortune, and they were made into scapegoats. The responsibility for prosecuting Christians fell to local officials. It is not clear the extent to which Marcus approved, disapproved or felt powerless to act in these local prosecutions. 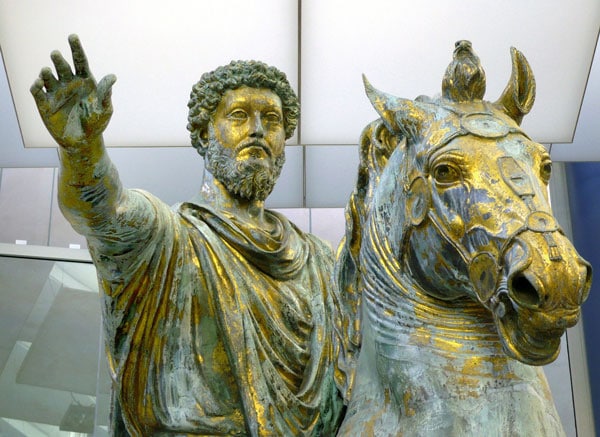 During the period 160-170, Rome was embroiled in border wars against troublesome neighbours. This included invasions from the Parthians in the east and Gaulic tribes invading northern Italy. Marcus and the Roman army were able to hold off the invaders, but the campaigns were costly, and the Roman people became aware that the once might Roman Empire was becoming more stretched financially and not quite the omnipotent power of former years. Marcus devalued the percentage of silver in Roman coins to try and keep up with rising costs. Returning Roman troops also brought back a deadly plague which spread throughout Rome and surrounding city for several years. The plague contributed to a sense of loss of invincibility – morale amongst both the people and the army fell. Marcus Aurelius strove to strengthen the Roman Empire during these troublesome times.

His wife Faustina gave birth to 13 children, though several died at an early age. He was survived by one son and four daughters. He nominated his son Commodus to be the next emperor when he was 16. Commodus ruled from 161–192 however, his reign marked a decline in Roman fortunes as he rejected his father’s policies and philosophy, and became increasingly dictatorial and brutal.

Throughout his lifetime, Marcus wrote philosophic ideas – which were collected into a book called Meditations. These meditations have been widely read and have cemented his reputation as a philosopher-king. In many ways, Aurelius was influenced by the Stoic philosophers, and so his Meditations give a good understanding of existing Stoic philosophy. He also took inspiration from Plato, Democritus, Euripides, Heraclitus and Plato. Though many of his ideas were not unique, it would be unfair to see The Meditations as only a regurgitation of other philosophers. They also reveal an insight into his personality and outlook on life. They illustrate his attempt to seek perspective on the fluctuations of earthly life and maintain an inner calm amidst the turmoil and fleeting nature of life.

“Remember that man lives only in the present, in this fleeting instant; all the rest of his life is either past and gone, or not yet revealed. Short, therefore, is man’s life, and narrow is the corner of the earth wherein he dwells.” – Meditations, III, 10

The Meditations give an insight into the religious beliefs of Marcus; it suggests a Deist like belief in a universal energy and harmony.

He also believed in fate and a law of predestination – though he still believed individuals should strive to live with nobility and strength of character.

“Whatever may happen to thee, it was prepared for thee from all eternity; and the implication of causes was from eternity spinning the thread of thy being, and of that which is incident to it.” X, 5

Marcus suggests the role of philosophy is to gain independence over your own emotions and passions.

“The mind is the ruler of the soul. It should remain unstirred by agitations of the flesh–gentle and violent ones alike. Not mingling with them, but fencing itself off and keeping those feelings in their place. When they make their way into our thoughts, through the sympathetic link between mind and body, don’t try to resist the sensation. The sensation is natural. But don’t let the mind start in with judgments, calling it ‘good’ or ‘bad.'”

Marcus died at the age of 58 on 17 March 180 in Vindobona (modern Vienna). The reason given for his death was natural causes. He was deified, and his ashes returned to Rome. A column celebrating his military successe in Europe was built in Rome. He was already regarded as a philosopher-king, and his reputation was helped by later Christians who viewed his rule favourably compared to other rulers. His Meditations survived – especially in the Eastern church and went on to become one of the most famous and influential writings in philosophy. Unlike other philosophers, Marcus had the advantage of writing with simplicity and directly – appealing to a wider audience.

It was the historian Edward Gibbon who described the five Good Emperors. The other emperors were Nerva, Trajan, Hadrian, Antonius Pius and Marcus Aurelius. Although they had absolute power, they ruled under the guidance of wisdom and moral virtue.

The Daily Stoic – at Amazon

“When you wake up in the morning, tell yourself: The people I deal with today will be meddling, ungrateful, arrogant, dishonest, jealous, and surly. They are like this because they can’t tell good from evil.”

“Never let the future disturb you. You will meet it, if you have to, with the same weapons of reason which today arm you against the present.” – VII, 8

“All things are implicated with one another, and the bond is holy; and there is hardly anything unconnected with any other things. For things have been co-ordinated, and they combine to make up the same universe. For there is one universe made up of all things, and one god who pervades all things, and one substance, and one law, and one reason?
– VII, 9

“Know the joy of life by piling good deed on good deed until no rift or cranny appears between them.” – XII, 29