Shirin Ebadi is an Iranian human rights lawyer. She has represented clients who have fallen foul of the Iranian political system and has been subject to intense scrutiny from her own government. She was awarded the Nobel Peace Prize in 2003 for her courage in defending human rights and democracy.

“Any person who pursues human rights in Iran must live with fear from birth to death, but I have learned to overcome my fear. ” (1999 interview ) 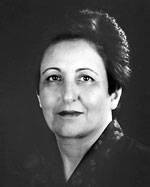 Ebadi was born in Hamadan, Iran on the 21st June 1947. A year later in 1948, her family moved to Tehran. Ebadi studied law at the University of Tehran and graduated in 1969; she later gained a doctorate’s degree in law. In a male-dominated society, she became Iran’s first ever judge. In 1975, she became the first president of the Tehran city court.

Despite opposing the rule of the pro-Western Shah and initially supporting the revolution of 1979, Ebadi was dismayed to find the new Islamic republic prohibited women from becoming judges and were marginalised from society. She lost her position as the president of the city court and was demoted to a secretarial position.

For several years, she campaigned to regain her legal career. Although her campaigns made her unpopular with the government, in 1993, she was granted a law office permit and was able to practise law. She later explained the motivation for fighting for her rights

“I compare my situation to a person on board a ship. When there is a shipwreck the passenger then falls in the ocean and has no choice but to keep swimming. What happened in our society was that the laws overturned every right that women had. I had no choice. I could not get tired, I could not lose hope. I cannot afford to do that.” (2006, interview with Harry Kreisler 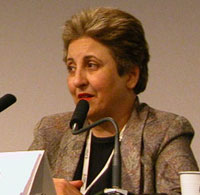 As a practising lawyer, Ebadi has been willing to take up the cases of unpopular dissident figures who have fallen out of favour with the political and judicial establishment. In one case she represented the family of Dariush Foruhar a dissident intellectual who was murdered in his home. This was during a period of several grizzly murders of intellectual figures – allegedly by employees of the Iranian ministry of intelligence.

In 2000, Ebadi produced videotaped evidence of Amir Ebrahimi confessing to the murder of a student protester – Ebrahimi said the murder was carried out under the direction of conservative members of the government. This confession was highly embarrassing and, as a result, Ebadi herself was put on trial for allegedly ‘manipulating’ evidence in producing this confession. Ebadi was sentenced to five years in prison (suspended) and had her law license revoked. This incident showed the dangers of confronting the Iranian establishment.

In 2003, she was awarded the Nobel Peace Prize for her work in promoting human rights in the face of difficult conditions.

“For her efforts for democracy and human rights. She has focused especially on the struggle for the rights of women and children”

The reaction from the Iranian government was muted with increasing criticism of the decision – the conventional response from the government was to say it was just a political decision. The Nobel committee stated that the award was partly motivated by a desire to reduce tension between the Islamic and Western world following the terrorist attacks of September 11th, 2001. (Nobel Prize facts) There have been reports her Nobel Prize was confiscated by the government, though they deny this

Since receiving the Nobel Peace Prize, Ebadi has used her high public profile to travel around the world speaking on human rights. With other female Nobel Peace prize winners, she formed the Nobel Women’s initiative. She has also agreed to represent political dissidents and members of Iran’s minority Baha’i community.

Although Ebadi is critical of the Iranian regime she has supported Iran’s right to pursue nuclear technology. She is against forced regime change and has stated the most important goal is to promote democracy and human rights in Iran.

“In the last 23 years, from the day I was stripped of my judgeship to the years of doing battle in the revolutionary courts of Tehran, I had repeated one refrain: an interpretation of Islam that is in harmony with equality and democracy is an authentic expression of faith,” Iran Awakening (2006)

Ebadi is a Muslim and argues that the religion of Islam is compatible with human and women rights, but in Iran, the authorities have been highly selective

“It is not religion that binds women, but the selective dictates of those who wish them cloistered. That belief, along with the conviction that change in Iran must come peacefully and from within, has underpinned my work.”

In 2012, she sought to launch an international campaign for human rights in Iran – in particular stressing the need to work for the release of three opposition leaders.

Iran Awakening: A Memoir of Revolution and Hope

Iran Awakening: A Memoir of Revolution and Hope at Amazon