Prophet Muhammad (570–632) Founder of Islam. Whilst in seclusion in a mountain cave, Muhammad reported receiving a series of revelations from God; these revelations form the verses of the Qu’ran, regarded by Muslims as the “Word of God” and around which the Islamic religion is based. Muhammad was a significant religious, political and military leader who helped to unite Arabia under the new religion of Islam.

Muhammad was born in 570 CE in the Arabian city of Mecca. Orphaned from an early age, he was brought up by his uncle Abu Talib. He worked as a merchant and shepherd and did not receive any formal education. Muhammad had spiritual inclinations and would spend time going to caves around Mount Hira to spend time in silence, prayer and retreat. He was also known for his generosity, devoutness and skill in arbitrating disputes. 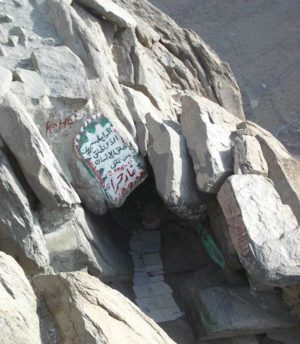 In the year 610, at the age of 40, Muhammad was undertaking a retreat of pray and meditation in the desert. During his prayer, he began hearing a luminous voice who commanded him to write down the word of God. At first, Muhammad was very uncertain about his experience, but after sharing with his first wife Khadijah and her cousin, he gained confidence that it was a divine voice, which he later revealed to be Angel Jibreel (Gabriel). For quite a few years, Muhammad only shared these recitations with his close companions who later served as scribes, writing down the revelations. He was aware that preaching a new monotheistic religious teaching may incur the wrath of the existing authorities. An important feature of the teachings of the Qu’ran was that there was only one God, and the essential aspect of life was to submit to his will.

In the beginning, he attracted a small number of followers, who were deeply moved by the teachings Muhammad imparted. This gave him the confidence to speak to other people in Mecca. However, the followers of Muhammad were viewed with hostility by other Meccan tribes who generally believed in a pantheistic world view (although there were small numbers of Christians and Jews). In 619, both his wife Khadijah and uncle (effective guardian Abu Talib) died. In this time, of personal difficulty, he had an important spiritual experience, where he felt his spirit transported to Jerusalem and then to Heaven where he saw himself with other prophets such as Moses and Jesus amidst the divine throne of God.

In 622 because of ongoing hostility, Muhammad with some of his followers, migrated to the city of Yathrib, now known as Medina. This migration is known as the Hijrah and marks the beginning of the Islamic calendar.

In Medina, Muhammad succeeded in uniting various tribes. He used his skill as an arbiter to smooth over tensions, and increasingly he was viewed as an adept and inspirational leader – combining strength and military skill with a compassionate and devout nature. At the Battle of Badr, just 313 Muslims under Muhammad’s leadership defeated a force of 1,000 Meccans. After this victory, Muhammad negotiated a peace treaty with the Meccan tribes.

In 629, Muhammad carried out a pilgrimage (haj) to Mecca. This spiritual journey became a pillar of Islam. But, a year later in 630, Meccan forces broke the fragile truce between the two peoples, so Muhammad led an army of 10,000 to the city of Mecca where he was able to decisively defeat the Meccan tribes. This military victory led to the establishment of Islam as the dominant religion of the area. Muhammad declared that the widespread diffusion of Islam in the area had enabled the ‘end of ignorance.’ After the battle, the old Polytheistic idols and images were destroyed. Muhammad’s teachings forbade the creation of new ‘idols’ and even the image of Muhammad is not allowed under Islam. Muhammad taught that idols and images could create vanity and ego and take people away from God.

During the remainder of his life, he was able to unite most of Arabia under the new religion of Islam. In 632, he gave his final sermon to 20,000 people – showing the extent of his influence and popularity. He died later in the year after suffering from a fever that lasted several days. His last words were:

After his death, he was succeeded by his father-in-law and close associate, Abu Bakr. For the next 100 years, Islam spread rapidly becoming the dominant religious and political force of the middle-east. By 750, Muslim influence stretched from India to Spain and was strongly established as a major world religion.

From his first experiences in the cave, Muhammad reported receiving messages from God throughout his life. These messages form The Qu’ran – which to Muslims is the word of God. Muslims believe Muhammad to be the final prophet in a tradition stretching back to Moses, Abraham and Jesus.

As well as the Qu’ran, Muslims study the Sira (Muhammad’s life) and traditions of the time (Sharia law).

The essential message of the Qu’ran is that there is no God but Allah, and followers should lead their lives in submission to the will of Allah as described in the Qu’ran.

Muhammad also believed religion was not just a private matter of conscience but something that affected the whole society. He instigated social reforms, which included the better treatment of all classes of people and the reduction of aristocratic privileges. The Qu’ran mentioning an alms tax. (zakat) which sought to reduce inequality in society. Muhammad insisted that new tribes who wished to ally with himself should apply this tax.

For his time, Muhammad instigating progressive reforms. He condemned some customs such as female infanticide and excessive privilege. He enhanced the rights of slaves, though did not abolish it completely

Muhammad taught the concept of Jihad. First and foremost ‘jihad is the internal struggle against man’s weaknesses such as lust, envy and hatred, and the struggle to become a better devout person. Jihad could also involve the outer battle against enemies who wished to prevent the devout from practising their faith.

The name Muhammad means “Praiseworthy.” Muslims he was not a divine figure, but was close to a perfect man.

In the list of 100 most influential people in the world, Michael Hast chose Muhammad to be number one, arguing that Muhammad was influential in both the religious and secular world. Muhammad changed the course of history by creating a strong monotheistic religion amongst the Arab world and unifying the disparate tribes. The teachings of the Qu’ran act as a major influence on Islamic society. Like all religions, the teachings of Muhammad have often been misinterpreted and used in the justification of fanaticism – in particular the concept of Jihad is open to different interpretations as to what is meant by defending the faith. Also, quite a few Muslim practises, such as women wearing the veil came in – many years after he had died.

Muhammad: His Life Based on the Earliest Sources

Muhammad: His Life Based on the Earliest Sources at Amazon

– The Second Muslim Caliph and confidant of Muhammad.