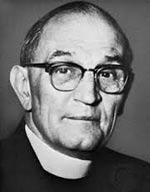 Martin Niemöller (1893-1984) was a German Protestant who spent seven years in Nazi concentration camps for opposing the religious policies of Hitler. After the war, he became a prominent member of the Peace Movement. He achieved renown for his poem ‘First they came for the Communists…’

Martin Niemöller was born 14 January 1893, in Lippstadt, Prussia, to a deeply conservative Lutheran family. During the First World, he served as an officer in the German navy. Niemöller worked on several submarines which attacked allied shipping. By the end of the war, he had become commander of his own U-boat SM UC-67. He was successful in sinking many Allied ships around the port of Marseille; and as a result was awarded the Iron Cross, First Class.

After the war, Niemöller shared the views of many conservative military officers. He rejected the democratic Weimar government which replaced the Imperial German government of William II. He resigned his commission and tried to make a living as a farmer. However, because of insufficient funds, he gave up on this idea and returned to his earlier aspiration of becoming a Lutheran pastor, like his father. In 1919, Niemöller began four years of studying Protestant theology in Munster.

In 1919, he also married Else nee Bremer; they remained married until she died in a car crash in 1961. During the turbulent inter-war years, Niemöller remained a strong national conservative. During the Ruhr uprising of 1920, he left his studies to take command of a battalion in the paramilitary Freikorps – a group of right-wing former military officers, who would later form the nucleus of Hitler’s new Nazi party.

Niemöller was a strong conservative who was fearful of the ‘atheistic’ Social Democrats and Communists. He also had little regard for democracy and was broadly supportive of Hitler’s rise to power. He voted for the Nazi party as early as 1924 and spoke about the desirability of having a strong ‘Führer’. In 1932, he had a private audience with Hitler, where Niemöller noted that Hitler promised he would not interfere in the affairs of churches; Hitler also told Niemöller he would not hold pogroms against the Jews – only keep them from high office. At the time Niemöller believed Hitler, and welcomed his assumption of power in 1933, hoping it would lead to a German national revival. Niemöller later spoke about how he felt he had been duped by Hitler. In 1933, he wrote a book from the U-boat to Pulpit -this offered a right-wing nationalist view of the First World War and was popular with Nazi members, selling 90,000 copies in the first few weeks.

As the persecution of Jews and political opponents in Nazi Germany increased, Niemöller became concerned at the persecution of Christians of a Jewish background. In 1934, with Dietrich Bonhoeffer, he founded an organisation of Pastors to combat the rising discrimination of Christians of Jewish ethnicity. However, Niemöller held anti-Semitic views himself and remained a supporter of Hitler. He believed Jews shouldn’t seek public office and in one sermon expressed the belief, that the persecution of Jews in history was a result of their complicity in the crucifixion of Jesus Christ.

In 1934, he helped to found the Confessional Church a Protestant group opposed to the Nazification of German Protestant churches.

In 1936, he unequivocally opposed the Aryan paragraph which asserted the supremacy of the Aryan race. Niemöller held this was incompatible with concepts of Christian charity. Niemöller signed the petition of Protestant churchmen. In his last sermon before his arrest, Niemöller spoke of his need to speak out.

“We have no more thought of using our own powers to escape the arm of authorities than had the Apostles of old. No more are we ready to keep silent at man’s behest when God commands us to speak. For it is, and must remain, the case that we must obey God rather than man.”

This opposition led to a mass arrest by the Nazis of Christians opposing Nazi ideology. Niemöller was arrested on 1 July 1937. He was tried at a special court receiving a fine and seven-month sentence. Because he had already served his sentence awaiting trial, he was released. However, as soon as he was released by the courts, he was rearrested by the Gestapo and interned in Sachsenhausen concentration camp. The SS hoped to re-educate Niemöller; it is likely he could have been released had he changed his views. But, he refused to renounce his opposition to the religious policies of Hitler. Niemöller may have been executed in 1938, but a campaign in the British press about the Nazi mistreatment of Christians, such as Niemoller, led Hitler to fear bad publicity and reject the request for execution.

At the outbreak of the war in 1939, Niemöller wrote a letter to Admiral Raeder offering to serve in the German navy, though this request was refused by Goebbels. Niemöller was to be held as a prisoner in Sachsenhausen and Dachau concentration camps until the end of the war in 1945.

During his time in the concentration camps, Niemöller experienced great hardship and privations, but as a more famous prisoner, he also received marginally better treatment. It was said, some SS officers wished to keep him alive to use as a possible bargaining tool. In April 1945, he was transferred away from the advancing Allied armies to Tyrol with other prominent prisoners. The prisoners were liberated by the US Fifth army on May 5, 1945.

After the end of the war, he was a controversial figure of resistance to Hitler. Niemöller admitted offering to serve in the German navy in 1939. He also had limited his opposition to Hitler focusing only on protecting his church.

During his time in the camp and after the war, Niemöller had time to reflect on his views and he came to release he had been naive to believe in Hitler. He challenged his own anti-Semitic views and came to believe he had not done enough to speak up for other people. He admitted he was only concerned about protecting his own church and not the whole nation. This led to his famous writing, which became a symbolic message about the holocaust.

“First they came for the Socialists, and I did not speak out
— Because I was not a Socialist.

Then they came for the Jews, and I did not speak out
— Because I was not a Jew.

Then they came for me
–and there was no one left to speak for me.”

(Note: there are several variations of this poem/message)

After the war, Niemöller was keen to atone for his past and promote peace and reconciliation. Niemöller stated that Germans had to accept responsibility for the holocaust. In a sermon in 1946, he stated his own guilt.

“We must openly declare that we are not innocent of the Nazi murders, of the murder of German communists, Poles, Jews, and the people in German-occupied countries. No doubt others made mistakes too, but the wave of crime started here and here it reached its highest peak.”

It was a stance that was often unpopular, as many Germans were not ready to admit guilt or their part in the crimes of the Nazis.

As President of the Protestant Church in Hesse, he initiated the Stuttgart Declaration of Guilt, signed by leading figures in the German Protestant churches. This declaration stated the church had not done enough to protect the victims of Hitler.

“Through us infinite wrong was brought over many peoples and countries. That which we often testified to in our communities, we express now in the name of the whole church: We did fight for long years in the name of Jesus Christ against the mentality that found its awful expression in the National Socialist regime of violence; but we accuse ourselves for not standing to our beliefs more courageously, for not praying more faithfully, for not believing more joyously, and for not loving more ardently.” (October 19, 1945)

After meeting the nuclear chemist Otto Hahn, in 1954 Niemöller became an ardent pacifist and campaigner for nuclear disarmament. Niemöller was also influenced by reading Christs’ Sermon on the Mount. An ardent anti-Communist before the war, Niemöller became more sympathetic to Socialist ideals and more critical of materialistic capitalism. He also spoke against the growing Cold War and supported the Campaign for Nuclear Disarmament. He spoke about the new Japanese constitution in positive terms:

“The renunciation of war as expressed in the Japanese Constitution has given a first ray of hope to a world in darkness and despair.”

In 1965, he upset the US when he took part in a controversial visit to North Vietnam, during the height of the Vietnam war. He spoke warmly of Ho Chi Minh.

“One thing is clear, the president of North Vietnam is not a fanatic. He is a very strong and determined man, but capable of listening, something that is very rare in a person of his position.”

He was awarded the Lenin Peace Prize in 1966.

Martin Niemöller was a controversial figure of resistance to Hitler because, in his early years, he sympathised with many aspects of the Nazi’s and even volunteered to serve in the German navy in 1939.

However, after the war, he never sought to hide his mistakes and admitted he was wrong to have supported Hitler. Although he didn’t speak up for other groups, his actions in opposing Hitler on religious policy took considerable courage, given the nature of the police state. Niemöller’s views continued to evolve during his life. After the war, he dropped his nationalistic, anti-Semitic and conservative views becoming a radical peace advocate.

“I have never concealed the fact and said it before the court in 1938 that I came from an anti-Semitic past and tradition… I ask only that you look at my life historically and take it as history. I believe that from 1933 I truly represented the Lutheran-Christian outlook on the Jewish question — as I revealed before the court — but that I returned home after eight years’ imprisonment as a completely different person.”

He himself remarked on how strongly he changed his views during his lifetime. He said I started my political career as:

“an ultra-conservative who wanted the Kaiser to come back; and now I am a revolutionary. I really mean that. If I live to be a hundred I shall maybe be an anarchist.”